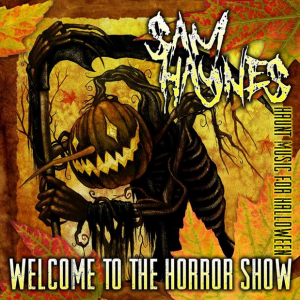 The mysterious musician known only as “Sam Haynes” has built up quite the reputation for himself since he first appeared on the scene in 2012. The UK-based Haynes’ debut album Halloween Carnival proved so popular that his works has been featured at theme parks in both his home country and the US, along with being used in various movie trailers. Outside of albums, his remixes, collaborations and free downloads have ensured his presence in numerous podcasts, including the legendary Nightmare City Halloween. So let’s jump right into his newest release, Welcome to the Horror Show, and see what all the fuss is about!

“All Hallows” has a spooky music box-style opening, which is soon followed by creepy violins, wordless vocals and some little electro touches. The electro influence continues (and increases) in “Ghost House,” which opens with a sample from the original 13 Ghosts about ghosts being restless and hungry. The combination of spooky organ work and drum beats has more of a dance-like feel to it than the last track. While it does have plenty of spooky touches that could allow its use in a haunt, I recommend using it either at a Halloween party or in the waiting area of your haunt. The dark, heavy introduction of “Shadows” provides a sense of creeping that is nicely aided by touches of wordless female vocals. Like the last track, “Scarecrows” can work with a wide variety of haunt scenes in addition to the type implied by the title. Listeners are sure to love the steady and spooky piano work combined with the occasional use of soft wind effects and other striking touches. If you go the scarecrow route and really want to freak out your guests, have a monster of some kind hidden under the hay pile in front of the scarecrow. Since they’ll be expecting the scarecrow to do something, being attacked from below will really shock them! We head back to the dance floor with “Zombie,” which has samples of the newscast from Night of the Living Dead peppered throughout it. The catchy beat is electr0wned and has almost carnival-like feel at times, along with various little eerie touches (you’ll recognize them immediately once you hear this). Do you have a room filled with creepy dolls? Then you’ll be sure to love “Doll House.” In addition to the soft chiming music box notes, there’s an orchestral interlude which gets a little louder and somewhat jauntier as time goes on. “Ghost Train” has some very soft electro noises at the start which remind me of crickets. They get overtaken by other music, but are always present. The moody piano music is one of my favorites, although the eerie music break that fills in for it is great too. There’s occasional heavy or spooky intrusions at times, along with very soft wordless female vocals. If you’re looking for something special for a slasher room, this is the way to go.

The heavy but low opening of “Midnight” makes for a very intense and scary buildup. This can be used with any spooky scene and I should also note how the occasional wind effects that pop up at times are different from the ones used in other tracks. “Seance” has a similarly soft and intense opening, but adds more musical touches. There’s a sense of unease and the unknown, along with some music box-like notes at times. You should definitely use this in your haunt’s (or party’s) staged séance. Failing that, it also works wonders with a moving Ouija board. Tolling bells bring us into “31-13,” which are joined by spooky organ music with lighter work later layered on top. There are some some creeping notes at times, but the organ and constant bells reign supreme. This does have general use potential, but I also think it has an ‘out in the city at night’ feel that allows its use in a scene with Jack the Ripper or a plague doctor. “The Dark” has a light, but urgent opening. Although it has some creepy electro touches, it also has a timeless sort of feel to it which are aided by some wordless female vocals. Speedy strings start off “Halloween Night,” but eerie music slowly comes in. There’s a light, almost carnival or circus feel at times, along with some “dance breaks,” but it gets spooky again. Speaking of material good for your next haunted circus setup, “Midnight at the Funhouse” should also interest you. Those without any killer clowns will still appreciate it due to its general spooky feel and soft light opening organ making up much of the track. The wordless female vocals and electro touches are eventually joined by a soft circus feel. However, said music slowly creeps in but never takes over. This is also the lengthiest track, thanks to its running time of over six minutes. “Endless Nightmare” is another spooky/dance combo. It’s filled with light chiming and catchy beats and is even similar to parts of “Zombie” at times. There’s also plenty of has music box-esque parts, wordless female vocals, horror stingers, and even ghostly wooing which should remind Halloween enthusiasts of a classic 90’s decoration. “Ghost House (Fettdog remix)” starts off light and creepy, but gets heavier “industrial” feel as time goes on. In fact, parts of it remind me of “Closer” by Nine Inch Nails. The practically inaudible opening buildup of “Scarecrows (Cheekyboy Dub)” leads to light music. It uses more of the original than Fettdog’s remix, including the soft wind sounds sprinkled throughout it. Different music replaces the lighter material that’s layered over the original piano work, but it’s not as overtly dance-y as the last one. It’s still enjoyable, though. In “Witching Hour,” eerie strings lead to exotic Middle Eastern-type music. This could easily be used in a mummy–themed room. Finally, “Spirit Box” can be used in many different types of haunt scene thanks to its very soft, very slow piano that’s both understated and creepy.

Welcome to the Horror Show is an excellent choice for those looking for a selection of music for both a haunted attraction and a Halloween party. It’s also notable for being the first album whose liner notes mention Gravedigger’s Local 16! How did this happen since I didn’t review it until after the album came out? It’s actually quite simple: Sam Haynes did it as a way of saying thanks for us featuring his work on our podcast many times in order to build interest for my (then) planned review of his work for 2014 (which I knew I simply had to do once I heard selections off his first album). The fact his work is great didn’t hurt either. But even without this pleasant surprise, I’d still love this album. I think you’ll agree once you pick this up and have a listen for yourself.

Bad Behavior has blocked 1241 access attempts in the last 7 days.