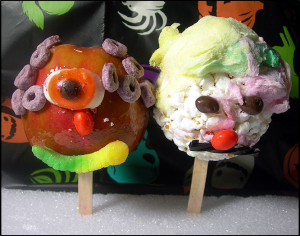 The Google Books preview for Making a Monstrous Halloween: Themed Parties, Activities and Events by Chris Kullstroem has recipes for “The Addiction,” “The Butterscotch Potion,” “The Dessert of the Dead” and more!

Similarly, the preview for Audrey Thibodeau’s Grandmother Used to Say shows hoe to make “Witch’s Magic Nut Cake,” “Black Cats” and “Ice Cream Jack-o-Lanterns” while the one for The Magic of Jell-O offers the classic that is “Dirt Cups.”

Kraft Foods has an intriguing recipe called “Gravedigger’s Delight” and I found a recipe for “Candy Corn on the Cob” on Facebook of all places! Similarly, Tumblr has a recipe for “Kaiju Sushi.”

Although the link for these “Bleeding Heart Cupcakes” comes from YumSugar, I originally found it at the recipes section of HauntProject.com. Thankfully, their selection offers more than just desserts. Similarly, the Monster Page of Halloween Project Links led me to the recipes needed for those who want to know how to set up a Halloween-themed dinner party.

Although FEARnet does offer recipes for sweets like “Witches Fingers” cookies and “Children of the Corn Fritters,” they also have other types of recipes available.

Finally, The Dinner Macabre is an amazing resource for spooky food recipes.

UPDATE: With the demise of FEARnet, please accept these alternate sources of recipes for “Children of the Corn Fritters” and “Witches Fingers” cookies. And since I had to remove two recipe repeats, let’s enjoy Betty Crocker’s “Spiderweb Deviled Eggs” and “Mummy Toes” (along with some other treats).

Special thanks to Dinosaur Dracula for use of the image!

Bad Behavior has blocked 953 access attempts in the last 7 days.