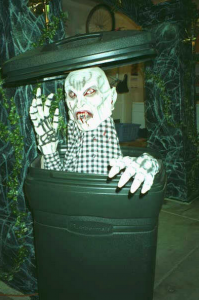 The year was 1996. That’s when Larry Lund contacted Mid-Island Appliance to obtain some used washing machine solenoids to use for the creation of Halloween props. As it turns out, owner Carl Chetta was also interested in mechanical Halloween decorations and was especially interested in Lind’s plans to pump air through the solenoids instead of water. Becoming fast friends, Chetta later contacted Lund with his plans for a new creation: the Trash Can Trauma! This wasn’t a simple pop-up head like you would see at a carnival haunted house. Instead, a trash can’s lid sudden rises to reveal a monster whose arms swipes out at you!

Naturally, the prop was a smash hit when the plans were posted on the internet in 1997 and numerous variants soon followed. Some shake around before the monster pops out, some activate lights or fog once the lid opens and others play sounds or use things other than the standard humanoid monster. Some don’t even use a monster at all! Others simplified the design so that it is quicker and easier to build while other focus on just making a head pop out. The return of the basic pop-up design led to people designing versions based around pillars, wells, tombstones, toxic waste barrels and even flower pots!

Chetta later created a variant of sorts called the Mail Box Trauma. That said, it should be noted how a similar effect did exist in the early 90’s (although the exact mechanism used to power is admittedly much different than Chetta’s). The Trash Can Trauma’s popularity also inspired the name of the Coffin Coronary automated prop. But if you’re looking to catch people unaware, you should really go with the classic version of the Trash Can Trauma that swipes its arm at people. That seemingly innocent trash can gets ’em every time…

Special thanks to Creep Crafters for use of the image!

Bad Behavior has blocked 849 access attempts in the last 7 days.