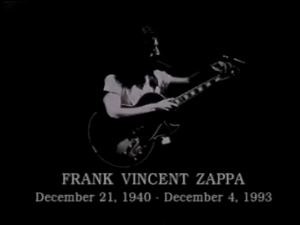 The above is a still taken from the end of the Mystery Science Theater 3000 episode “Village of the Giants,” broadcast on January 4th, 1994. That was the episode with ‘The Greatest Frank’ or ‘Frank About Frank.‘

Around the time of his passing, the classic rock station in that Northeast corner of New York State, the ‘little house where I used to live,’ played a ‘Power Play’ of his music: half an hour of Frank Zappa on commercial radio. It was a rare thing and it’s a shame that it took him dying from prostate cancer to get his name out, to where a barely-teenage weirdo like myself could hear. It was more the name. Frank ZAPPA. So weird, with its z-fronted-plosive heavy last name. Add that my favorite show at the time had a tribute to him at the end of an episode, and I figured “I should know more about this guy.”

There are more profound places writing tributes to him today (or not. It’s been 20 years, after all.) My own personal offerings could be considered the stupid shit I’ve done in the name of being a fan: buying a copy of the (formerly) long out of print book Them Or Us off a dude in Las Vegas for 50 bucks; seeing Project/Object as one of my first concerts over in Burlington because it had not just Ike Willis and Napoleon Murphy Brock, but the great Don Preston in the band as well; being talked out of getting Zappa’s facial hair tattooed on my leg; writing to the Lagunitas company if they had any extra bottles of their Frank Zappa inspired beer, getting copies of the labels in return; commissioning a great Brit to do a cartoonish portrait of Zappa, one I still need to get framed; buying every book or related CD that might offer either a different insight or a particularly interesting cover of a song. 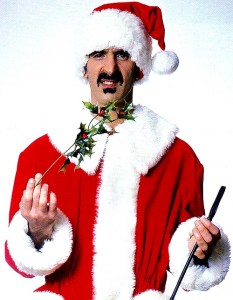 Of course, when I digested everything about Frank Zappa, I found out everything – warts and all. I remain a fan of his music but yeah, Frank Zappa was an asshole. That Zappa avatar included the text ‘Rock’s Greatest Shithead’ underneath, to acknowledge that his misogynistic (not in ‘women are inferior to men’ but ‘the wife should stay at home to raise the kids while I go out on tour and fuck groupies’ manner) tendencies. He wasn’t perfect and, when that’s understood, a person’s devotion shouldn’t be either.

The thing is, these things don’t make me a superfan. They make me just a regular Zappa fan. The Onion article “Frank Zappa Fan Thinks You Haven’t Heard The Right Album‘ gets us perfectly. We’re obsessive, dismissive (I eschewed punk for the years I should have been listening to it because of some stupid offhanded remark by Zappa) and annoying. I tried to get most of my friends to listen to his music but, and I’m proud to say this, not in a way that made me lose friends. But, I still tried.

I’m not doing anything special to honor the day. Yeah, I got his discography loaded up; most of it, at least. I stopped buying every new release since the Zappa Family Trusts overcharges for their CDs. Sixteen bucks+shipping. Ungodly. The unofficial holiday between the 4th and the 21st is referred to as Zappadan, and in prior years I did some dumb shit as part of the fake celebration. For a man who refuted the Christian church so often, making a religious ceremony out of his death and birth is hilarious to me.

Though, in 2010, I tried to create a tumblr where I summarized each FZ release in 70 words to honor his 70th birthday but Tumblr’s format sucks in terms of scheduling a post. Instead of doing one post every hour per day, they were all posted at once an out of order. Maybe there’s some younger fan who’s doing some crazy shit like eating nothing but FZ related foods or watching 200 Motels 200 times in a row. I think I’ve done my stupid fan shit already. I’m going to listen to his music. I started my day listening to “Watermelon in an Easter Hay” over at Zappa.com. Every year, the splash-page is a candle and the song that Zappa wrote out of Joe’s Garage to be the very last song every played. His son, Dweezil, has recently started playing the song live on tour with ZAPPA PLAYS ZAPPA. There’s a guy who’s stuck in a bad devotional situation.

It sucks that he died. But, it was nice that he got a chance to live. As you can imagine, with the timing of his death, Zappa’s been a part of the Christmas season. For a while, the words “Anything Zappa” what I wanted for Christmas. When thinking about if Zappa did anything Christmas related, outside of the photo above, I thought of the following song from the Mothers of Invention’s second album. Hope you enjoy.