I’ve been working on this particular project for a while, which is a bit embarrassing. In theory this is a trivially easy prop- a mummified finger. What made it so time consuming is that I wanted to do it with old school gaff techniques while making it realistic enough to meet modern presentation standards.

Part of the problem with doing it retro-style is the dearth of information about the actual manufacture of carnival and sideshow attractions. Some vintage pamphlets from gaff makers have survived, but they don’t contain any specifics about techniques. The high end of the craft is maddeningly opaque because the practitioners were so tight lipped. When they died their secrets went with them.

We know from surviving documentation and examples of their work that most pre-WW II gaffs drew on two traditions- taxidermy and puppet making. The taxidermy school used the body parts of dead animals to manufacture gaffs, while the puppet making contingent relied on sculptors working with malleable materials like rubber and paper mache. There was also some crossover between the schools. Puppet-style works were sculpted over animal skeletons, while taxidermists used paste and plaster to modify the shape of preserved animal specimens.

I’m drawing on the techniques of the puppet-style craftsmen. Paper mache is cheap and easy to work with, but can produce amazing results in the hands of a skilled artist. And, lets be honest, it’s a lot more socially acceptable than doing taxidermy on the dining room table. Bringing home some road kill for a new project is likely to result in many a night spent sleeping on the couch. 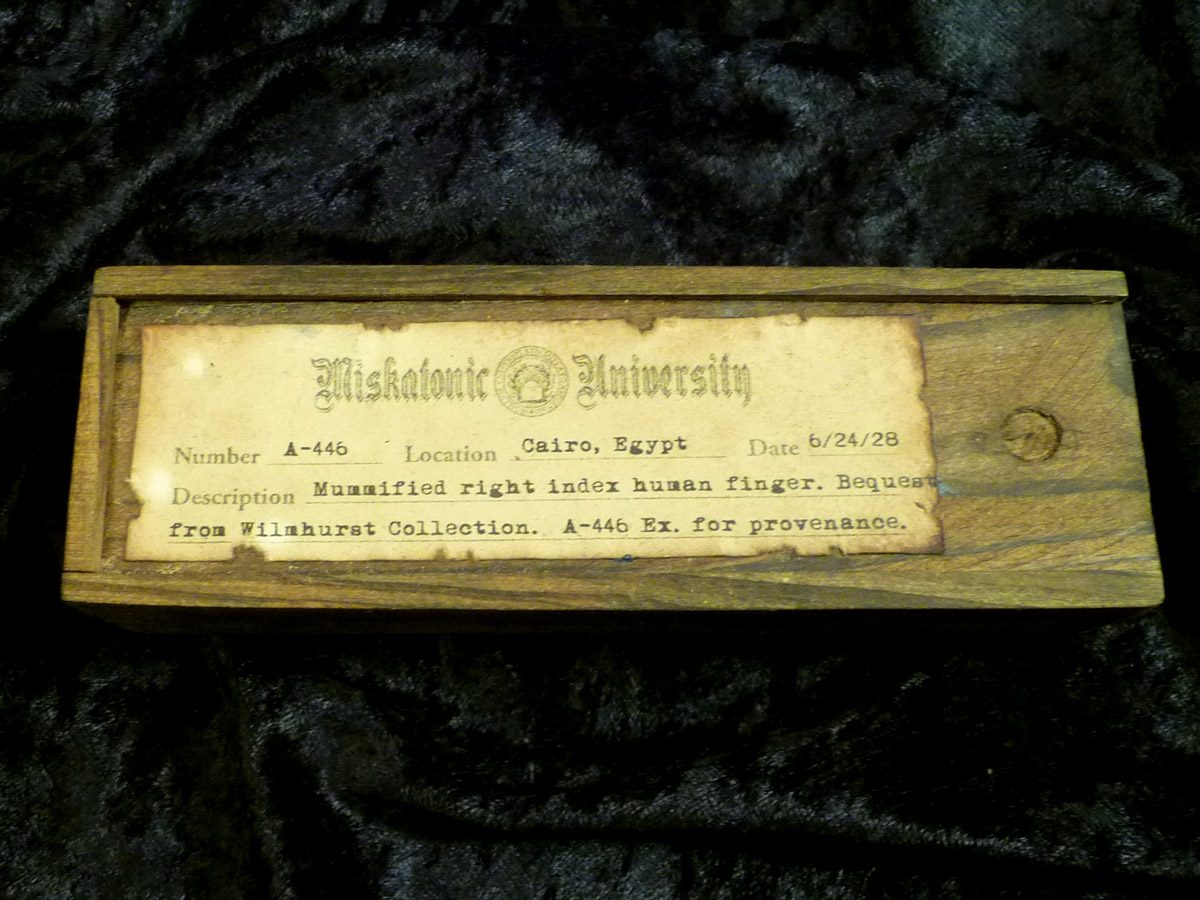 We start with the presentation. It took forever to find a box that was the right size, but I finally stumbled across this one at the dollar store. It was originally a storage box for puzzle pieces and measures 6″ by 2″ by 1 1/4″. Some sanding and a coat of stain gave it a suitably weathered exterior. The label is a re-sized version of a stock specimen label. After printing I trimmed it to size, applied the edge distressing, and tea stained it. 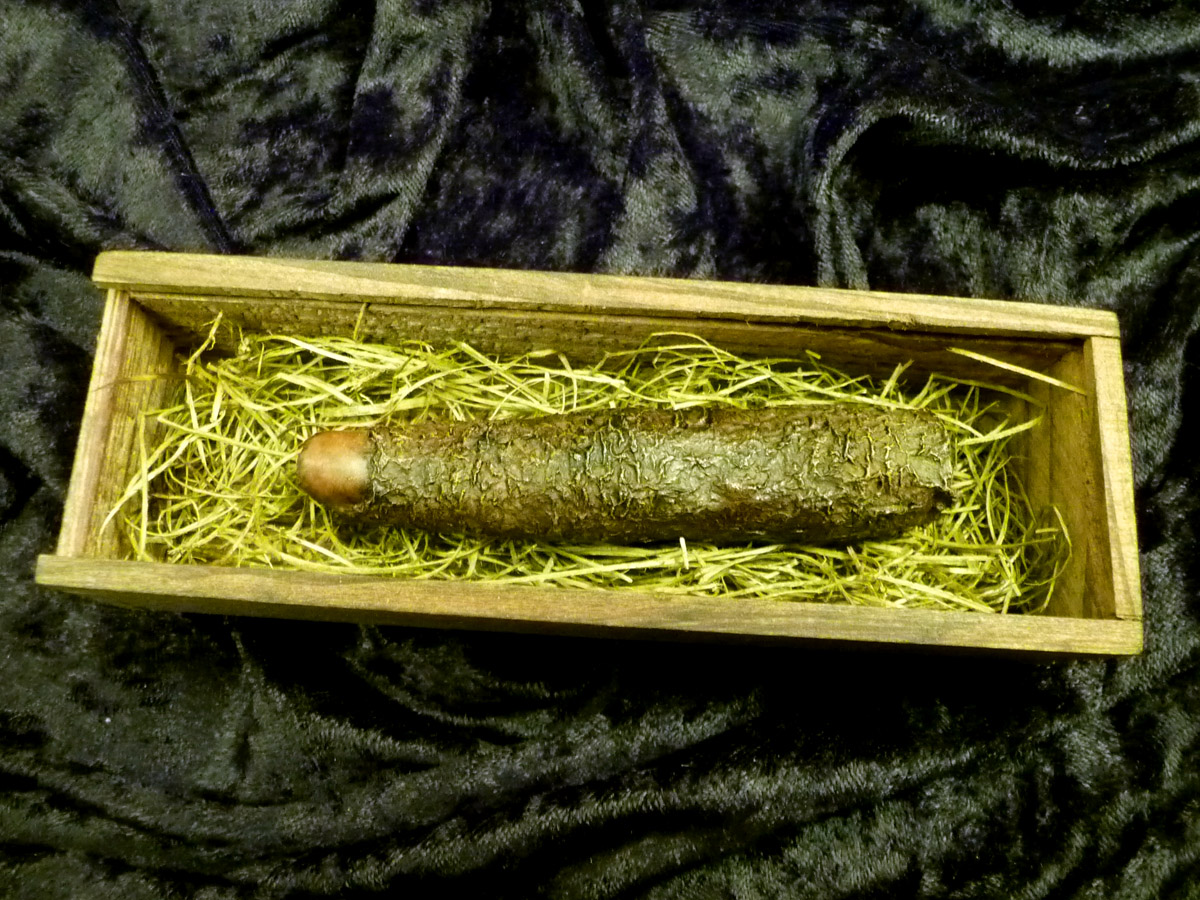 The finger itself. The core is a bamboo skewer. I measured the joints on my right index finger and bent corresponding ones in the bamboo after soaking it in hot water. The joints and body were then bulked out with glue saturated cotton fiber. It’s a vintage technique for building puppet armatures and it’s unbelievably strong thanks to its composite nature. The cotton fibers and glue mimic modern carbon fiber and resin, producing a final product that’s stong in both compression and tension.

My references for the sculpt were pictures of actual mummy fingers and my own hand.  I wanted something between the bony structure of a true mummy and the relatively normal proportions of a specimen preserved with salt or natural tree resin.  Dessicated, but still fleshy.  On that front I think I was successful, but the final result is probably a bit too plump.  The dried flesh should more closely mimic the contours of the underlying bone.  I write that off to the preservative effects of being an occult artifact. 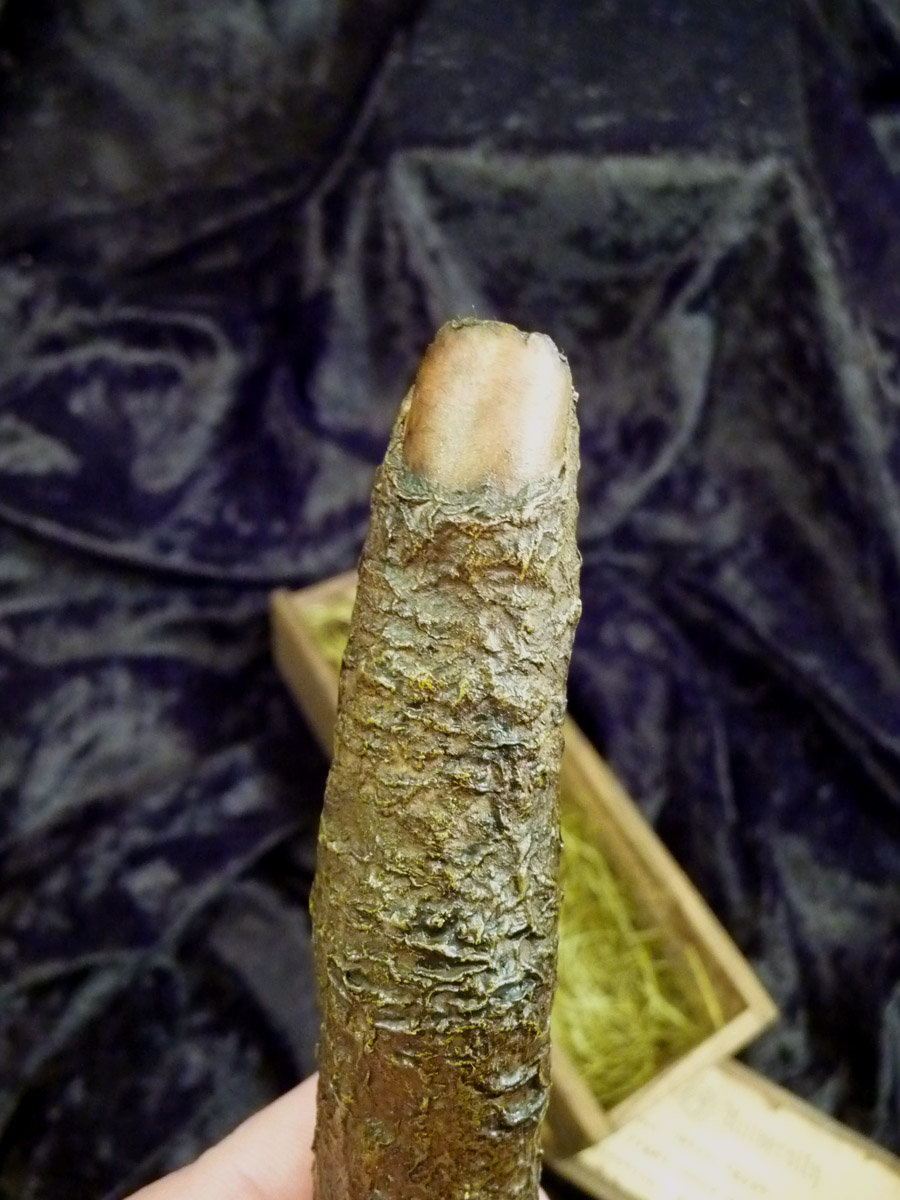 A closeup of the finished gaff.  One of the hardest parts of the sculpt was the slight curve of the finger.  Each joint segment needed a tiny bend, with the fingertip having the most noticeable angle.

Getting the nail right was an exercise in frustration.  I didn’t particularly want to try carving a nail from horn, so I broke from the pure retro rules and used some light packaging plastic for the nail itself.  I trimmed out the basic shape and used a heat gun to get the surface curve right before giving it a light sanding and adding a bit of wear to the nail tip.  It was then laid in a bed of paper pulp for final positioning.

There were two small details that I really wanted to capture here.  The first is the slight retraction of the flesh of the fingertip under the end of the nail as the finger mummified.  The second is the similar shrinkage that takes place just at the edge of the nail bed.  The nail itself rests on the relatively tough attachment point for the flexor tendons, but they immediately branch to the right and left to produce a fleshy gap immediately behind the nail.  That produces a concave dip as the fat and tissue in the space contracts during drying.  In the picture above you can see that slight constriction.

The final skin was built up with tissue paper and dissolved pulp mixed with starch and a bit of glue.  I sculpted the folds of skin along the joint lines with a finely tipped dental tool.  This, ultimately, was a mistake.  I didn’t take the shrinkage of the pulp mixture into account when adding the slight dimple at the joint at the same time as the skin folds.  The dimple is there, but it’s shallower than it should be because the pulp shrank excessively as it dried.. 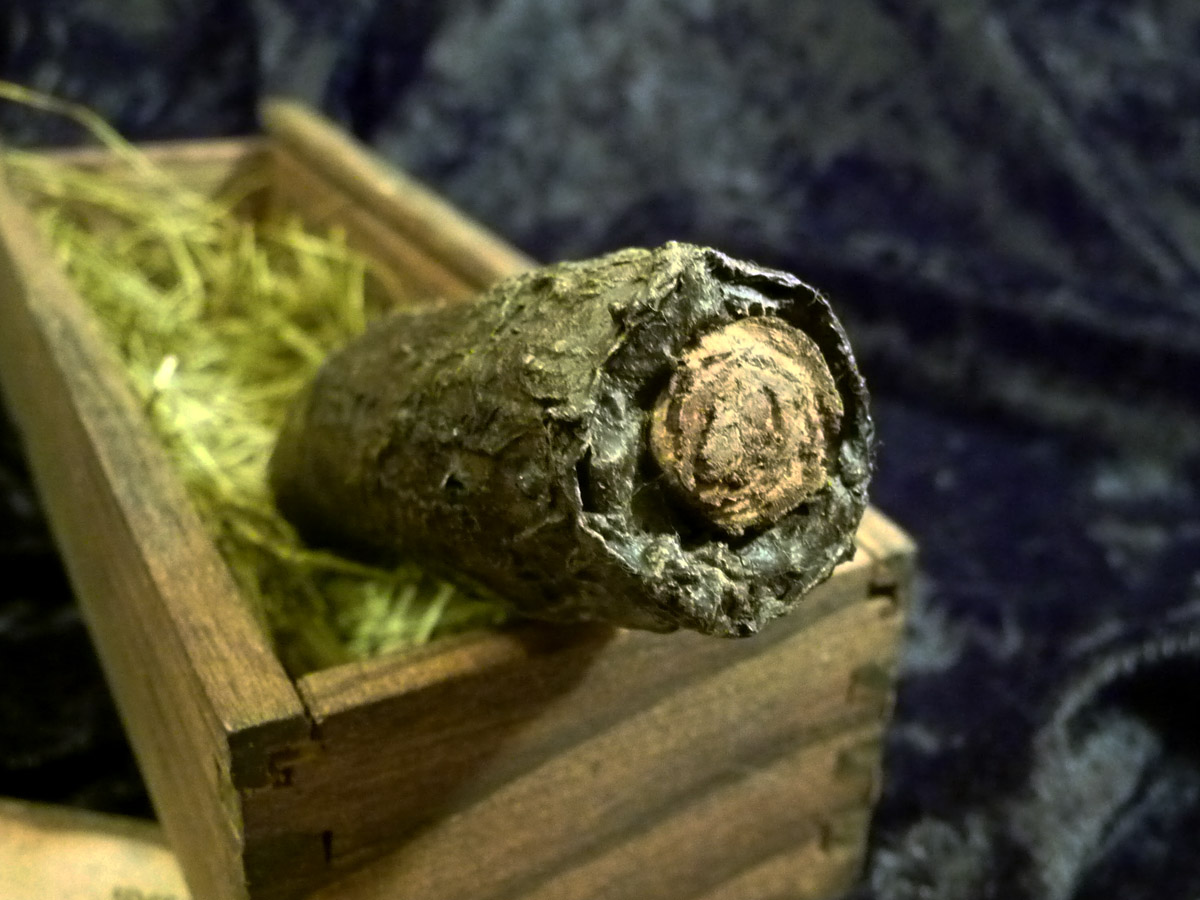 The end of the finger, with the nub of the metacarpal bone visible.  This is another one of those little details I wanted to capture.  Most gaffs like this don’t show any real anatomical detail.  The finger just kind of…ends.

One of my goals here was to have a clear distinction between the skin, the underlying tendons and flesh, and the stub of the severed bone.  I also wanted to capture what actually happens as an amputated finger is mummified.  The bone is stable, but the tendons shrink along their axis of contraction while the skin tightens inward.  To recreate that I first built up the structure of the dried tendons over the bone with cotton fiber and let it dry.  The skin was done separately.  I spread a thin sheet of tissue paper on glass and misted it with diluted glue to build up it’s stiffness without building up too much thickness.   When it was dry I applied some fine pulp to one side and wrapped it around the tendons, trimming it to size and blending it in to the rest of the finger with more pulp.

The finish was pretty straightforward because the paper mache was pre-tinted with dark brown pigment that acted as my base color.  Over that I wet sponged some mid-tones and light brown along with just a hint of green.  The final surface treatment was tinted paste wax.  That gave some depth to the color and produced the glossy effect of flesh treated with resin.

All in all this turned out to be a pretty solid piece.  I’d give it a 7, maybe even an 8, out of 10.   It may seem from my narrative that I’m dwelling on relatively small details most people won’t even notice, but there’s a reason for that.  This isn’t a display prop.  It’s meant to be handled and closely examined and has to stand up to scrutiny that a gaff under glass or in a display case would never have to deal with.  From a foot way things like tendon attachment points don’t matter, but when someone can hold it next to their own finger and compare the two it’s something you have to pay attention to.