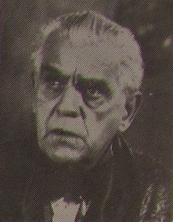 If you want to please an actor who spends all his time on movie sets and otherwise before the camera making horror “entertainment” then shudder at the mere mention of his name. Then and only then does he know he has “arrived” in the most elite upper crust of horrordom.

Such a one is Boris Karloff and no one who has ever seen him on-screen can argue that point. If you haven’t been exposed to his special kind of menace on the screen, hurry to the Leathbridge Theatre where “The Terror” is being played and you’ll quickly see what we mean.

He is best known as the screen’s “Frankenstein” even though he has not portrayed a Frankenstein since 1935 when he did “The Son of Frankenstein,” the third of the series. Of course, he has other horror roles to his credit but it was his Frankensteins that won him acclaim as the greatest terror character actor in motion pictures and a worthy successor to the late Lon Chaney, who in his day, was undisputed champion.

Off-screen, the “Real” Boris Karloff is cultured, soft-spoken, an English gentleman whose real interests are flower gardens, poetry, the legitimate stage and world affairs. He is a devoted husband and father, an avid fan and follower of the English spectator sports, cricket and rugby.

But on-screen, every Karloff movie is a scary one and “The Terror” ranks right up there with the best of them. As the Baron von Leppe, wandering around in his isolated castle and being haunted by far, far more than memories, he is a truly ominous character.

Jack Nicholson and Sandra Knight furnish the young lover romantic interest, while Dorothy Neumann is an old woman you wouldn’t care to meet after dark. Richard Miller and Jonathan Haze add to the intrigue amidst sets that are lavish and mood-provoking. Part of the action takes place in wooded mountain country famed for its beauty.

“The Terror” as produced and directed by Roger Corman and is an American International release in conjunction with The Filmgroup, Inc. It was filmed in Color and Vistascope.

[This post is based around one of many prepared articles included in the pressbook for The Terror. With the exception of adding a theater name in order to mimic how this would have looked in an old newspaper, the article has been unchanged. To see more, head on over to From Zombos’ Closet.]