Roz became a fan of the show back in 2011 and has been following since. She thanked 6ftplus for introducing to so many great bands. And since 6ftplus focuses on the creepy genres of music like psychobilly and horror punk, it’s quite familiar with fearful frights and sinister scares. 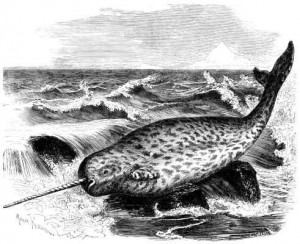 But MS is a different kind of terror. The National MS Society describes MS as “an unpredictable, often disabling disease of the central nervous system that disrupts the flow of information within the brain, and between the brain and body.”

Now, my alter-ego has indirectly witnessed the sadness, the pain and the desperation this condition causes in both MS patients and their families. It’s a treatable condition and the advances in medication are astounding, but we still have a lot to ground to cover.

According to its website, SWIM FOR MS is “a national fundraiser in which volunteers create their own swim challenge while recruiting online donations to support the Multiple Sclerosis Association of America (MSAA).”

Now, swimming is fun but it is TIRING. Just reading that Roz has aimed to swim 35 miles made me exhausted. It’s a great goal that aims to raise money for a good cause. Plus, her Swim Team name is “The Fighting Narwhales.” Whales with unicorn-like teeth that totally skewer their enemies.

The Fighting Narwhales have a group on Fitocracy, but to directly support Roz’s campaign go to here: SUPPORT ROZ’S EFFORTS TO SWIM FOR MS.