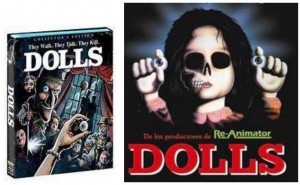 Stuart Gordon’s Dolls is a film that was the staple of any horror section of a video store in the late 80’s and 90’s. And now, 27 years after it’s initial release, the folks over at Scream Factory have given Dolls a blu-ray release with all the bells and whistles.

Charles Band, who would later make films involving dolls such as Blood Dolls and PuppetMaster with his Full Moon Pictures company, executive produced and released Dolls through his Empire Pictures company after the success of Stuart Gordon’s most well known film Re-Animator and his follow up film, The Beyond.

Dolls is a sort of twisted moral fairy tale. When a group of strangers get stranded at the house of a seemingly gentle elderly couple and their house full of toys, the elderly toy maker being another theme that would carry over to the PuppetMaster series, they soon start realizing that not all is what it seems.

Dolls is considered a classic among horror buffs for a reason. Because it IS one of those unique films that isn’t like a hundred other films. Atleast, it wasn’t at the time. And after all these years, the film still holds up. And while some of the films in Stuart Gordon’s filmography are questionable at best, Robot Jox and Space Truckers comes to mind, this is one of his films that is executed to near perfection.

With strong performances by Guy Rolfe as the elderly toymaker and Stephen Lee as the goofy but lovable Ralph, both actors who carry a bulk of the film, and Carrie Lorraine as a child you actually feel for instead just wanting to slap for being annoying, the story comes across as genuinely interesting and engaging. Coupled with great camera work,cinematography and practical special effects, this film is a gem.

The new Blu-ray comes with a Making-Of featurette, cast and crew commentary, a retrospective featurette with interviews of most of the cast as well as Stuart Gordon, trailers and more. The HD transfer is beautiful and the sound quality is excellent.