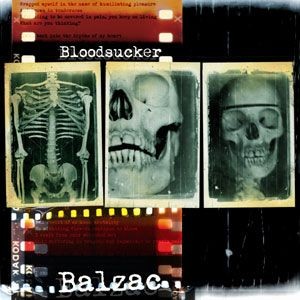 July 7 marked the release of the new Balzac album, Bloodsucker. And since then, I have spent some time with this album.

Unfortunately, Balzac gets disregarded as a Japanese Misfits. And that is mostly based on their look and marketability as such. They have the Misfits connection, but there music is WAY beyond anything Gleen Danzig or Jerry Only have ever dreamed of in their past or present endeavores. Balzac’s musical ideas,abilities,originality and creativity is light years beyond any other band on Earth. And those who have sat down and listened to more that two songs know exactly what I’m talking about. Balzac may have started out as a horrorpunk band, but they have evolved into a musical style that cannot be piegonholed or stereotyped. The lyrical content usually keeps away from campy horror,though not always, in favor of more dark and sinister content and real life horror. Balzac is band know for releasing many versions and remixes of their songs. Even go as far as rerecording a different song with the music from another song and completely changing the music to the first song. They have even created a unique sound that they have dubbed “digital horror”, that can be found in some songs and is strongly present on a few albums. But they also aren’t afraid to strip it down to just 4 guys showing you there immense talent.

And that brings me to Bloodsucker. I can’t say it more simple than, THIS IS A GREAT ALBUM. While 2013’s Blackout , 2010’s Judgment Day and 2009’s Paradox were more experimental,aggresive, noise driven albums, Bloodsucker has more in common with 2008’s Hatred:Destruction=Construction album. In that I can listen to the album straight through and really enjoy it.

That’s not to say there isn’t aggression or noise on Bloodsucker, but Bloodsucker is a more rounded out album. We start ot with a quick 50 seconds creepout of strange sounds with “12-20-68 7-4-69”. It is follwed up by the hardcore with a slight metal tinged “I Suffer”. The other hard hitters on here like “Bloodsucker” and “Atom Age II” showcase just how rowdy these boys can get. The Ace of Spades tinged “Spit It Out” is definitely a toe tapping, fist pumper. While songs like “199666” and a few Japanese titled songs are structured more like older Balzac songs. Perhaps a Beware of Darkness or Came Out of the Grave era Balzac. As is the Halloween anthem “Trick or Treat”.  And the song “Wonderwall”  ,a single that was released last year that made it’s way to this album, harkens back to Balzac’s Deep Blue:Chaos from Darkism days.

All in all, there is a lot of stuff to grab onto in this album and to keep all Balzac fans satisfied. A great album that never gets boring or feels like it’s dragging. And 14 tracks is the perfect amount of songs for an album. Bloodsucker will definetly go down as one of Balzac’s finest achievements and a classic album. 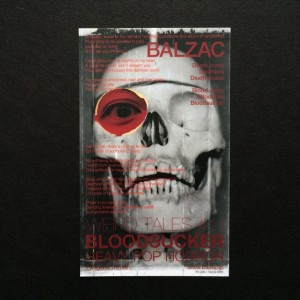