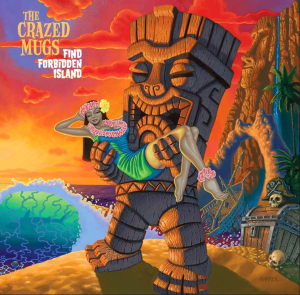 The Crazed Mugs are a Florida-based exotica band which only could have formed in the internet age. Founded in 2004 by the mystery man known only as “pablus,” he met Ken Kanaka through the Tiki Central website. Mr. Kanaka was the man behind the late, great “Tiki Talk” blog, further strengthening the internet aspect of the band. The Crazed Mugs consist of:

Although the band’s first album was the 2005 release My Mug Collection, I thought it would be more appropriate to review their more recent second album Find Forbidden Island. Things kick off with the wonderful combination of ukelele and pandeiro work in “Marooned on the Mainland.” It’s a musical tale of a man who yearns for a warmer climate during the winter and gets what he desires in a most unexpected way. I’m hoping they follow it up someday with a song about how the situation he describes at the end of the song went downhill. Try watching Castaway and you’ll see what I mean. “Hello, I Love You, and Goodbye (The Aloha Song)” is a jaunty little ditty about a few of the multiple meanings of the word “aloha” which makes wonderful use of a ukelele and steel guitar. The reggae-influenced “Bamboo Ben (feat. Jeff Berlin)” has a funky percussive beat and makes excellent use of a horn. This song is one of my favorites and I have listened to it countless times. I’m sure you will do the same as well. “Lake Surfer,” which is sometimes known as “Legend of the Lake Surfer,” is a surf track (naturally) and its opening maniacal laugh and eerie chorus enhance the supernatural nature of the titular character. A soft flute, guitar and percussion make up the musical backbone of “Mystery Girl,” a love song devoted to exactly who its title says. “Smuggler’s Cove” is like a dark Jimmy Buffet song and “Rum Barrel” is simply amazing.

Despite what the name might make you think, “Find Forbidden Island” is very soft and mellow. I love the flute playing in this. “Forbidden Island” is also the name of the painting by Brad “Tiki Shark” Parker which is used as the album’s cover art. “Paradise for Two” is also very laid back which is appropriate given its fantasy of life on an island. The occasional use of a duet in the chorus is a great touch. It also turns out this was written by Ken Kanaka on the night of his wedding! More uke goodness and jazzy beats combine with cymbal beats, steel guitar work and vibes in “Island People.” I really wish they had ditched the lyrics and made this an instrumental instead. “But Kilauea” is much lower key and heavier than the rest of the album due to its more depressing subject matter. “Smuggler’s Cove” looks downright cheery in comparison! But that doesn’t make it any less well made. In the ultra catchy “We Spread Aloha,” the band’s plans for the future and their desire to spread happiness and goodwill. According to its official music video, it’s based on actual conversations they’ve had over the years. The video also contains a lot of great information, including the secret origin of the band’s name.

In the link to their Facebook page I gave earlier, the band describes themselves as ” A Musical Mai Tai of Hawaiian-influenced ukulele rock with touches of exotica, Hapa Haole, and surf.” It’s a perfect description given how they combine various musical styles to create songs about various Tiki subjects rather than focus solely on exotica. Speaking of their Facebook page, they recently announced how they have a new album in the works. If it’s anything like this one, then we are all in for one hell of a musical experience! If this review makes you decide to pick up a copy, might I suggest doing so through the band’s website? Doing so will also get you a free car decal and other benefits.

UPDATE: It turns out Bamboo Ben is a real person! Also, Forbidden Island and Smuggler’s Cove are the names of real Tiki bars and “Rum Barrel” is the name of a cocktail.

Special thanks to the Crazed Mugs for the review copy!