The story of the Turbosonics begins in Pittsburgh, PA. Pittsburgh in 2008 to be specific. That’s when drummer Timmy Klatte placed an ad on Craigslist in order to make his dream of playing in a surf band come true. Jason Truckenbrod answered and became the lead guitarist. He later encouraged his friend Jake Ortego to sign on. Originally billing themselves as “The Surf Zombies,” the change changed their name after discovering there was already a group using the name. As the Turbosonics they played numerous gigs and generously issued several recordings from said gigs as either free or “Name Your Price” downloads on Bandcamp. Keith Caldwell replaced Ortego as the bassist along the way and can be heard playing on the band’s 2012 debut CD. In order to get a full appreciation of their work, I’ll be reviewing albums from both lineups. 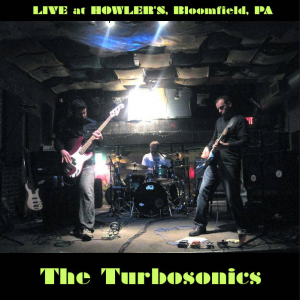 Recorded at the popular local dive bar, the original Turbosonics’ set features covers of many surf classic and one of their originals. Things kick off with their take on the Surfaris’ fast and bouncy “Point Panic.” You know you’re in for a good time when the opening track rules this much. I’ll be getting to “Dragstrip” later in this article. Let’s just say this version is great and has even higher energy than the original! Next comes an awesomely heavy take on two Dick Dale favorites, “Miserlou/Maleguena.” “Scalped” keeps the Dick Dale party going with a truly fantastic performance. Next comes a slow (but in a good way) surf cover of a decidedly non-surf track from The Reverend Horton Heat, “Marijuana.” After that guitar workout, the Turbosonics’ take on Link Wray’s “Rumble” closes things out. It’s fairly soft, but still retains all its power. It’s the perfect way to close to the show (and to the album). Just one listen will confirm these versions all stand side by side with the originals in terms of quality. It’s a free download, so you have no excuse for not checking this out for yourself. 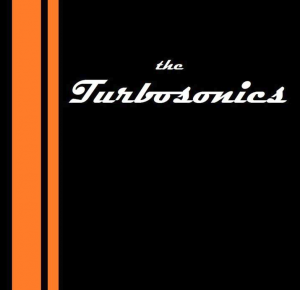 Their self-titled “official” debut features Keith Caldwell on bass and I’m happy to report he’s able to seamlessly fit into the band while still bringing his own style to the table. Ortego still has a hand in this album, but that will have to wait until later. Slow reverb opens both the album and “Clambake,” whose cymbal buildup leads to medium paced surf goodness. This track also features an awesome melding of drums and guitars. “Black Flamenco” is faster and somewhat lighter than previous track while “Lights Out” is much heavier than the other tracks. It’s got one hell of a beat and I dare you not to have this stuck in your head for days after listening. Clacking drumsticks open “Man’s Woman” and are soon followed by speedy cymbals and intriguing guitars. Interestingly enough, this was written with country singer Slim Forsythe! “In The Shadows” is soft and smooth…at first. Then things really pick up for a catchy beat. I love the percussion in this. “Dragstrip” has an effective scratchy opening and reeving engine, followed by appropriately fast-paced surf rock. It also features the most varied guitar work on album, although the fast and peppy “Zombie-A-Go-Go” does give it a run for its money. Both tracks were written with none other than Jake Ortego. Things come to a close with “Hattori Hanzo.” It’s a musical tribute to a famous Japanese historical figure, although many reading this might remember the name from the Kill Bill films. Its low and serious opening leads to a feel of power and determination.

Don’t let the small number of tracks fool you, as many of said tracks on both albums are well over five minutes in length. No matter which incarnation of the band you choose, the Turbosonics will definitely provide an excellent listening experience. And with their newest album coming out in the near future, you won’t have to wait too long to get your next fix. Hopefully the upcoming release of Tres Gatos Suave will lead to more spooky stuff in the future. I’d say “more great music” as well, but I’m pretty sure the band has already got that covered.