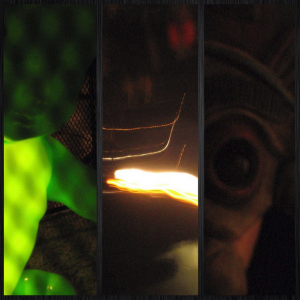 Jeannie Novak is a woman of many talents. She writes books, develops video games and is a photographer in addition to her talents as a composer and performer. In fact, she’s been playing since age five and composing since she was twelve years old! She’s also the first woman to compose several complete albums of spooky music for haunting. Said albums are available in three basic styles: synth, ambient and piano. All releases under the “Horrorshow” banner can be purchased separately in each style or as a complete collection. They can also be obtained in the subject of today’s review. That’s right, Horrorshow: The Complete Collection combines all versions of Horrorshow: Mad House, Horrorshow: Big Top and Horrorshow: Ghost Town into one handy album.

Things start off with the Horrorshow: Mad House albums. “Descent (synth)” is made up of somewhat nervous and uneasy light tones, which get more frantic as time goes on. There’s a definite feel of descending and I can easily see this playing while visitors have to go down a dark and lengthy stairway. “Requiem (synth)” is appropriately mournful and slow (with a touch of moaning tones). Since it plays out like a funeral march, why not use it in your haunted attraction’s funeral parlor? “Ghostly confusion with a dash of whimsy” is my best description of the lengthy “Nightmare (synth)” and it must be heard to be truly appreciated. “Lament (synth)” creates a sense of sadness with its beautiful slow tones while the wordless female vocals and wandering synth work of “Visitation (synth)” create the feel of a visitor from beyond. Both tracks would work well in a séance chamber. The piano work of “Phantom (synth)” reminds me of an elegant harp, but things get much more frantic later on. “Fugue (synth)” is especially creepy and ethereal while the short “Solitary (synth)” reminds me of a music box in a haunted nursery. Before moving on to the piano and ambient versions, I want to stress how not all versions of each track are the same length. Piano music might seem like an unusual choice for a haunt, but the plinking tones of “Descent (piano)” are still quite spooky. Similarly, the piano work in “Requiem (piano)” adds to the funeral feel. “Nightmare (piano)” would be perfect in a room featuring a piano which plays by itself. The remaining tracks seem more beautiful than scary to me, but still have their uses in haunts. Imagine your guests entering a room set up to look like a gruesome restaurant filled with monsters devouring human flesh. Having calm piano music like one would expect in a normal dining establishment would be a great contrast. “Descent (ambient)” really cranks of the sense of unbalance and would work wonders when paired with a room where people have to cross a bridge over a seemingly bottomless pit. Ghostly wailing wind forms the bulk of “Requiem (ambient)” and I found “Nightmare (ambient)” to be much more chilling than the synth version. Similarly, “Lament (ambient)” is now less mournful and more chilling. The otherworldly “Visitation (ambient)” could work with a vortex tunnel and the mournful unisex chorus of “Phantom (ambient)” makes it perfect for any spooky scene. But if I have to pick something, why not a hallway lined with spooky paintings? A drop panel is also a nice effect to use with that kind of setup. The dark buildup of “Fugue (ambient)” goes well with the menacing beats of “Solitary (ambient).”

Horrorshow: Big Top starts off with the (mostly) cheery calliope-sounding music of “Fanfare (synth).” “Clowncar (synth)” is peppy while “Grinder (synth)” is comparatively subdued and slightly mysterious. “Menagerie (synth)” offers a softer and slower kind of peppy and “Coulrophobia (synth)” is surprisingly elegant. Want something loud and happy? “Odditorium (synth)” is what you need. “Labyrinth (synth)” has jolly, almost sneaky tones and “Carousel (synth)” musically transports the listener to a merry-go-round. If you decide to go with the theme suggested by the first album, this fits in with any clown patients in your asylum. “Fanfare (piano)” is plodding, yet still happy. It’s like something from a silent comedy. That description also applies for the rest of the piano tracks. Both the synth and piano tracks are neutral enough to work in either scary or normal circus scenarios, while the decidedly scary ambient tracks have almost no musical connection to the circus. The distant ringing effect of “Fanfare (ambient)” is rather unnerving, as is the intriguing combination of creepy and peppy in “Clowncar (ambient).” The evil clown laughter is a perfect touch. “Grinder (ambient)” is eerie enough to work in a scene involving ghosts, “Menagerie (ambient)” is very disturbing and “Coulrophobia (ambient)” is otherworldly and somewhat spacey. The eerie and soft “Odditorium (ambient)” would be perfect for a graveyard and countless other spooky scenes. “Labyrinth (ambient)” offers soft, pounding beats and there is nothing “merry” about “Carousel (ambient).”

Horrorshow: Ghost Town begins the end of our journey with the spooky western piano work of “Badlands (synth).” The great thing about haunted old west towns is how most haunt scares can be used in them with little or no modifications. Giant spiders and rats feasting on body parts fit in, as do werewolves and ghosts. Adding a cowboy hat to a pneumatic pop-up scare is easy. A little creativity can turn scares from a car crash into a crashed stagecoach and a cannibal butcher works just as long as you ditch the chainsaw. If your weird west haunt has a skeleton playing a banjo, then “Rotgut (synth)” is the perfect twangy tune! “Goner (synth)” is bouncy western music with just a touch of creepy synth tones and “Venom (synth)” is a wobbly western jaunt. “Tumbleweed (synth)” offers a light and happy tone which is very different from the somewhat darker “Boneyard (synth).” “Headless (synth)” is soft and sneaky while “Deadend (synth)” really picks things up in terms of volume. It’s wonderfully slow and spooky and I simply love the ending. The piano tracks are fairly neutral and sound like something from a silent movie (just like the circus piano tracks). That said, they do fit the feel of a saloon and could work in a haunted attraction aimed at the very young. The only exception is the darkness that is “Deadend (piano).” “Badlands (ambient)” is soft and spooky while “Rotgut (ambient)” is made up of winds and distant noises and “Goner (ambient)” is incredibly unearthly. Why not use all three in a graveyard? Best of all, the old west theme lets you use inexpensive grave markers made from sticks and twine. A prop vulture and cow skull are also great touches. “Venom” has a heavy and appropriately slithering feel. Play it in an area with large amounts of fake snakeskin lying around and scare people using a giant prop rattlesnake head which pops out at them. “Tumbleweed (ambient)” offers winds and weirdness which can work for a haunted mine shaft. I love the creeping feel of “Boneyard (ambient).” Why not use it with a scene involving scorpions or spiders? Said creeping also reminds me of rattling bones, so this can also be paired with a skeleton hanging from the gallows. The eerie tones of “Headless (ambient)” cast a haunting, wandering spell. The winds and creaking effects in “Deadend (ambient)” make it a must, as does the distant harmonica. It’s the perfect close to the album.

Horrorshow: The Complete Collection offers unparalleled variety for haunter and Halloween enthusiast alike. Most tracks are suitable for looping and you can cycle through versions of each individual album over several years without things seeming repetitive. It also helps how many tracks can be used in themes other than what the albums’ titles suggest. In addition to how buying this version is far less costly than buying all the albums individually, purchasing it also entitles you to a special bonus: detuned versions of all the Horrorshow: Ghost Town piano tracks! Did I mention how buying any of her horror albums (and only her horror albums) lets you use her work in your haunted attraction royalty free? You can visit her special website to get all the details. I spoke with Jeannie about the idea of nonprofit organizations using the neutral synth and ambient circus music in fun houses royalty free in order to raise donations and she approved. Not only that, she also suggested they could do the same with tracks from Horrorshow: Ghost Town for wild west towns! This is wonderful news considering how food banks have trouble getting donations in the summer. Organizations can cheaply and easily reuse props from circus and western haunt scenes in such events, so budget issues should not be a problem at all. I have also learned the “Horrorshow” line of releases will eventually lead to several short stories and maybe even a movie. Here’s hoping we see those (and other spooky albums) in the near future.

Special thanks to Jeannie Novak for the review copy!

Bad Behavior has blocked 895 access attempts in the last 7 days.