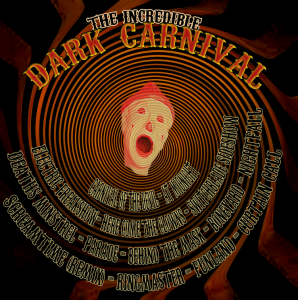 If you’re like me, the idea of a haunted circus leaves you cold. I’ve had to review albums based on the concept so many times that I am completely out of ideas. But at the same time I can’t blame any artist for choosing it as an album theme. It would be foolish for any haunted ambiance artist to pass up on guaranteed sales by composing something for this wildly popular theme. But my hesitation was cast aside upon hearing how Sam Haynes was going to tackle the concept. Spooky carnival tunes with an 80’s horror dance twist? Count me in!

In “Carnival of the devil,” a crackling and creepy sample from One Step Beyond about strange happenings at a carnival really sets the mood. Soft electro beats and synth stabs create a feeling of danger and suspense. The wordless female vocals add an extra layer of terror to the mix. There are also some lighter touches which work nicely with the carnival theme, one segment even reminds me of a carousel. Using tracks with dialogue samples is tricky, but the carnival theme does allow one to play this through a loudspeaker and pass it off as an announcer talking. The opening build of the lengthy “At Midnight” reminds me of violins. Its general eerie tone eventually transforms into an 80’s horror movie feel. Militaristic drums make their first of many appearances in this album, as do dance segments. This can be used in the waiting area or just about any haunt scene you can think of. The same can be said for “Electric Freakshow.” Its opening may have freaky merry-go-round feel to it, but the pounding synth beats kick up the scare factor. I’m also quite fond of the piano solo and ethereal female vocals. If you want something a little different for your haunted nursery, this is the track for you! “Here come the clowns” has a sample about clowns take us to an off-kilter circus march. The wordless vocals and synth work add to the overall effect. “Switchblade sideshow” busts out another sample, along with a frantic and rockin’ carousel beat. The catchy electro touches give this a dance feel as well. I envision it playing while your guests walk down a hallway designed to look like a sideshow. The attractions seem like static displays at first, until they all spring to life and chase the patrons into the next area. A werewolf costume can be used for “Jo-Jo The Dog Faced Boy” and a gorilla costume is always handy. “Death’s Minstrel” is spooky and soft with plenty of great piano work and an imposing drum beat. The term “eerie” doesn’t even begin to describe “Parade” thanks to its soft lurking tone and wordless female vocals. Somewhat mournful string work comes in later, as does a relatively restrained dance beat and chimes.

“Behind the mask” also starts with a soft, lurking feel and gradually builds up like a Jack-in-the-box. I think you can guess how to take advantage of such a track for your haunt. “Boneyard” offers a soft (but heavy) horror ambiance with a spooky sample. The use of a moody buildup rather than being in your face is very appreciated. “Nightfall” is an extremely creepy and very 80’s which is good for any spooky scene. “Screamtime (remix)” is a new take on Sam’s contribution to the free Fresh from the Morgue Vol: 2 album from Graveyard Calling Horror Records. This version is somewhat faster paced and could make for an unnerving experience when paired with a dark hallway or dark maze. Musical moans form the beat of “Ringmaster” and are soon joined by lighter touches and a circus march you can dance to. Militaristic drums, which often appear in this album, show up as well. “Funland” has a very soft and slow opening build, but drums kick things up. Some parts could be passed off as rattling bones, so you can use with a scene involving a skeleton band. “Curtain Call” combines a sample with quiet piano music to conjure up an air of sadness. If you turn down the volume low enough, you can couple it with your graveyard’s “Angel of Grief” tombstone without people hearing the sample. Having faint music seem to suddenly appear when they get close to that particular grave will also enhance the atmosphere. “Supernatural” is the word which comes to mind when you hear “Lost Souls.” There’s a heavy feeling of dread in the opening, but it gets somewhat lighter as the dance music enters. The appearance of chimes also allows for use in scenes involving music box. “Behind the mask (Eefsbeatz remix)” injects a little extra life into the mix while “Here come the clowns (Guyschur remix)” has a slower and scarier opening. It also includes some freaky distortion effects and amazing beats.

Sam Haynes does it again with this collection of music whose tracks can work in a haunted carnival or general haunt theme alike. Many tracks are fairly lengthy and all can be looped without issue in haunted attractions or for your front door on Halloween. There’s also plenty of great music for general listening, parties or playing in the waiting area of your attraction. Even a haunted circus theme cynic like myself can’t help but love it. My only complaint is how he doesn’t include any alternate versions of tracks with the samples removed. Don’t get me wrong, I love hearing what sort of material Sam digs up each year. I just feel having versions without dialogue allows for easier use in haunted attractions.

Bad Behavior has blocked 675 access attempts in the last 7 days.