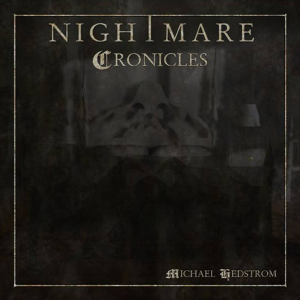 I think it’s safe to say I have been waiting for Nightmare Chronicles almost as long as Michael Hedstrom has. It was in the works for years and premise of was just too good to miss out on. An album which explores several different horror concepts while uniting them under the theme of a nightmare? Brilliant! Who hasn’t had a dream which changed and jumped around at some point in their lives?

The unnerving noises which open “Enter Dreamland” remind me of sirens and are a constant over the dark string work. The combination of percussion and loudly chanting wordless unisex vocals near the end are also a great touch. “Lost Wandering” also uses a “siren,” albeit one which goes in and out of the track. The dreamlike (yet moody) guitar work has a somewhat medieval feel and the crunching noises leave you wondering whether they are leaves or bones. Organ work, soft vocals and other spooky touches are layered in as well and it all comes to a close with tolling bells. I suggest using this in either a haunted forest or castle setting. “Ballerina Vallassa” alternates between a relaxing and dangerous tone. Dramatic strings enhance the slow, steady piano work and flute while the chimes add dreamy touches. Even at its most beautiful, there is always a sense of darkness. If your haunted house has an area set up to look like a woman’s room, use this track with a ballerina music box which starts on its own. “Creepers” features wailing wind and bursts of piano, along with a constant background sensation of things creeping and crawling around. The occasional percussion and strange cries nicely contrast with the uneasy woodwinds. If you have a bug room or scene involving a giant spider, this is an absolute must. “Mother” has a loud and effective opening sure to remind you of a horror movie. You’ll know what I mean when you hear it. Soft screeching bats (or whispers), touches of bells and gong bursts further aid the mood. Even the lighter moments brought on by the chimes and strings are eerie. The same can be said for the wordless female vocals. This could work in a vampire’s lair or even a haunted nursery. That last room idea is also a good match for “Living Dolls,” whose plinking tones and bursts of loud music will give any listener the sense of music boxes and running cartoon characters. It alternates between “peppy” and “danger,” while marching drums and parts which remind me of a calliope also mean circus potential. Dramatic strings and low horns bring the horror by the end of track, along with bursts of vocals.

The eerie opening of “Stranded” leads to soft chirping and sci-fi musical tones. There’s plenty of otherworldly “high tech” sound effects which are a great match for any laboratory or alien room. “Frozen” offers spooky strings and light touches of piano. Are those gusts of wind? You’d better believe it! The gongs and “siren” are nice touches as well. The industrial-style opening and catchy beat of “Nano” make its dance potential very clear. There’s moody synths, creepy effects, dramatic moments and more sci-fi musical touches. It’s a must for parties, waiting areas or haunted club scenes. It could maybe even fit in a lab due to its storm, bubbling and crackling electricity effects. “The Pit” is the longest track and its dark, moody opening makes wonderful use of strings and wordless vocals. In other words it’s extremely atmospheric. The horror musical stingers and light piano contrast nicely. The spooky fluting goes surprisingly well with the wordless male vocals and dripping effects. It works with any haunted cave, dungeon, sewer, bottomless pit and various other spooky scenes. There is so much to love about “The House on the Hill.” The wind and mournful string work, the spooky organ music and the constant storm effects are fantastic. Said effects are as varied as the organ, which makes things seem more realistic. Any haunted room or phantom organist scene would benefit from your playing this. “Recital” is filled with low, slow piano work. But what would you expect given its name? The ethereal tones and woodwinds make it especially ghostly and offer great potential for a séance room. The clanking metal of “Solitary” gives it an industrial feel. There are other eerie touches as well, such as the warbling music which sounds like an old phonograph. What chain maze, boiler room or haunted storage room wouldn’t need this? Things close out with the dance track “Nefertiti.” Like the name implies, it has an “Egyptian” vibe to it and its catchy electro beat gives Sam Haynes a run for his money. If you run a “Haunted House of Rock,” be sure to make this the theme to your mummy scene!

Michael Hedstrom has really outdone himself with Nightmare Chronicles. Its variety of themes give him a chance to spread his wings and show off his talents in other types of music. The lengths of the tracks make looping a breeze and you have plenty of to pick and choose from. On top of that, you also get some tracks for your next Halloween party playlist! So head on over to his Bandcamp page and pick up your copy. You won’t ever regret it. while you’re there, you can also learn about some details I missed back when I first reviewed his work.

Bad Behavior has blocked 1602 access attempts in the last 7 days.