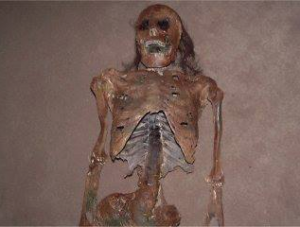 “Corpsing” (sometimes known as “corpsifying”) refers to a technique where a prop skeleton is treated so that it looks like a decayed corpse. The most popular type of skeleton used for this is a human anatomical skeleton. Many tutorials refer to this kind of skeleton as a “Bucky,” due to the website “Bucky’s Boneyard” (now known as the “Skeleton Store”) being the most popular source of anatomical skeletons among the Halloween community. Sometimes those cheap plastic “blow mold” skeletons which show up in pharmacies each Halloween are used and as a result, you will occasionally see a reference to a “Blucky” every now and again. Sometimes this technique is even used on foam pumpkins, but for the purposes of this article the term “corpsing” will strictly be applied making fake human corpses. This also includes making a prop corpse from scratch.

The source of the above image, along with many of the previously mentioned facts, is from Fright Fx’s handy tutorial on the matter. The use of liquid latex and cotton shown there is the traditional method, but don’t think for a second that all corpses made this way will look alike. Similar tutorials, such as this one from Twisted Visions, prove otherwise. This method can also be use to corpse prop skulls and “ground breakers.”

Although popular, this is one drawback to this method: it takes ages for the latex to dry out! Thankfully, people soon discovered how using plastic tarps, paints and a heat gun could drastically reduce the completion time. My Ghoul Friday’s take on this method took a few hours to complete, but that was likely due to certain variation on technique and the level of detailing. Others have reportedly completed their corpses anywhere between thirty minutes to about an hour. Your mileage will vary. No matter how long it takes, you should also look into these bonus corpsing suggestions from Dr. TerrorEyes. Elements from both corpsing techniques also reminded me of the “Charred Corpse” prop tutorial by I Make Projects.

Speaking of My Ghoul Friday, her “Mr. Flopsy” and “Bubblehead” projects could be used when making a corpse without using a skeleton as a base. Just as the case is with corpsing, just because you use a foam wig head as the basis for the head of your corpse doesn’t mean all heads made this way will look the same. The Creepy House Next Door has proven that. If you only plan on using your corpse indoors, then you might want to consider using “Snot-Rag Mache.” As you can see, it you can use it to make a head using a plastic shopping bag stuffed with newspapers and using cotton balls soaked in glue make for amazing corpse eyeballs. Haunters Hangout discovered how liquid latex and old disposable pens (along with a few other items) can be used to create corpse hands. Searching further also turned up two more handy tutorials: “Corpse from Scratch” and “Creepy Shelly.” So no matter what method you decide to use, I’m sure your corpse prop will look great!

Special thanks to FrightFX for use of the image!