Music to Haunt By: When Time Ends 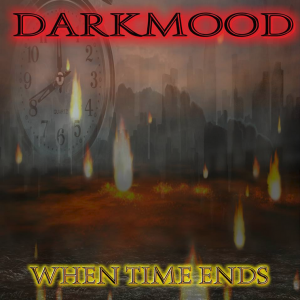 The man behind Darkmood and Notic Reign Records, Steve D. Montgomery, has always wanted to compose music for films. He didn’t want to abandon Darkmood and at the same time wanted to create a demo recording with a more cinematic style of music. Although music from his previous albums could be used in a movie and nobody would complain, he wanted something grand and sweeping. This lead to the creation of When Time Ends. Rather than use the traditional supernatural sources of horror, he looked to a dark future and created the soundtrack for a nonexistent film.

“Blood Moon” will remind you of the opening to a modern day movie. You’ll know what I mean when you hear it. The pounding beats are vaguely tribal at times and I was most intrigued by the use of fluting touches, distortion effects and power tool noises as well. Occasionally there are some wet noises which remind me of eating and allow for use with zombie scenes. Or, given the album’s post apocalypse theme, mutated cannibals. You can have visitors pass through an area where a corpse is being roasted over fake flames, surrounded by cannibals feasting on prop body parts. Most of said cannibals are just inanimate dummies, but at least one of them should be someone in costume waiting to spring to life at the right moment. Or they can sneak up from behind while people are distracted by the gruesome sight in front of them. It’s your choice. The intense and brooding “After The Fire” uses plenty of wordless female vocals, but they’re not the kind you usually hear in spooky ambient albums. I love the great use of percussion effects and how the heavy tones flow in and out. The pounding static in the middle brings in lots of other interesting musical touches as well. The opening of “City Black” reminds me of something being transmitted or broadcast. This is further enhanced by the static effects that interrupt an amazingly catchy beat. The rockin’ guitars take over for a segment which should please fans of Blade Runner. Eerie string work, the sound of a door being opened, wind chimes and vaguely wailing sounds also help add to the tension. Wordless male vocals usher in “The New Dawn.” This has a mystic and tribal in feel thanks to its exotic string work and percussion. The static backing and female vocal solos are nice touches. It’s somewhat relaxing, but not completely peaceful. “Dystopian Transmission” begins with some wind chimes and low, heavy backing tones. Drums and high tech sound effects soon arrive on the scene. Wordless female vocals and chirping tones soon following, along with a static break which is soon intruded upon by heavy doom. I can definitely see this working in an alien room. The speedy opening of “Survivors” reminds me of a video game. Male chant-groans appear and disappear throughout track and there’s a surprise appearance by piano work among the drums. Wordless vocals also put in an appearance.

Similar vocals are also heard in “Road To Peril,” along with synth tones and dark, pounding music. It’s very creepy and effective. Even the lighter touches have an edge to them. This could work in a variety of haunt scenes, but let’s stick with the dark future theme and use this with a toxic waste dump! In addition to the standard toxic barrels, some could have pop-up monsters and you might be able to adapt the beloved falling crates scare to use barrels instead. “Wake Up” starts with high pitched, vaguely siren-like tones. There’s a smattering of sci-fi sounds before the pounding beat and distorted static pulses join in. Half-audible comments are occasionally heard, along with soft wordless vocals and orchestral touches. This disturbing little number would presumably score a nightmare scene if the film actually existed. Especially since it ends with a ghostly woman talking about dreams and then an evil voice says the track’s title. The use of static and other such effects in “Lost Souls” creates the sense of something evil breathing in background. There are lots of other unnerving effects and low, heavy backing tones. This is further proof that lighter musical touches don’t always hurt a scary track. Even the somewhat “Middle Eastern” dance break quickly gets scary thanks to the use of wordless vocals. “Ghostly Chatter” is not what you might expect from a spooky ambient album. While there are ghostly whispers, they frequently overlap amid the sounds of crackling static and transmission snippets. Once you factor in the interesting percussion and exotic musical touches layered over it, you have one very unique track. Try playing this in a room with a prop television in it. Said prop has a white spandex screen with static projected onto it. This creates the illusion of faces and hands forming in the static when the person hiding behind the TV presses against the false screen. “Midnight” offers pounding tones and a creepy backing which should please many horror fans. What may be distant screaming can be heard at times and I love both the synth and orchestral work. “Rise From Ashes” is low, pulsing darkness in audio form. The beat and backing touches (such as female vocal solos) can and will give listeners the shivers. But there is a tiny bit of hope in this otherwise dark track, presumably to foreshadow the final track. That track is appropriately called “Hope” and while the introduction is a little creepy, everything else lives up to its name. The synth work is louder and more upbeat than it is in the other tracks. I recommend using it at the start of your haunt if you have a part where everything seems normal…at first. This will let you get away with some of the minor dark touches. Said touches make sense in the context of a track about a new start in a dystopian future. There may be the potential for a new world, but they still have to do a lot of work to do on the old one.

When Time Ends proves Steve Montgomery has what it takes to score a motion picture. It can be enjoyed on its own all year long despite its dark themes and explores virtually uncharted territory in the world of spooky atmosphere music. I say “virtually uncharted” because Gore Galore’s Sounds of Gore line does feature a release called Dark Apocalypse. But it’s a massive soundscape rather than a collection of music, so the subject of this review truly stands alone. It also offers haunters a diverse selection of music to pick from. Looping the tracks individually is recommended over looping the entire album. Although he plans on doing more albums with a cinematic feel, this does not mean he’s abandoned his original style. He’s currently at work on some new material and is planning the release of The Haunting in the very near future.