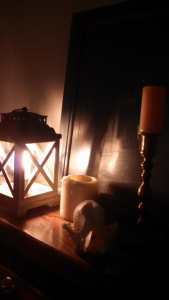 Those of you who read last year’s collection of spooky stories might remember a website called Spookinite Valley. Enough of you followed my link there to attract the attention of the site’s creator, Benjamin A. Fouché. Mr. Fouché was very flattered to receive the attention and got in touch with me to promote his (then) newest tale, “The Winston Manor Mortuary.” But when I mentioned it on Facebook, I referred to it as a virtual haunted house. It turns out this was not correct.

Although the story does span several web pages and features images, Ben was kind enough to tell me why he felt it wasn’t really a virtual haunted house. He explained how the illustrations and music by Midnight Syndicate are only there to enhance the overall mood. The story is supposed to be the main focus, whereas a virtual haunted house is supposed to be taken as a whole. But he understood my confusion, seeing as how one of his influences was the classic 1998 virtual haunt of Frightbytes. He also provided some other examples of what he felt were true virtual haunted houses, such as Virginia Varela’s Interactive Virtual Haunted House, the family friendly Sue’s Haunted Mansion and the realistic TrespauzeManor. He also pointed out Caverns of Blood, which openly refers to their virtual haunt as a game. I think these links more than prove his point. Not many of them could be enjoyed if the graphics and sound files went missing, unlike the stories at Spookinite. But given the relationships each of these share, what name could be used to describe them all? After much time and discussion, we finally arrived at calling them “online haunted experiences.” Here’s my own little list of websites which fit into this category:

Yes, that first game is the one which infamously referenced the disappearance of a character from Garfield. No, I’m not going to explain any further about the matter. Instead I wanted to look at another close cousin of the virtual haunted house: haunted attraction walkthrough tours!

Although the rise of streaming video and expired domains have mostly killed off this method of showing off a haunted house, you can still find some if you look around hard enough. I have to wonder if virtual reality devices like the Oculus Rift will similarly effect video tours of haunted attractions in the future. They might even go into direct competition to haunted attractions themselves! My list is far from complete and I encourage you to look for more tours, virtual haunted houses, etc. I also encourage you to use caution. Not because of the terrors lurking within online haunted experiences, but due to how many feature plugins and ads which might not be as secure as they were when they were first published.

UPDATE: Although you can still read “The Winston Manor Mortuary,” it’s no longer set up like an illustrated trip through a haunted location.

Special thanks to Benjamin A. Fouché for use of the image!