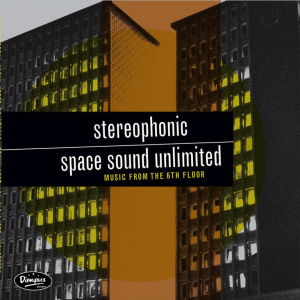 It’s been ages since I last reviewed something by Stereophonic Space Sound Unlimited and the group seems as mysterious as ever. In fact, I hadn’t heard anything from them in so long that I had assumed they had quietly disbanded! So imagine my pleasant surprise when I found out about the release of Music From The 6th Floor. Do they still have wait it takes after taking so long to put out a new release? Let’s find out!

Chimes and a 70’s style funk groove take us down “35 Falcon Street.” As was the case when I first heard “Sitar Jerk” upon playing The Spooky Sound Sessions for the first time, hearing it made me realize that I was going to love this album. The drums blend in well and I’m wild about the group’s very different take on guitar reverb in music. “808.7” has both a science fiction and video game feel to its opening. The use of feedback adds to said feel, along with the catchy drum machine beat and interesting little bursts of reverb. A phrase like “energetic relaxation” might seem contradictory to some, but I think it describes this track perfectly. In “Green Bluebird Fly,” the overall feel is closer to traditional exotica than the other tracks. This is thanks to its mellow tone, percussion and tambourine usage. The guitars do pick up the pace a bit, but it doesn’t have same feel as the last track. Piano work makes a surprise (but welcome) appearance as well. “Blues from Pluto” is bouncy neo-exotica featuring impressive guitar work and bubbling notes. “Night Boat to Antalya” seems to be a reference to a populous city in Turkey. Perhaps that’s why bells and bongos are used to create a “Middle Eastern” feel? This track conjures up a sense excitement and intrigue, which is aided by “spy-fi surf” feel of the guitars. “Take Me to Another World” lives up to its name with a peppy, sci-fi synth beat. There’s plenty of chimes sprinkled throughout, along with maracas and soft touches of bongos. I also love tune out effect at the end.

“The Teacher and the Preist” (which is not a typo on my part) features plenty o’ percussion and piano. Its use of comparatively heavy reverb and less relaxed feel must be heard to be appreciated. The title track, “Music from the 6th Floor,” is a reference to the album being recorded in a high-rise building. But let’s get back to the song itself. Its brief heavy and ominous musical build yields to varied drum machine beats. Bongos shine here, while the piano work, touches of reverb and guitars add to the feel. Fans of synth and clapping hands should be sure to seek this out! Those elements can also be found in “Aimez-Vouz Henri?” The name is inspired by the French term “Aimez-Vous” and the title roughly translates as “Do you like to, Henry?” The track itself is an interesting fusion of 80’s synthpop and neo-exotica with a side of surf. In other words, you can expect speedy synth beats, reverb riffs and bongos. “Night of the Jaguar” takes us back to the traditional exotica feel thanks to its steel guitars, maracas and bongos. But there’s still plenty of SSSU touches to keep this in realm of neo-exotica, like the kooky organ work. Heavy and somewhat ominous piano leads us into “Minigolf and Butter Chicken,” but the bongos and other percussion lighten the mood considerably. The organ solos are simply incredible. In contrast, “Spacechild” softer, slower and much more mellow thanks to its bongos and maracas layered over synth work. “Psisurf” combines guitars, bongos, etc. over steady synth tones. I love its touches of bells and dueling guitars, one surf and the other which can only be described as being pure Stereophonic Space Sound Unlimited. Things close out with “Don’t Worry I’m Fine.” It has great reverb and a most relaxing percussive beat. It would be a fantastic closing track even if it didn’t have such a variety of instruments on display.

Music From The 6th Floor is proof positive Stereophonic Space Sound Unlimited hasn’t lost a step. So, yeah, this was well worth the wait. In addition to being available on factory-pressed CD and as a digital download, there’s also a vinyl version. I have the CD version, partly because getting my hands on a record player would inevitably result in my turning it into the guts of a motorized Halloween prop. I also like how the music being on a shiny metallic disc compliments the band’s futuristic sound. This is the first time I’ve encountered a Dionysus release in a cardboard digipack rather than a jewel case. No matter what sort of packaging (or formats) their next album will be available in, here’s hoping we don’t have to wait very long for it.