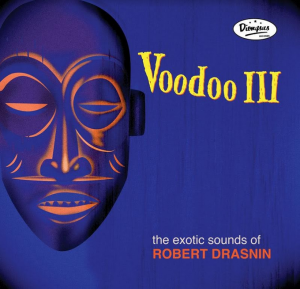 Exotica legend Robert Drasnin had been hard at work right up until his passing in 2015. 2011 saw him working with the Waitiki 7, both on covering his past hits and playing his new composition “In A Dorian Mode.” He was also hard at work on his sequel to Voodoo II right up until his death. The only problem was it was left in an incomplete state! Dionysus Records sprang into action to find someone to finish his work so fans could have one last Drasnin album to enjoy. And who better to finish it than the man who not only pulled Drasnin out of retirement, but also collaborated with him on many occasions? That’s right, the task fell to Skip Heller (who is a highly accomplished exotica musician in his own right). How did he do? Let’s find out!

The opening track, “Appogiatura Exotica,” gets its name from a type of “musical ornament.” It also uses a laid back percussive beat, guiros and beautiful vibraphone work to create an incredibly soothing listening experience. I loved the way it closed out, even though I was sad to have the track come to an end. Chimes bookend “Anna May Wong,” whose use of percussion and vibes is nicely complimented by the occasional appearance of wordless female vocals. Thankfully these aren’t the kind of wordless female vocals that often show up here during the average “Music to Haunt By” review. But it is the flute that is the true star of this tribute to a Hollywood legend. “Song of the Sulu Sea” is a musical journey to the Philippines. A peaceful horn, saxophone, maracas and triangle join the vibes to create an incredibly pleasing musical experience. In fact, I get so caught up in it that I keep forgetting to take notes about it! “Hulabalu” is much more lively than the previous tracks. This peppy little tune brings us guiros a go-go with some flute work and a sax solo for good measure. “Voyage to Vanuatu” is mysterious and a little darker than the other tracks (despite using most of the same instruments as said tracks). This tribute to a real life Pacific island nation also stands out thanks to its inclusion of castanets and a piano. The cooing vocals further draw the listener in. Cymbals crash and notes musically tiptoe as “Hola Samba” opens. Its lively Latin beat is joined by actual lyrics and will definitely shake you awake after so many relaxing tracks. If you’re wondering about the instruments used in it, a saxophone is combined with lots of percussion (including vibes).

Vaguely mystical chimes start off “Jobimiana.” But its opening militaristic drum beats transition to the mellow sax work which weaves throughout the track. Flute work, vibes and maracas also join in on the fun until the drums play us out. “Tiki Idyll” takes things back down a notch. It’s not completely mellow but it’s pretty close. In addition to the occasional wordless vocals and maracas, the listener also gets to experience saxophone work, guiros, tambourine and vibes before the impressive chime-heavy closing. “Farewell to Tuvalu” opens with soft guiros and bongos. The tambourine makes a few scattered appearances before finally settling into place. This is followed by vocals, vibes and a most interesting effect at the end. Oh, and in case you were wondering, the title refers to a Polynesian island nation. The peppy “La Mer Azure” brings us to the Bahamas with a percussion explosion aided by some saxophone work. “Aloha” shows Drasnin and Heller really did save the best for last. Most of the instruments used for this album put in an appearance and even some other aspects of past tracks show up as well. The use of a Latin melody is one such example. As the lyrics tell us of the different meanings of “aloha,” one comes to the bittersweet realization that in this case, it means saying goodbye to Robert Drasnin forever. Thank goodness we can always hit “Repeat” and enjoy his other albums as well!

Skip Heller did Robert Drasnin proud with this release. Not only does Voodoo III stand side by side with its predecessors, but his liner notes about the restoration process are highly informative. Originally issued as a limited edition CD-R release in 2015, Voodoo III is now available on factory-pressed CD, vinyl and as a digital download. According to that link, the vinyl release was “cut on a tube system with a vintage Scully lathe and Westrex 2B cutting head.” I know next to nothing about vinyl, so I’m assuming that’s a good thing. If you’re wondering who’s behind the striking album image, Claudette “Miss Fluff” Barjoud handled the cover art duties this time around. What else can I possibly say? The legacy of Robert Drasnin lives on and this album is a must for hardcore fans and curious neophytes alike!

Bad Behavior has blocked 916 access attempts in the last 7 days.