High recommendation. There is no other band that sounds like Deadbolt. Deadbolt is the surf music played by the undertow for all the bodies caught in it as they drown.They’re on the beach, watching the struggling body go down for the third time. They’re sharing some beers and laughing low.

Coining the term ‘voodoobilly’ to describe their music, Deadbolt has a signature sound that is unmistakably their own. Harley Davidson and R.A Maclean have a low flying drone in their singing, which echoes perfectly to the sound of their guitars.

On both ‘Zulu Death Mask’ and ‘Hobo Babylon,’ Deadbolt expands beyond their designation. While still adhering to their trademark songs of the creepy threads of the American tapestry, some songs on ‘Hobo Babylon’ could actually be called beautiful (just not in ear shot of the band, mind you.) Coupled with the songs of ‘I Should Have Killed You,’ Deadbolt is a multi-layered band with legitimate talent you won’t find anywhere else.

A friend once describ 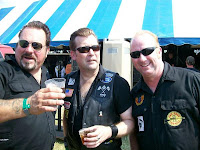 ed them as ‘guys who got together, had a blast with their guitars and recorded it.’ It’s pretty spot on because when you see a picture of the band after listening to their music, you can easily pick out that the songs embody everything about how they look and act – leather vest, hot rod, beer drinking, American men-are-men, bastards from the fifties.

Some of the other songs aren’t too friendly to the effeminate or hippies, but that’s just a part of Deadbolt that makes them who they are. If you can take a punch and drink some liquor out of a bottle with a black label on it, you’re pretty much a Deadbolt fan without knowing it.

First heard of these guys on the ‘Halloween Hootenany’ comp, which had their song ‘Psychic Voodoo Doll.’ Whenever that song came on, I knew that the comp was almost over and for many years, that’s all I ever thought of Deadbolt. After a friend told me that she had invited the band over and had a blast hanging out with them, I found their stuff and wondered what the hell was wrong for me for not looking them up sooner.

Their music is great because it’s so different. It’s evil surf. And they delve into subjects that are usually overlooked in the psycho/spooky music. African voodoo, the derelict world of hobos, hitmen and tiki men – all are given the central spotlight in Deadbolt’s music. I always thought that was neat of a band like Deadbolt. They could have just stuck with typical stock horror business, Zombies and devils and all that shit.

But they’ve always reached out beyond expectations. I haven’t seen them live but their shows detail sparks, snake dancing and probably at least three casualties per performance. Professionals, Deadbolt. Complete professionals.