Next year marks forty-years since the first Alice Cooper album, which makes him a prime candidate to kick off a Blood of Your Father’s theme for a couple of days. Alice Cooper, in music and performance, has been a stalwart of spooky for over four decades. Though, Vincent Price yesterday sort of started BoYF, which–if you can follow–had Weird Jon lead me to the discussion of ‘evil’ over at Tough Pigs, which then had me think about what was said of Alice Cooper’s appearance on the Muppet Show:

>”There’s a kind of cheerful teenage nihilistic savagery behind Alice’s act — like he’s taking all the fears of mainstream 1970’s America and saying, yup, we’re gonna destroy everything you hold dear. We’ll seduce your daughters and blow up your schools, we’ll sell drugs and wear ugly clothes and we don’t care what you think about it, because we’re beyond your bourgeois rules and laws. 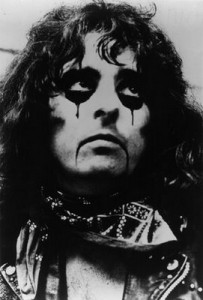 We don’t need to go much into Alice Cooper’s life – he was born Vincent Furnier in Detroit, moved to Phoenix, started a group and got signed to Frank Zappa’s label. After hits with ‘I’m Eighteen’ and ‘School’s Out,’ his career took off and got out of hand where his alcoholism nearly killed him. He’s sobered up, learned to play golf (and got a good score) and he currently performs, records and hosts his own syndicated radio show. There’s a lot of biographical information you can find about Alice. If you want to get that back issue of Rue Morgue with the piss-poor write up of the great ‘Earth E.P.’ I talked about, it’s got Alice on the cover and you can get a crash course in the man. Or find the VH1 ‘Behind the Music’ somewhere on YouTube.

Music wise, Alice has never been pigeonholed. He’s always been refining himself with the passing of time. Listening to his seventies albums is as efficient as any time machine. Same goes with his releases for the eighties and the nineties. He’s always had that signature voice and songwriting but he’s never been confined to a specific decade. Alice has been able to adapt, to change his appearance so he doesn’t come off faded or irrelevant. It’s probably why he’s still performing today with not the jaded dismissal usually reserved for Led Zepplin or The Rolling Stones.

I prefer his earlier albums, though having not heard them all, it’s hard to say. He just released a new one and I will give it a listen. Even a bad Alice Cooper album isn’t that bad of an experience. I would relate to it as pizza. Pizza and Alice Cooper are rarely so bad that they’re inconsumable. I do like ‘Man behind the Mask’ and not just because it’s the theme to ‘Friday the 13th VI.’ (Careful, that link contains massive amounts of codpiece.) Admittedly, the author (Matt) reads a little too much into the episode. While his write-up is an accurate description of the impressions of Alice Cooper at the time, a zeitgeist of the time when he was considered dangerous, it seems to ignore that such sentiments embodied by Alice were nothing terribly new. Old v. New, young & wild v. tried and established. Blah, blah.

While I think that he read a little too much into the Muppets episodes, I think that’s his job. It is, after all, a Muppet site and if he wasn’t going hog wild about it, he might as well not try at all. But I think he missed the point. The eighties brought about the sanitation of our media, and that’s such a horrible thing. Alice, god bless him, came about before then and was able to plow right through. Sure, he was thought of as a devil and a deviant. But he wasn’t the first.He was taking on a different medium, though. Alice was a horror show rock star, and he had/still has a great show. The man admitted that his whole act was ‘vaudeville,’ and it’s exactly that-vaudeville, a performance. It would also explain why he, along with Vincent Price, appeared on ‘The Muppet show.’ Imagine any of the shock-rockers of the mid-nineties, and ask if Marilyn Manson, Slipknot or the ilk would show up alongside a felt-puppet and sing? It’s a ludicrous thought. Those bands took themselves entirely too seriously, and in that lies their fatal flaw.

Alice has been dangerous, but I don’t think he’s ever been scary. He’s been serious, and he remains talented in my opinion. A man doesn’t perform for forty years without a modicum of talent or at least the intelligence to maintain a steady fan-base.

But if not scary, Alice Cooper has, in my opinion, been spooky. His songs like ‘I Love the Dead,’ ‘Teenage Frankenstein’ and ‘Devil’s Food’ have captured some of the best spirits of the season. But he’s always been there for some fun along with the music. I think you can laugh at an Alice Cooper show. You couldn’t laugh at a Manson concert and that’s what done him in. For when it’s hard to laugh, it’s easy to say ‘fuck you,’ and that’s what was said to Manson. I’d be rather distressed to see someone say ‘fuck you’ to Alice. Why? Because Alice knew the difference between spooky and scary. Scary was alcohol addiction that threatened his life. ‘Scary’ was buying too heavily into the performance and not maintaining the health of the actor. ‘Scary’ was taking it too seriously. There were real scary things in life and ‘Black Widows’ and ‘Cold Ethyl’ didn’t do it – but spouse abuse in ‘Only Women Bleed,’ well fuck. That is scary. Alice has always been one to point that out and I’m grateful for him.

I think Alice Cooper set a good example for many horror-based musicians and acts to follow. I think the ones starting out today could follow his path as they forge their own. He’s a saint, that Alice. God bless him.