AVOID AT ALL COSTS 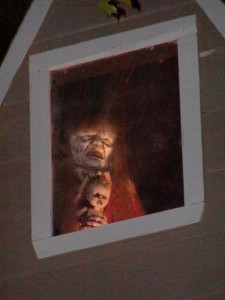 Starting in 1979 as a maze with craft paper walls, the Harvest of Horrors eventually rose to become Cape Cod’s premiere haunted attraction. So when I visited this attraction back in 2000, I was quite excited based on its reputation. Unfortunately, my visit occurred when they were doing a look back at the history of the Harvest. The problem was that a large portion of the attraction was merely old props and promotional material in display cases, with only a few scares towards the middle and end.

Although seeing stuff from their old days was quite interesting, it wasn’t what I was expecting. I thought I’d be going to a full haunted house, seeing as all the advertisements only noted the new “Furnace of Fear” part. I would have liked it better if the retrospective was a separate attraction, but I suspect that they didn’t have the space available for that.

Getting back the scares, they were mostly variations of people jumping out and yelling. That said, the “monsters” had very good makeup jobs and were well prepared for calming scared children while in character. Also, the set design for the final “Furnace of Fear” room was very impressive. The best part by far was the stage show that preceded the haunted house. Although it is possible to skip the stage show and go directly through the haunt, this is highly unadvised. The dialogue and performances were hilarious and the pyrotechnics were spectacular. The show changes every year and the one I saw dealt with the Showman and his dimwitted assistant Shredder dealing with Pyro, an insane handyman (with designs on the Showman’s job) who they hired to fix the Furnace of Fear.

When I had originally exited the Harvest of Horrors, I was much more negative about the experience until I learned about the small number of people who operate it. With that in mind and knowing that I wasn’t visiting during the Harvest’s usual setup, I was able to give a more balanced rating. Thankfully, the staff seems to have increased since then. Not only that, but the commercial on their website and the comments on “Nye Manor” seems to imply that the Harvest has grown larger since my 2000 visit. If you have the chance and you’re in the area, you should check it out. If nothing else, you’ll have a blast watching the show.

I should also note that there’s a toned-down, “Kids Fest” version of this haunted house open during the daytime. According to the website, this version is open Saturdays and Sundays from 11:00 am to 3:00 pm starting the first weekend of October and tickets are $2.00 per person.

UPDATE: Judging from their Facebook page, the Harvest of Horrors was converted into a haunted hayride and trail back in 2012.

Special thanks to Harvest of Horrors for use of the image!

Bad Behavior has blocked 1748 access attempts in the last 7 days.