..at least, not today. But it’s Friday, the first Friday of a great October so far. It’s starting to get cold, Fright Haven has opened up (which I’ll go after the initial rush.) Today is an easy day for the Strange, which is why I’m going to give a double-header of two bands formed after The Misfits.

So. Strange enough, this is another group I found through the previously mentioned radio station. Except, I didn’t find the beloved version fronted by Glen Danzig, backed up by Jerry Only and Doyle Von Frankenstein (and a shit load of drummers in between, most famously Robo.) No, I found ‘Famous Monsters,’ which then had Michale Graves as the singer and Dr. Chud as the drummer. 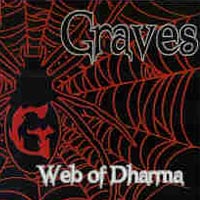 First off, there’s Graves, with ‘Web of Dharma.’ Dr. Chud and Michale both played on it. It’s a decent EP, nine songs of classic punk rock with a death twist. I can’t see any song on ‘Web of Dharma’ being a Misfits song. It’s kind of nice to find that there’s more to these guys. It’s more accessible as death punk, I’d guess. It’s fast, upbeat and not bad. There’s a slow song in ‘Ophelia’ which, being that it came out around 2001, has that late nineties metal sound to it that was fashionable around the time. It’s easy to hear the difference between Graves and the Misfits, which probably means that Chud and Michale ditched the group for some more musical freedom. I read that Michale has an accoustic show going around, which I missed when he rolled through my town. I actually regret not going to see Michale Graves, and I don’t know what to do about that. 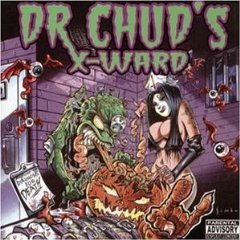 Dr. Chud’s X-Ward flirts with metal on a couple tracks like the opening song ‘Powerless,’ ‘Spiderbaby’ and of course, on ‘Heavy Metal.’ An EP itself, it has three flavors – metal, punk, and do-wop. Songs like ‘Mommy Made Love 2 An Alien’ could translate easily to a do-wop or a Ramones song. ‘Bury You Alive’ is also like that; there’s a direct connection between punk and the Fifties street music. Dr. Chud kind of stretches out with all flavors in a neaopolitan sampling. The fact that Chud’s singing and not stuck behind a drum kit should give him som props. And he’s not that bad of a singer.

Why not talk about the Misfits? Because I would be more inclined to talk about the Beatles. If you want info about the Misfits, there’s a good chapter in the book ‘American Hardcore’ about them and if there’s enough fan sites dedicated to them already, I don’t need to add to the trash pile. Death rock, Misfits. Yeah. We know.

‘Famous Monsters,’ and the other post-Glen Misfits album ‘American Psycho,’ AREN’T bad records. They’re shitty Misfits records if you hold them up against the standards – ‘Legacy of Brutality,’ ‘Static Age,’ and the rest.* But on their own, they’re not that bad. I didn’t like ‘Famous Monsters’ at first because it sounded a little too rock/metal for my tastes. But now that I’ve put some time between me and then, I have a better appreciation for the fake-Misfits. It’s a shame that they didn’t start a band with a different name because those two records wouldn’t have the stigma around them and might have gotten a clean break.

So, when Michale and Chud left the group (for bullshit I’m not going to get into because I’m not THAT kind of Misfits fan, one who has followed the politics of Jerry Only mismanaging the reuinion or Glenn Danzig’s ventures into music which has never turned me on) the two of them started a couple of bands:

So. If you think that the Misfits aren’t the Misfits without Glen, I’d agree. If you passed up the two studio albums that came after, I’m sorry. They’re not that bad and you should check them out. Also, you should also give these two EPs a listen. Together, they make a decent eighteen-song, 51:33 listen. It’s better then holding your breath or chanting WE ARE ONE-THIRTY-EIGHT at a Danzig show.

*Earth A.D. and Wolfsblood? Not my cup of tea. It’s clear where Glen wanted to go, and he went. He just didn’t take the Misfits with him.