A little something different here. 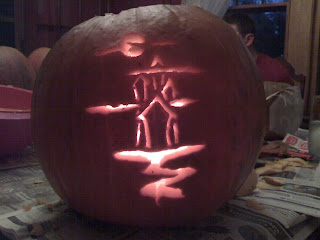 If you recognize the design, I skipped over the windows of the haunted house and the pair of bats that were flying from it, a decision done out of growing impatience more than aesthetic reasons. I had suspicion that it wouldn’t matter, because Gourdon’s top was rotted away and there was evidence of more rot around the pumpkin’s top. While my friends were lifting their pumpkins out of the patch by the stem, I had avoided doing that and IN doing that, completely missed the clear evidence that Gourdon was a bad pumpkin.

Yesterday, I and a few friend of mine went out to a pumpkin patch to pick up some potential Jack-o-lanterns. About twelve bucks and thirty minutes later, I had a pair of pumpkins and was ready to head to the carving table.

My friends had picked up a couple kits with some stencils. The kit was okay for costing four bucks but if I ever decide to be serious about carving the fuck out of a pumpkin (or any other gourd/melon, depending on the time of year) I would search down for a better kit.

What a foolish hand and a serrated edge, I was able to carve a design in the pumpkin I had named ‘Gourdon.’

The carving was fun, hanging with friends was fun. I had brought some music that made everyone laugh. Overall, it was a good day and that’s what Halloween is about – doing odd things with your friends. Life is a bit monotonous unless you have holidays where you can dress up and act a little different. Getting some candy for your troubles is a little bit of a physical reward, but when you get older, the act itself is worth more than any bite-sized Snickers bar.

I keep that appreciation for the moment in mind because Gourdon didn’t last the night. We’re having some unusually warm weather here. Warm weather is DEATH for pumpkins, especially those with thin line designs like Gourdon’s. Maybe if Gourdon wasn’t rotten, he would have made it to Halloween but the gross mash that was around his top had spread all around. The house fell in on itself and I had to chuck the pumpkin.

I see it as a metaphor for life. I was careless in initial choice, regretful for discovering my oversight, overambitious in my designs and impatient when my intentions didn’t come naturally. Because of a lack of knowledge and poor decisions made, the project failed. But out of failure came a lesson to learn and an appreciation for those moments shared with friends. It’s better to carve and lost then never to pumpkin at all.

If you’re reading, let us know you’re here. Leave a comment about your own pumpkin carvings, the ones you successfully did or ones that fell apart under the weight of your own genius.

Bad Behavior has blocked 1459 access attempts in the last 7 days.