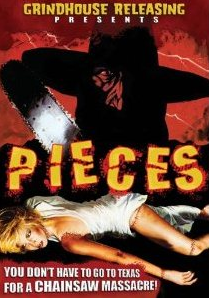 Get this: the movie I reviewed immediately after Winterbeast also has a connection to Massachusetts! This time, it’s a gory horror flick set in Boston called Pieces.

The movie opens in 1942, with a mother catching her son diligently working on a puzzle depicting a naked woman. Furious with her son taking after her lecherous husband, she trashes the room and prepares to burn all of his porn. The boy’s response? Ax murder. Flash forward forty years, the little boy is all grown up and feeling remorseful about the whole “dismembering mom” thing. After a co-ed skateboarding into a sheet of glass reminds him of his mom trashing a mirror, he sets out to recreate his mom using parts from unwilling donors. As the body count at an unnamed college campus keeps rising, Police Lieutenant Bracken and undercover officer/tennis champion Mary Riggs (played by 70’s TV regulars Christopher George and Lynda Day George) take up the case. They also team up with the lover of one of the victims, Kendall James, in order to find out the killer’s identity and end his chainsaw rampage. Is the murderer the nervous comparative anatomy professor, the burly groundskeeper, or some other person?

Originally released in Spain under the title “Mil Gritos tiene la noche” (roughly translated as “One Thousand Cries has the Night”) in 1982, Pieces plays out exactly like an over-the-top stereotype about what a slasher movie is like. In other words, a flimsy plot coupled with wall-to-wall nudity and gore. What separates Pieces from the typical horror film is all the hilarious (and often bizarre) moments randomly distributed throughout the movie. There’s a completely random sex scene, an out of nowhere appearance by Bruceploitation legend Bruce Le, a topless chase sequence, a victim wetting herself, the “who cares if it doesn’t make sense, it’s scary” ending, and so much more. Interestingly enough, the urination wasn’t a special effect. You see, the chainsaw got a little too close for the actress’ liking and the director chose to leave the embarrassing shot in the final product.

Grindhouse Releasing’s two disc set marks the first official American DVD release of Pieces. The widescreen transfer from the original negative blows away all the cropped, VHS-sourced transfers offered by cheap DVD labels. It’s a testament to the quality of the special effects that they still hold up even after the film was digitally remastered. As for the audio, the English and Spanish mono tracks are both clear and problem-free.

I highly recommend watching both the dubbed version and the English subtitled version. This is due to how the Spanish version is edited slightly differently at the beginning and has an original soundtrack, whereas the English version uses stock music that wasn’t prepared for the movie. Also, the English subtitles reveal that there are several differences in dialogue between the original and dubbed version. It seems like the person who put together the English dub’s script inserted humorous material to amuse themselves. The people at Grindhouse Releasing seem to feel the same way about wanting people to see both, since they included a link to the Spanish opening sequence in the “Features” section of disc one.

The other special features on disc one include animated menus, chapter stops with the murder scenes marked in red, and the “Vine Theater Experience.” Selecting that option plays a short film of people at a recent showing of the film and then plays the audience’s reactions along with the movie in 5.1 stereo. Oh, and hitting up when the cursor is on “Play Movie” will lead you to a hidden icon that will play Eli Roth’s (and others’) comments on the film when clicked on.

Moving on to disc two, there are two interviews that clock in just under an hour each. The first one is with director Juan Piquer Simón, who discusses the making of the film and his career. The second features Paul Smith (who played the groundskeeper), who details his life and film career along with a few insights on his role in Pieces. Simón’s interview is subtitled while Smith’s is in English. The “Cast & Crew” section provides filmographies and/or biographies for several people involved in the film. Each entry has bonus content, either in the form of an interview segment or a preview for another film that the person was involved in. The numerous still galleries show production stills, publicity photos, and box art from various video releases. One of the galleries, titled “Juan Piquer’s Still Show,” is actually a video of the director showing off various publicity material, the original puzzle prop, and even the magazine whose cover art he licensed to use in an alternate Spanish poster for Pieces. Rounding out the special features are the numerous previews for current and future releases from Grindhouse. Two Easter eggs, one featuring Paul Smith and the other dealing with nudity and the casting process in Pieces, can also be found on this disc: One can be found by hitting up when the cursor is on the “Main Menu” option in the “Interviews” menu and the other can be found by hitting up when the cursor is on the “Main Menu” option in the “Galleries” menu. Just click the chainsaw icon that appears and you’re all set!

Also worthy of mention are the liner notes, written by Deep Red’s Chas Balun. When unfolded and flipped over, the liner notes form a small reproduction of the film’s American poster. Be warned that the notes, like many of the special features, contain spoilers.

My only real complaint about this otherwise flawless release is how there’s a missing English subtitle about one hour, seventeen minutes, and thirty-four seconds into the Spanish language version of the movie. Thankfully, I (and anyone who took high school Spanish) could tell the unsubtitled line was to the effect of “Get the car, quickly!” and could still enjoy the movie. Some may dislike how the packaging overlaps the DVDs in such a way that you have to remove both discs in order to get to the second disc, but others might just swap it with another DVD case and think nothing more of the issue. To anyone interested in checking the film out, I say this: please do not let these small matters keep you from getting this DVD.