Cat in the Brain 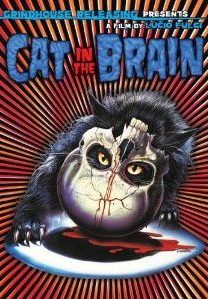 It seems that Lucio Fulci has directed one gory horror movie too many, as hallucinations plague him at every turn. Being offered steak at a restaurant makes him flash back to a man feasting on human flesh and hacking up a corpse with a chainsaw, while seeing a cameraman filming him for a documentary makes him hallucinate about a Nazi orgy and attack the woman interviewing him. To make matters worse, the psychiatrist he visits for help is even crazier than he is! Using hypnosis, he makes the director’s hallucinations worse and makes it so that he’ll think he’s guilty of the murders after hearing a high pitched noise. That way, he can commit a series of murders and use Fulci as the fall guy. Which madman will ultimately take the blame? You’ll have to watch the movie to find out!

Cat in the Brain, also known as Nightmare Concert, was originally released in Italy as Un Gatto nel cervello in 1990. The film’s biggest claim to fame is the fact that it’s mostly comprised of footage from other films that Fulci or his daughter, Camilla, were involved in. These films include Zombie, Touch of Death (aka When Alice Broke the Mirror), The Ghosts of Sodom, Massacre, The Beyond (music only), Bloody Psycho (aka The Snake House), Escape from Death, Hansel and Gretel, and The Broken Mirror (aka Don’t Be Afraid of Aunt Martha). Sometimes the stock footage is used to represent movies while other instances are supposed to be actual occurrences or madness-induced visions. Due to the clever nature of the editing, it’s often hard to tell whether or not the events playing out onscreen are supposed to be real or not. This, along with the repetition of certain elements (Flashbacks to death scenes, eerie moans, people being slapped and Fulci’s attempts to reassure himself he’s not the killer) in the movie also adds to the effect that the viewer is becoming as mentally unbalanced as the main character.

While not as unintentionally funny as Pieces, Cat in the Brain still has its fair share of laughs. Although the scene of a cat eating some grey matter is an interesting way of demonstrating the protagonist’s initial descent into insanity, the cat puppet utilized for the scene is hilariously awful-looking. There’s plenty of over-the-top gore and ludicrous kills, such as a decapitation via storage chest. Lucio Fulci is definitely a better director than he is an actor, as his hammy acting is obvious even when dubbed over. Although the editor made a valiant effort to seamlessly blend all the different footage together, there are times when it’s obvious that the killer isn’t in the same location as the victim. For example, it may be early evening when the psychiatrist is going after a victim in one scene, while scenes featuring the victim will be occurring in broad daylight!

So, why make a movie out of so much stock footage? There are actually several theories on the matter. Some feel that Fulci was getting sick of doing horror films and wanted to do a movie that explained his dissatisfaction to the audience and yet had enough violence and gore to keep his fans happy. Others have volunteered that Fulci wanted to create a movie so gory that it would be impossible for distributors to edit out the gore and still have a feature-length film, as his films were often censored by distributors in other countries. However, the most popular theory seems to be that Fulci was trying to provide social commentary on the public’s response to his work (especially critics). This seems to be the most likely possibility, as the film has Fulci noting that nobody would buy tickets if he made movies about love and the antagonist remarks “[d]oesn’t that stupid old theory say violence onscreen provokes violence” during his plot to frame his patient. “Stupid” is certainly an appropriate term for that theory, since numerous film editors and movie critics would be homicidal maniacs if this were true. This theory also explains the massive use of stock footage. Let’s face it, doing a movie about Lucio Fulci playing himself would seem ridiculous if they didn’t use stuff from his old movies in some way. Also, using stock footage was probably the cheapest way to get a lot of gore scenes (which was probably Fulci’s way of poking fun at people who said his films had too much gore).

Grindhouse Releasing pulled out all the stops for their deluxe, two disc release of Cat in the Brain. In fact, I understand that this release marks the first time the director’s cut was released on DVD in America. This would explain why their release is nine minutes longer than Image Entertainment’s 2002 release. If that wasn’t enough, the extras alone make this a definite upgrade for those who purchased the Image DVD (more on those later). The film is presented in a beautiful anamorphic widescreen transfer with both English and Italian mono tracks. Seeing the original quality of the footage used in the film’s trailer shows just how much work Grindhouse put into remastering it. Both audio tracks are crystal clear and are complimented by removable English subtitles.

The special features for disc one include animated menus and chapter stops, the original Italian trailer, the US trailer created by Grindhouse Releasing, a slideshow made up of various production stills and promotional materials, and a twenty-odd minute Q&A session with Lucio Fulci and his interpreter at the 1996 Fangoria Weekend of Horrors convention. Disc two offers several interviews, biographies/filmographies for Lucio Fulci and Brett Halsey (the cannibal mentioned earlier in this review), and previews. As usual, the filmographies come with interview segments or trailers for films that the biography subject was involved in.

There are two 1995 interviews with Fulci (“Genre Terrorist” and “The Television Years,” both of which are subtitled), a single English-language interview with Brett Halsey from 2005 and a few brief (subtitled) segments under the banner “Memories of Lucio.” These include comments on Fulci by Jeoffrey Kennedy (who played Inspector Gabrielli in Cat in the Brain), Sacha Marsa Darwin (who played the woman in the oven in footage reused for Cat in the Brain), and Malisa Lango (who played the unfaithful wife in Cat in the Brain). These mini-interviews are actually promotional snippets from a DVD called Lucio Fulci Remembered Vol. 1 by Paura Productions, who seem to be connected to Tempe Video in some way. Getting back to the “main” interviews, they clock in around forty-someodd minutes each and cover a variety of topics. Brett Halsey discusses his career, coming to Italy and his thoughts about footage of him being used in Cat in the Brain during his interview, while Fulci discusses his career, television, his dislike of psychiatrists, and the making of the film (among other things).

Rounding things out are the liner notes and two Easter eggs. Although the liner notes by Lucio’s daughter Antonella Fulci, horror novelist David J. Schow and Hostel director Eli Roth are informative and offer some insight on the possible meanings of the film, they’re also chock full of spoilers. One Easter egg can be found on disc one by highlighting the Fangoria option on the “Special Features” menu and hitting left. This leads to an icon that, when pressed, plays a clip of Fucli signing autographs at the Fangoria convention. The other egg can be found on disc two by highlighting the “Main Menu” option on the “Interviews” section and hit left to reveal a clip of Lucio Fulci discussing television and the difficulties he had in getting things accepted. Oh, and the first 2,499 DVDs come with a limited edition lenticular cover. Actually, the official number is the first 2,500 DVDs, but since I already got a copy…

Special thanks to Grindhouse Releasing for the review copy!

Bad Behavior has blocked 865 access attempts in the last 7 days.