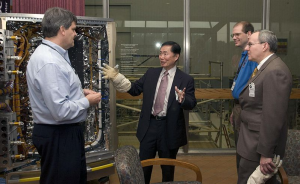 I recently discovered that May is Asian Pacific American Heritage Month. Seeing as the GdL strives to be all-inclusive, I haven chosen to celebrate by devoting this entry to the famous Japanese-American named George Takei. Although most people think of him as “Lt. Hikaru Sulu” from Star Trek or the funny guy who joked about raping Tim Hardaway, Mr. Takei has done so much more than that in the world of horror/sci-fi.

George Hosato Takei (now George Hosato Takei Altman)was born in Los Angeles, California during the year 1937. He began his Hollywood career doing uncredited dubbing work for the American versions of Rodan (1957-US version) and Gigantis the Fire Monster (1959-US version) (aka Godzilla Raids Again). Decades later, Takei would reveal the rationale for the bizarre (and out-of-date) “banana oil” line during an appearance on Late Night with Conan O’Brien. Another noteworthy event in his early acting career was his appearance on a controversial (and somewhat supernatural) episode of The Twilight Zone called “The Encounter” in 1964. Perhaps drawing upon the time when his family and he were forced to live in internment camps during World War II, Takei played a young Japanese-American and the tension he faces with a racist WWII veteran.

In 1966, he got a part on a show that made him famous: Star Trek (1966-1969). Not surprisingly, he also appeared in the animated series (1973-1974), the various Star Trek movies (1979-1991) and an appearance on Star Trek: Voyager (1996). His fame from the Trek franchise (and his talent) also led to appearances in other genre films and television shows, such as his appearances in the sci-fi western films Oblivion (1994) and Oblivion II: Backlash (1996). This was followed by an appearance on the television series Space Cases (1997) and a part in the movie Bug Buster (1998). More recently, he has appeared in AI Assault (2006), the short film Showdown of the Godz (2008), an episode of Star Wars: The Clone Wars (2009) and a role in the animated movie Scooby-Doo and the Samurai Sword (2009). Personally, I find his role in Showdown of the Godz to be particularly interesting, as be plays the fictional owner of the real-life Monster Sushi restaurant.

For those who want to read about the non sci-fi/horror aspects of George Takei’s life and career (including his work in politics), I recommend visiting the following:

The above PD image was photographed by Bill Hrybyk and is taken from Nasa.gov