Throw back the coffin lid – and RISE! 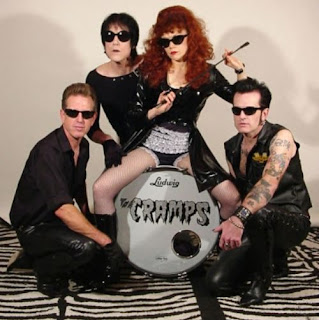 If the new internet-based society has done anything right, it’s increased the access to knowledge, perhaps to the a fault; instead of having a bereft of knowledge, the isolated youth in the far corners of the country, nay world, might have too much. Instead of starving, they’re overwhelmed.

“A cornucopia of sex and horror.”

– Poison IvyIt’s up to us to pass around the word, to let everyone know about the Cramps. Ain’t like they’re some best kept secret but it’s not like they’re first on a girl’s lips when it comes to the question of ‘what music do I listen to now, as I’m stuck in this room or in this town?’ Ain’t gonna front like my blood had bled black for years. I’m a new recruit and see that years have been wasted not knowing about this band, so I spread the word with the zeal of the kid who first discovered the unexplored world underneath another person’s clothing.

So, it’s still up to you, dear reader, to make sure that those creepy kids know about The Cramps.

The Cramps were a band I could have used growing up. When you’re spooky, freaky or just plain nerdy in life, a band like the Cramps can give a neophyte that much needed subtle ‘fuck you’ attitude that can keep a teenage mutant going from day to day. That attitude, damn. It’s one of the fantastic things about this band, this band that blended roots rock and rockabilly with the new brash attitude of punk. The Cramps were a sexy middle finger, rigid and stiff. Listen to them and what you can hear is a confident swing of the hips, a swagger or a grin from a face that isn’t beautiful but damned, there’s something pretty powerful there when it smiles.

A lot of sex in the music, which is good for the undersexed ball of lightning and hormones that might be collecting, storing up in your neighborhood. Pass along a copy of ‘Songs the Lord Taught Us’ and have them YouTube the videos deemed ‘unsuitable for minors.’ It’s corrupting, sure, but in the way a sly whisper might be, a great reveal that life can be sweat, fun and not boring at all. Things can be as wild as you want it to be, if you want it to be. Sunglasses after dark, my son and daughter.

That’s spooky, a call to the chemical bits of living, the pumping blood and adrenaline rushes. It’s getting scared and liking it. I think the Cramps captured that attitude, of both being the monster and being chased. If we chalk them up as a band for the season ‘cause they sang about werewolves and creatures from the black (leather) lagoon, we miss out at the core reason of the season, of the guttural reactions that make us howl at the moon. Spooky is being wild and untamed and the Cramps were about that.

Lux Interior (singer) and Poison Ivy (guitar) were the founders and firebearers for the band, surviving the many band members that come and go. Husband and wife. Pulse and throat. A wild combo, whether it be the sight of the rock goddess belting out licks on a sexy hollow-body guitar or the wildboy rolling around in skintight pants and high heels. Together, they made beautiful music. ‘Songs the Lord Taught Us.’ ‘Bad Music for Bad People.’ ‘Smell of Female.’ Goodness, gracious. Great balls of fire. 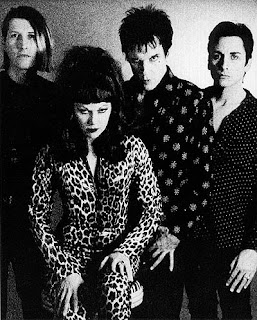 My recruitment came, like it did for other musicians I’ve come to enjoy, too late. I only knew of the brightness of the person’s light when it was extinguished. Lux Interior passed away this past February, leaving behind his wife of thirty-seven years and a legacy that continues on. For those in the horror rock community, Lux’s passing at 62 was the death of rock and roll. He didn’t die young, nor was he too old. He died from aortic dissection, a terrible condition that might be easy to romanticize if it wasn’t so fatal. Finding that Ivy and Lux were married that long was, for a newcomer like me, something as astonishing as their music. Rock music is hard on a marriage, but to see two people maintain their relationship for so long clues anyone in that these two individuals were clearly made for each other. As lucky as fans of the Cramps are for the music they made, Lux and Ivy were much more fortunate to find such another that they could live, work and thrive like they did.

This Halloween will be a season that needs your Cramps records. Things are a little bit colder this year. It’s going to be a string of nights to bundle up the best you can, though if you can bust out the black leather and high heels, do it. Light a candle, light a fire. Wear the sunglasses. Blast the music. Tell all that you can.