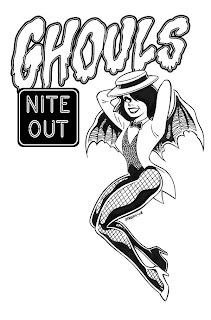 Hopefully, dear reader, you have a copy of ‘The Mourning After,’ the record GNO put out. On that release was Amy Von, who would leave to pursue her own career. And proving that being a possible undead psychopath that could flay the skin off your body and feed it to her cat (allegedly) doesn’t mean being without principles, Myra decided to work on some new songs.

I saw GNO back in May and they played the new songs. I tell you, they’re fucking. fantastic.  I hyperbole you not, reader.  The arrangements are incredible and the new songs showcase the range of Myra’s vocal talents. They describe themselves as ‘if the Misfits ‘spent the night’ with The Trashwomen,’ but I think GNO has taken the best elements of their influences to produce something better.

Lucky for us, GNO will be recording their second album this fall. But we shouldn’t rest, oh no. Reader, if perchance you haven’t, go over to their website. Listen to the ‘The Mourning After,’ as they have a free stream of it. If you like it, buy a copy. Send an email and say ‘This is fantastic, and we look forward to the new album.’ Go to their Myspace page and listen to ‘The Rage,’ one of those new songs. If you’re in the area, make the trek to Worcester, Massachusetts on the 30th to see them play with Creepin’ Cadavers and the Cretins. If you like rock, if you like spooky, if you are either dead or alive or both and in that plane of existance there is a modicum of good taste inhabiting your physical or corporeal presence, then show some support and spirit for GNO.