There’s a moment of parity ‘tween us here at the Local and the world of Hip Hop in the movie ‘Scratch,’ a documentary about Turntablism and the rise of such hip hop mad scientists like Q-bert, Kool Herc. DJ Shadow stands in an underground reserve of vinyl stacks, talking about the importance of ‘digging,’ or searching for the perfect beat. Digging for DJs involves a constant search for the next beat, seeking out the next great hook, the right sample.

If yours is the romantic eye, you can see them as urban Templars always seeking out the next Grail. Or, if you adhere to a different philosophy, these are the evolved insects in human-suits, rifling through the mountains of discarded plastics to make something worthwhile. What eyes you sport matters most when digging dirt. Only worms dig without eyes. 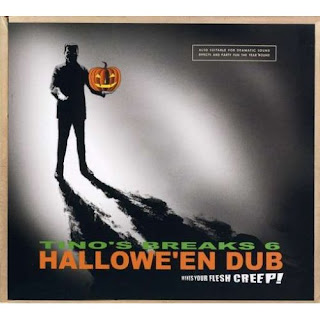 Similarly, I keep digging for new spooky music (as should you.) I came across something different than usual – Tino’s Breaks Vol. 6.

Released on the Tino Corp. label, “owned” by the mythical Tino, the releases are developed by Ben Stokes (Dimensional Holofonic Sound) Jack Dangers (Meat Beat Manifesto) and Mike Powell (Bo Square). While they create albums full of sounds and beats for other turntablists to use, sample and build, there have been a few Tino’s Breaks that have been dub albums. Instrumental reggae. Or in this case, instrumental hip-hop.

I fell into some dub something in 2004, finding it more enjoyable than reggae itself. Living in an old industrial providence somewhere outside the capital region, there was Sir Walford broadcasted on the college radio every Monday and Saturday. Driving around to grab a cheeseburger, playing some dub while the sun shone down on a cold Fall afternoon remains a constant and favorite memory. He’s still out on the air, every Saturday afternoon. If he ever played from this album, wouldn’t know.

Vol.6 is the Halloween release. You’ll find on this release some really laid back music, as is the case with dub. It’s a lot of funky beats, deep bass; definitely much different than death rock or psychobilly. My favorites on this are ‘Wolfman is Everywhere Dub’ and ‘Zombie Walk Dub.’  The music is very playful. It’s easy to groove to it, while doing what you need to in preparation for the big night. It could also be a good way to break up some monotony of your evening’s music if you need something a little low-key. Check it out here and wherever you can.