The Truth Behind The Exorcist 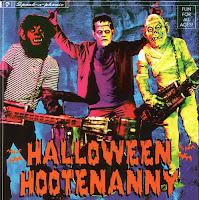 Rob Zombie once had a record label and it was AWESOME. Along with the first Ghastly Ones record and a release from The Bomboras, Zombie A-Go-Go records put out one of the best Halloween compilations ever to grace this land – Halloween Hootenany.

It’s amazing who’s on this and amazing to think that I heard most of them for the first time because I happened to swipe this copy from my college’s radio library (you don’t have to be so underhandedly as many copies are going for cheap on Amazon. I need to pick up a spare myself, since I’m afraid I’m going to wear mine out.) Incredible to think that I first heard the pure massive sonic bodyslam that is was Rocket From The Crypt on this album. Their song, ‘I Drink Blood’ is one of their best and highlight why the band, gone from this earth four years this Halloween, is missed.

The album is bookend by narration from famed horror host Zacherle, who even joins Southern Culture On The Skids for a wonderful cover of Creedence Clearwater Revival’s ‘Sinister Purpose.’ Other covers include Los Straitjackets doing their version of ‘The Munsters’ theme song and The Amazing (royal) Crowns rocking out to Screamin’ Jay Hawkins’s, ‘Little Demon.’

The real standout of the comp is up front, where Rob Zombie joins The Ghastly Ones for ‘Halloween (She Gets So Mean).’ It’s a roadhouse circus with a burlesque side-show of a song, with Zombie’s trademark whirling voice against the Ghastly One’s garage-surf sound.

The Ghastly Ones are all over this album, offering their first version of ‘Banshee Beach’ (later found on ‘All-Plastic Assembly Kit,’ then on their ‘Unearthed’ release.) In addition, The Born Losers play ‘Werewolf on Wheels,’ a song written (and I suspect secretly performed by) The Ghastly Ones.  Surf and fuzz are well represented on this comp, with even the legendary Davie Allan playing with The Phantom Surfers on ‘Extrasensory Deception.’

Deadbolt, Frency, Satan’s Pilgrims, the Swingin’ Neckbreakers, Dead Elvi and The Legendary Invisible Men are also found on the record, giving a wide candy bag of treats for your Halloween pleasure.   It kind of bridges the gap between the ‘This Is Horrorpunk’ comps and all the other rocka/psychbilly comps out there.

Add it to your library this year.
(Note, thanks to R. Zombie’s loveable incoherence, the lyrics in the video below are PROBABLY not accurate. Take it with a grain of salt.)