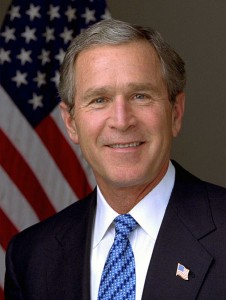 Imagine my surprise when I came across an article by Psychotronic Video’s Michael J. Weldon, which claimed former US President George W. Bush was involved in the making of the 80’s horror classic The Hitcher (among other R-rated films). Although very interesting, I was dismayed that Mr. Weldon did not provide any references. After much searching, I finally found what I believe to be the list of films briefly referred to in the article, which emphasizes how the films contained the sort of content that’s often decried by conservative Republicans. While this also lacked any references, it did provide some quotes and comments that I could look up online. A little online research confirmed that Bush was an outside director (which is not like a film director) for Silver Screen Management and that “My only interest was for the company itself” was a real quote by him in reference to the company raising funds for R-rated movies and how it contradicted his prior criticism of the alleged “pervasiveness of violence” in the entertainment industry.

Now I’m sure many of you are still curious about Silver Screen Management (aka Silver Screen Management Services, Inc). Said company was founded by one Roland W. Betts, who had gone to Yale with Bush in the 60’s. SSM organized and managed a series of limited partnerships under the name “Silver Screen Partners.” Said partnerships were used to raise money to invest in feature films. I don’t know if it’s true or not, but it won’t surprise me if at least some of Bush and Betts’ earnings from SSM helped fund their investment group, which purchased the Texas Rangers.

So there you have it: It seems that George W. Bush is the first US president to be involved in the making of a horror movie in some way.

The above PD image was photographed by Eric Draper and is taken from Defense.gov