The Valley of the Robots 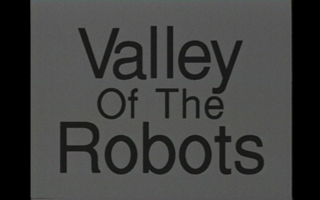 Written and Directed by Ross Wilsey

If granted the power of omniscience, I doubt anyone would notice a difference in my attitude. Perhaps I would be a little bit meaner, a little less joyous at knowing at all times the common atrocities occurring within the universe, about how effortlessly a person can inflict pain on another for those unjustified greedy and pathetic reasons. Witnessing  would threaten to strip away what kindness I have left, what grace and possibility for love I hold for myself and anyone in this world, leaving me a rancid, twisted animal who would pray nightly for a real, tangible extinction.

Or, perhaps, since I would know of all the different creative expressions, the moments that people said “Fuck it, let’s do this because it’s fun,” I may hold a positive outlook on life, that all this misery and death is offset by creation for the sake of joy. I wouldn’t miss out on those pockets of sincerity that get plowed under and buried by the growing disposable commercial dungpiles filling up in the streets, gutters clogged by plastic and still-twitching bodies.

It’s something fun to think about. But honestly, I don’t think I would change that much.

I’m a big supporter of public libraries and public access, of used record stores and second-hand shops. I don’t have omniscience so it’s with these trusted establishments that I usually discover what I’ve missed. The internet can only provide so much and it’s with synchronicity and the grace of the shovel that I dig up what I can.

Three years ago, someone put on ‘Valley of the Robots’ during an afternoon slot on CTV, the ‘Community-Television’ public access channel in this state. While changing channels, I came across it midway and was hooked. The language (explicit) and the inclusion of tits (fabricated) didn’t get it pulled from broadcast. In fact, it would show up twice more in the following years, but only that first half in what thirty-minute bloc it was allocated. 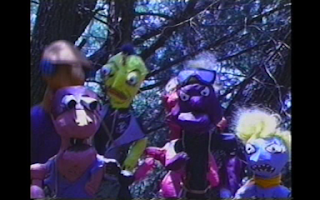 Early searches back then provided the word ‘PUPPETOSE’ though that was it. There wasn’t a name, wasn’t an address. I contacted the station to see if I could get a copy of ‘Valley of the Robots,’ mainly to see the second half. 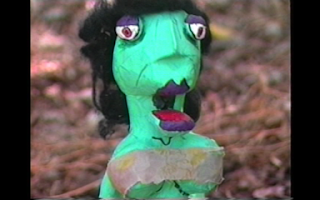 Produced by Puppetose Theater out of Austin, Texas, ‘Valley of the Robots’ (1999) is a papier-mâché post-apocalyptic play, a “corrupt fable,” from the mind of Ross Wilsey.  Seventy-six years after The Second Ruin, the earth is a radioactive wasteleand. Humanity is nothing but a shadow of what we know, twisted and mutated into gangly forms. Legend speaks of The Valley of the Robots, and the Vault of the Ancients with its untold resources of fuel, food weapons and armor. 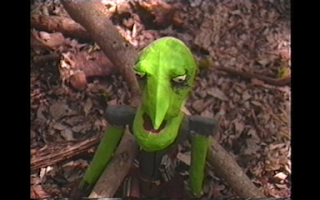 Enter Hero (“The Stranger”,) a mercenary initially working for Urknall, leader of the bandits. Instead of delivering The Card of the Ancients to Urknall, the Hero decides to use the card for himself in search of the Vault of the Ancients in the mythical Valley of the Robots. Capturing a perverted scavenger named Modus to use as a pack animal and rescuing Thornya from a one-eyed Radiation Bird, the Hero looks to evade the Urknall’s scorpion-tail arm, the Rat King and his legions and ultimately, the deadly drones inside the Valley of the Robots. 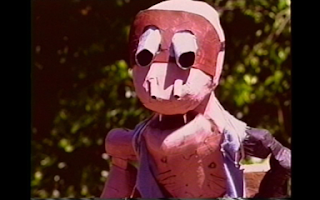 Along the journey, we are privy to puppet rape and pillaging; man-eating flowers; radioactive mushrooms; and an interlude with Eelgid, a crippled hermit living out in the forest. I must say I liked Eelgid the most.  I enjoyed Paul Novak’s go at voicing the character. There isn’t a bad voice actor in the cast. 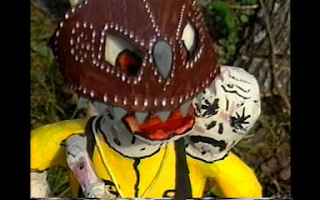 There’s slack given to a puppet play. Sure, you can see the strings or the sticks, but since it’s a puppet, the strings are part of the show. It’s not like the spotting the zipper on the rubber monster, an event that breaks the film’s illusion. The puppet mechanics are expected constructs of the performance.  They’re part of the reality. 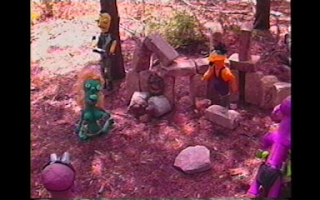 I don’t think ‘Valley of the Robots’ could be as successful of a movie if it were shot with actors and given a bigger budget. The atmosphere generated by the use of puppets was appropriate for the movie. In a world that’s supposed to be growing out of the remains of Armageddon, the lifeless and unblinking objects express a desolate and perfunctory existence.  The puppet stands in for a representation of what humanity has become. We would only see actors in makeup and latex, looking for the face under the mask. With puppets, it’s understood that there’s a performer but as a viewer, you don’t look for the person pulling the strings. You focus on the object that speaks and moves, giving it the idea that it’s alive and functioning even though it’s a construct of newspaper and paint. 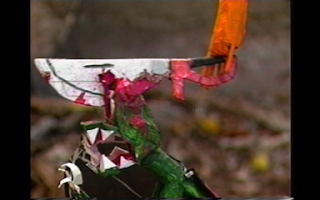 If there’s any disappointment, it involves the term ‘Raping Spree.’ It’s such an excellent line that doesn’t have the proper follow up, in my opinion. It’s a small complaint considering the carnage that follows. The ending is delightfully nihilistic and well executed.  There is no happy ending. The film would be worse off if it was any other way.

If granted the authority that all starting filmmakers should seek me out for an example of what to do to make a good movie, I would hand them ‘Valley of the Robots.’ Puppetose shows that a production shoe-stringed by budget should never letting the fact get in the way.