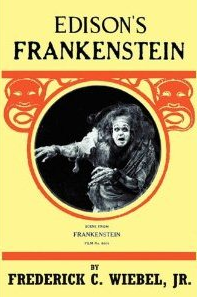 Originally debuting as a self-published work in 1996, Edison’s Frankenstein is back in an expanded and updated edition that’s more than double the original’s page count (along with a tie-in DVD-R release of the film). And the timing couldn’t be better, because 2010 marks the 100th anniversary of the original silent Frankenstein film’s release!

Author Frederick C. Wiebel, Jr. presents a wealth amount of information in a way that never seems boring or “dense” to the reader. Not only does he chronicle the complete genesis of the silent film’s creation (including reproductions of short film’s “script” and intertitles), but the book also covers the history of early American cinema and the Edison company (along with biographies of the film’s stars and details on company founder Thomas Edison). Some horror fans might be tempted to skip the non-Frankenstein portions of the book, but that would be a very foolish mistake. I found the biographies of Charles Ogle (who played the monster) and Mary Fuller (who played Dr. Frankenstein’s fiancée) to be particularly interesting, due to how Mr. Ogle’s career changed and how Ms. Fuller was involved in the creation of movie serials. I was also surprised to learn that Warner Brothers and Universal both owe their existences to Edison Studios.

Other chapters cover the creation of Mary Shelley’s original tale, stage adaptations (and how they may have influenced the monster makeup used in the 1910 film), other Frankenstein films (and the 1910 version’s possible influence upon some), and the saga of formerly “lost” film finally getting released on home video. There are plenty of pictures from a variety of sources, with the ones from the titular film and other silents being of understandably lesser quality due to the well-worn nature of their source prints. A few other pictures are somewhat pixelated, possibly due to the conversion for the .PDF file for the e-book version (more on that later). According to an email conversation I had with the author, there were no such problems with the original scans. On the plus side, most of the pictures look great and many of the Universal Frankenstein’s monster pictures should be familiar to (and please) monster kids old and new.

Like many, I had assumed the scant few film clips available from the film in the 90’s were the only usable scraps from otherwise completely deteriorated film reels. The truth was that there was an honest-to-goodness conspiracy to keep the film from being released in full!

You see, the only surviving copy of the film was purchased by a film collector named Alois Dettlaff sometime in the 50’s. Although he did work on preserving the film (including making copies), he did not realize the value of this particular acquisition until many years later. After inquiring among other collectors to see if they had copies as well, Mr. Dettlaff soon realized that he was the only game in town. But although the film’s public domain status allowed him to release it himself without paying any royalties, it also meant that anyone would be free to make and sell copies themselves the split second the film was made publicly available. So, aside from a few one showing only theatrical screenings, Dettlaff limited the film’s release to clips he licensed out. It’s almost unfathomable to think that a film described as being lost in countless books on horror movies (including ones written for children) could be shown without anyone catching on and calling a local news service. But it happened. It wasn’t until Fred Wiebel saw a clip on a television documentary and became inspired to see where it came from that the truth became known.

Edison’s Frankenstein chronicles the numerous difficulties Mr. Wiebel had in his dealings with the late Mr. Dettlaff, such as numerous cancellations for events and struggles over getting the film to be shown without a watermark. And then there’s the Dettlaff limited edition DVD (not to be confused with the DVD-R associated with this book) and the experiences that others had with him. The Oscar story is definitely not to be missed. Considering all that, it’s amazing the author didn’t just give up out of sheer frustration. Well, that, and discuss the trials and tribulations in a way that doesn’t demonize the deceased film collector. In fact, his final notes on the matter come in the form of a memorial of sorts for Dettlaff.

But what of the film itself? Buying the book directly from the author or buying the CD-R/DVD-R e-book combo will get you the restored DVD-R immediately, and those who get the paperback edition from other sources can still order it separately using the instructions found at the back of the book. The disc art is based on the labels used for Edison Records’ “Diamond Discs,” which gives it a neat “What if Edison made DVDs” feel. Said artwork is printed directly on the disc, so fans need not worry about any of the issues associated with homemade labels. It comes in a paper CD sleeve (unless you get the e-book package), but that should not be an issue for resourceful GdL16 readers.

The DVD’s start menu uses the image most commonly associated with the film as a background and has the film’s title act as the “Play” option. The 12 minute film itself is fairly straightforward: Dr. Frankenstein is a university student who has discovered the secret of life and plans to create a perfect human being. In a very Georges Méliès-style scene, Frankenstein prepares a bubbling cauldron in order to bring his creation to life. As you’ve probably guessed, this film is an early example of a book’s plot getting heavily altered for the movie adaptation. But his giddiness over the experiment soon turns to fear and revulsion once he sees what his finished creation actually looks like. Although he initially dismisses the matter as a bad dream, aided in part by the monster’s disappearance, the reality of the matter comes back to haunt him upon his return home…

The monster, with its wild hair and pointy elf shoes, is more likely to induce laughter rather than chills in today’s viewers. However, its claw-like hands are a nice, creepy touch and the monster looks very unnerving when it’s looming over its terrified, hiding under the covers creator(aided in part by the color tinting used in the scene). The orange tinting used for the sequence when the monster is forming in the cauldron is also well-picked, with that particular tint making the formation of the body resemble burning embers in a fireplace. Although it is rather easy to figure out how the effect of a moving humanoid figure being formed from smoke and ashes was realized, it’s still a pretty neat looking sequence. It, along with the mirror sequence, must have knocked the socks off the movie-goers of the day. The only tinting that could come off as odd to modern viewers is the use of blue tinting toward the end of the film. However, anyone reading the book will realize this was shorthand for scenes taking place at night.

Although it’s not Criterion Collection quality, this restored version of the film easily blows away other versions currently online. The transfer is artifact-free and while there may be some signs of print damage, but that is to be expected given the worn nature of the original print and how Mr. Weibel was only able to work with a watermarked and altered (new title and intertitle cards) copy. Thankfully, he was able to blur the watermark and it’s not very noticeable for most of film, unless you go looking for it. I actually mistook it for a sprocket hole the first time I spotted it. There is only one scene where characters move in the “fast motion” manner often associated with silent films, but it’s very brief. “Blink and you’ll miss it” brief.

Just as how he poured through old Edison company documents for information about the film itself, the author also used those documents to determine what musical cues would have accompanied the film and was able to obtain them from vintage phonograph cylinders! According to a very informative newsgroup posting Mr. Wiebel made about his one man restoration effort (all painstakingly done on his personal computer), he purposefully didn’t clean up the scratchy thumps so as to better match the visual quality of the film. I have to agree, it’s a nice touch that compliments the film well. The “white text on plain black backgrounds” intertitles might seem overly simple and quickly made to those familiar with the more elaborate ones present in other silents. However, those who’ve read the book will know that’s how they actually looked in the original. It’s important to also remember that since Mr. Wiebel had to recreate certain elements of the film from scratch such as the intertitles and title card, this particular version of Frankenstein is copyrighted. Check out these sections of the US Copyright Office website if you don’t believe me. In other words, don’t rip the DVD transfer and sell/distribute/etc. copies. Mr. Wiebel worked very hard on this restoration and deserves to reap the benefits.

I understand that the arrangement of the text in the e-book version (available in both Word and .PDF formats) is different and several of the pictures are in color. No matter what version you choose, the book is still a must-have for both fans of classic films and horror films alike. For information on how to order your own copy, please click here.

Special thanks to Fred Wiebel and BearManor Media for the review copy!