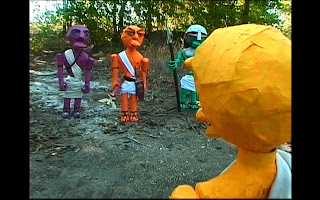 ‘An Evening With PuppeTose’ is the darkest of the PuppeTose Theatre productions we’ve reviewed so far; it’s also perhaps the most intelligent of the four. What makes it so astounding is that it is the chronologically second, following 1999’s ‘Valley of the Robots,’ with ‘Random Stories Grab-Bag’ and ‘PuppeTose Street’ following after.

‘Apostasy’ tells the story of Pracitus, a senator of a theocracy confronted with charges of heresy he openly confesses to, citing the fraudulent nature of his society’s governmental structure in the titular abandonment of all his religion, party and state. The Oracles that dictate the Gods’ will are mere constructs, a system of tubes where the real men in power whisper their perversions to willing listeners. It is Pracitus’s intention to stage a coup, capitalizing on growing unease after an unpopular war to instill a dictatorship. 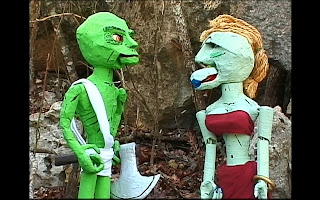 As with every PuppeTose production, it doesn’t end well. ‘Apostasy’ deals with the nature of man, god and government in a quick fashion. Here, we see a character who knows the truth of his society labeled as a heretic, but if he were to succeed in his plans, Pracitus would implant a dictatorship in the theocracy’s stead. What is dictatorship but a theocracy without gods, where one man’s will is infallible and not to be questioned? 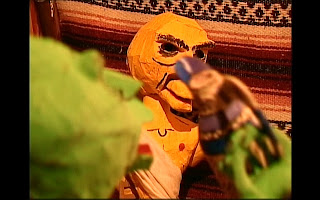 “What is religion, but recognition and suppression of natural urges?” he asks his captors after they detail the gruesome procedure laid out to rid a criminal of his or her heresy. What doesn’t get outright asked is “what is government?”

The Theocracy’s procedure for curing heresy, much like the Salem Witch Trials, leaves the victim dead but their soul cleansed. The methods do indicate the absurd nature of the theocracy; in addition, a prime example lies with Attulus, the man assigned with arresting Pracitus, who literally carries his authority with his ‘Authority Stick.’ 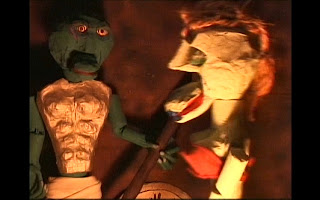 I think ‘Apostasy’ has an underlying theme of the fault of trust. Attulus and his party have full trust in the Theocracy, its gods and its methods, even though through Pracitus’s insistence that the whole system is fraudulent. It’s the arresting party’s trust in a peasant’s house that leads to Pracitus’s escape, when the peasent father and daughter turn out to be agents against the Theocracy. It’s also Pracitus’s trust that ultimately leads to his undoing. I think that ‘Apostasy’ sends the message that any kind of unquestioned-trust will turn to be fatal, which runs well with the common PuppeTose ideal. 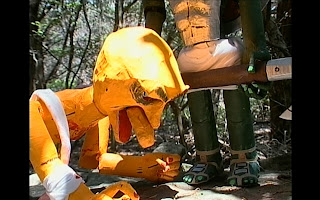 The ending mirrors much a fable one might find in any religious text. Attulus, bloodied and bruised, comes across two centurions on patrol. With no bauble or Authority Stick to prove his identity, it comes under the judgment of a nearby senator, Xenocles.  Pracitus soon arrives and fate’s hand is dealt.

The ending image is sincerely frightening. I have to commend Ross Wilsey & Co. for giving me the creeps. I’m also very impressed with the work. 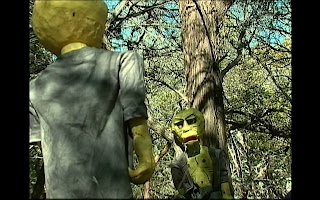 Following next on ‘An Evening With PuppeTose’ is ‘Goodbye Day.’ When a thief named Lugo double crosses his compadres to keep the stolen money for himself, it starts a chain of events that, surprise-surprise, leads to everyone getting totally fucked.

Straight up, ‘Goodbye Day’ is, of all the PuppeTose productions, the one that could most easily be transferred into a production with real actors. It would take the right casting to find someone suited to play Red Eyes, the killer who goes about celebrating Goodbye Day with the utmost zeal. I would enjoy to see someone take a crack at doing it because I think that the story here is not limited to the puppet medium. 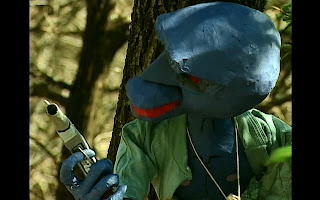 However, it’s the use of puppets applies that same distancing expression, that we’re witnessing something that is both real and unreal. The puppets here are the more complex and emotive PuppeTose characters, employing fashioned eyelids to express different emotions when needed. Through the excellent audio work that has complemented every PuppeTose production, ‘Goodbye Day’ is able to convey an sense of desolation, desperation and emptiness.

Perhaps I haven’t given much attention to it in previous reviews, but an active component in these productions is the original music. While both Ross and Ryan Wilsey have provided original scores for the PuppeTose productions, it’s through Cinco’s music that ‘Goodbye Day’ echoes the sense of life and death that embodies by the characters and its actions. 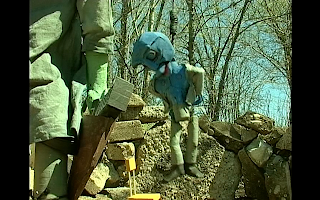 I might have bandied the words ‘Joyful Nihilism’ about when describing the world of PuppeTose. It’s so concisely displayed here in ‘Goodbye Day,’ where the main motivations—lust, greed, anger—all end up with the same result: death.

There is a moment when the protagonist, Lugo, presents a chance for one of the other robbers to leave with his life. Instead of shooting him, Lugo presents Speedy a chance to leave. I found it interesting, either possibly implying a unseen history between the two or that Lugo really has no desire to rack up a killing spree under his belt. It’s a rare moment in a PuppeTose production where a character implements mercy or a real honorable trait.

Of course, in the prior scene with him, Lugo uses the woman he was just fucking as a human shield against a vengeful cop, so who knows his which way his moral compass points? 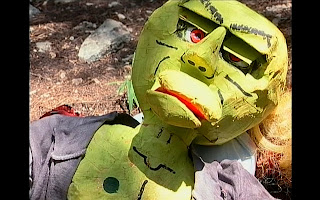 “It’s all a part of this festive day.”

I always have a soft spot for those seemingly psychotic monsters who understand that they are not in control of their own destiny, that there really is no great reward or heavy damnation. Characters that come to the conclusion that all is superficial and trite, that the earth itself is hollow and those plans of who walk upon its face are nothing but the efforts of ants collecting pebbles in the wind. Everything is fucked, think these characters, and I am fucked as well. It’s so easy to overplay these characters, making them more heartless than they should be. They need a sense of sorrow from what they’ve come to see as true; playing them cold overlooks the tragedy of their humanity.

I think that if Red Eye should be considered along the likes of other similar monsters. His motivation is summed up with the final line: “It’s Goodbye Day.” There IS NO justification for what he does, no real deep prerogative other than this day is a holiday, albeit made up, and it’s proper to celebrate.

‘An Evening With PuppeTose’ ends with ‘Down the Bunny Hole,’ a animated short that features cartoon animals fucking. With the two deeper and higher quality PuppeTose features on this release, to end it with a duck getting it on with a rabbit, I can only say ‘Why the fuck not?’

For myself, I’ll always pick ‘Valley of the Robots’ first but if I were to introduce anyone to the world of PuppeTose, I would offer ‘An Evening With PuppeTose’ as a demonstration of their storytelling abilities. There isn’t a release from PuppeTose Theater I wouldn’t suggest you check out – do yourself a favor and watch them all.

Bad Behavior has blocked 1022 access attempts in the last 7 days.