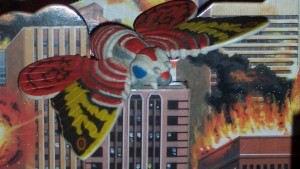 Mothra is actually based on a serialized Japanese novel called The Luminous Fairies and Mothra.

Mothra was supposed to battle the unused monster Bagan in a never-realized 1990 film called Mothra vs Bagan. Elements of that script, along with the similarly never made Godzilla vs Gigamoth, were utilized in the 90’s version of Godzilla vs. Mothra.

Mothra is said to bear a resemblance to an European Peacock Butterfly and Atlas Moth.

During the DVD commentary for the South Park episode “Mecha-Streisand,” series co-creator Trey Parker revealed that his favorite Japanese monster movie is Mothra.

After finishing Gravity’s Rainbow, author Thomas Pynchon was rumored to have been working on a Mothra novel. However, this turned out to be untrue.

In the movie Pokémon: Giratina and the Sky Warrior, Mothra’s chirp is used to create Giratina’s cry. The film was distributed by Toho (better known as the studio behind the Godzilla movies) in Japan…

In the American dub of The Magic Serpent, Mothra’s chirp is used as the voice of a giant bird. Similarly, the film’s dragon now has Godzilla’s roar and the giant toad uses Rodan’s cry.

The popularity of Mothra among women in Japan prompted Toho to make the 90’s version of Godzilla vs. Mothra.

When Mothra was released in America, the distributor suggested that theaters should display radioactive materials in their lobbies in order to build publicity for the film!

Eagle-eyed daikaiju fans might notice how the eyes of larval Mothra are red in her cinematic debut, yet they turn blue in Godzilla vs. Mothra (aka Godzilla vs. the Thing in America). In fact, they stay that way for the remainder of the old school Godzilla movies).

If you look at official reference guides, Mothra is much larger than Godzilla when she appeared in Mothra and had to be scaled down for her appearances in the Godzilla franchise.

Bad Behavior has blocked 1118 access attempts in the last 7 days.