They say it starts showing up earlier every coming year…. 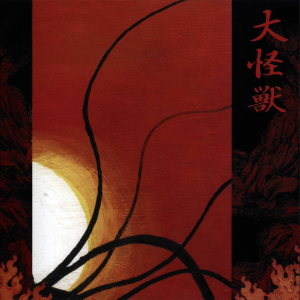 Not to be confused with the similarly-named anthology series, Daikaiju is a surf band known for music influenced by Japanese monster movies (hence the name) and the kabuki masks worn by the four band members in order to hide their identities. Thankfully, the band’s origins are much less mysterious.

Daikaiju first appeared in 1999 in Alabama, coincidentally(?) the same year that the classic Godzilla movie Destroy All Monsters was set in (in the American dubbed version). After years of live performances and self-released CD-R singles, the band teamed up with Reptile Records. This resulted in their appearing on the 2003 compilation album Heavy Surf and the band’s self-titled debut album in 2005 (which I’ll be reviewing today).

Being a huge fan of surf music and Japanese monster movies, it was only natural that I’d stumble across their music and enjoy it. But even if they had used a different theme, I’d still love the wonderful mix of guitars and drums. This is definitely a case of music making the gimmick and not the gimmick making the music.

“Daikaiju Die!” starts things off with pounding guitars and drums, then later mellows out for a spell. It gets very reverb-heavy, picks up speed and mellows again in a return to the style of beginning and builds for a big ending. If you like this, you’ll definitely enjoy the rest of the material on the album.

“Attack of the Crab Women” has what can only be described as a “classic” style opening. The strumming speeds up and drumbeats get mixed in and some parts have much in common with prior track. This song is also an example of how modern surf bands (especially horror-themed ones) can do songs that evoke things associated with surfing and the beach without actually being about surfing.

“The Trouble With Those Mothra Girls” has a slowish opening, but the strumming and cymbal beats gives it a light and quick feel. But if those parts symbolize the little handmaidens, then the song revving up at points is probably a reference to their gigantic protector coming to save them (and destroy any buildings that get in its way). After “Mothra” subsides, we get a drum “solo” coupled with some light guitar work before it revs up again and fades out.

This particular song is quite special to me, as it was one of the songs I used on the proto-GdL16 Halloween countdowns I did on my old Myspace account. It started as me changing my profile song to something spooky every week or so in October, but Strange Jason suggested that I add reviews and articles to the mix in 2008 (even offering to do the same on his page). Although that part of the countdown eventually turned into Gravedigger’s Local 16 and never appeared on Myspace, the use of spooky profile songs went ahead as planned.

“Sharkakhan” starts off speedy with heavy undertones, like a massive beast swimming beneath the waves. It eventually speeds up even more and lots of “wet” reverb is heard until it goes back to original style. The title and tone of the song bring a giant shark monster to mind, like some distant, terrestrial relative of Gamera’s foe Zigra.

“Showdown In Shinjuku” opens with loud, heavy guitar use that sounds like massive footsteps. As things speed up, one can easily imagine a fast-paced brawl between two giant monsters in Shinjuku, with their loss and regaining of energy suggested by the alternating pace of the music and the drum-dominated ending signifying the final blows. “The Daikaiju Who Loved Me” has an appropriately soft, slow guitar intro, which then gives way to energetic beat that sets the tone for the rest of the song. It’s almost Latinesque in its use of guitars at times.

“Son of Daikaiju” is another fast-paced Daikaiju tune, but it’s still unique compared to other songs of similar pacing. For example, there’s an interesting guitar riff scattered throughout the song and cymbals come back into play here and never let up. “Incognito” has an interesting effect on its opening guitar. It’s kind of like “beatnik surf,” especially the drum use. This also has a “Latin” sound at times.

“Super X-9” has heavy, speedy opening that implies technology then launches into a surf beat. Said beat is very fast and powerful, just like the fictional flying superweapon that inspired its name (although the “real” Super-X only made it up to a third model). It slows down at times, but loses no sense of power and quickly speeds up, like a flying battleship performing a complicated maneuver that leads up to its big, fast-paced finish.

“Farewell to Monster Island” is the final and longest track of the album. The soft, slow opening has a definite melancholy feel to it. This is followed up by a cool, “tropical” riff and the drum beats and guitar that follow convey the feel of floating away on a long, slow boat trip. Although the majority of the song evokes someone feeling sad to leave (or sad that its the last song), there are occasional upbeat parts (as if remembering one can always return to Monster Island/replay the CD). This is tied with the first track as my all-time favorite Daikaiju song.

If you’re a fan of surf music and/or Japanese monster movies, you definitely owe it to yourself to check out Daikaiju’s work. Speaking of which, they’ve recently released a download-only single called “Flight of Garuda” (also the name of their previous tour) and are (as of this writing) in the middle of their “Double Fist Attack Tour!”

Special thanks to Daikaiju for the review copy!