For this installment of the Freaky Tiki Surf-ari, we’ll be taking a side trip into the world of neo-exotica. What is neo-exotica? From what I can tell, neo-exotica is exotica music made using synthesizers and other electronic music equipment in addition to classic exotica instrument standards. It’s a close cousin to another exotica offshoot, space age pop, and the bands that make it tend to have fewer members than old school exotica groups.

Although the term is never used in the following Amazon writeup, I still think it also helps describe how Kava Kon is a neo-exotica band: “Kava Kon is an electronica lounge duo. With heavy influences in exotica, bossa nova, electronic, cocktail lounge, western, and 1950s-60s hollywood sound. They make music for the lounge crowd and all of the Tiki heads.”

According to the band’s Myspace blog, Kava Kon was formed by Nels Truesdell and Bob Kress in 2004 as “a magical escape from the urban decay surrounding them in their former home city of Detroit.” In 2005, they released their first album Departure Exotica and followed it up with Tiki for the Atomic Age in 2009. The cover art for both was done by the talented Heather Watts. 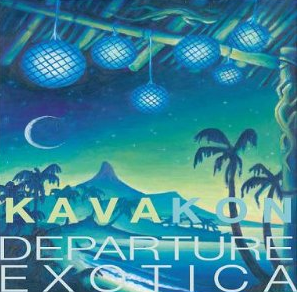 Departure Exotica starts things off with “9 Hours,” which features two guitars: one slow and plodding while the other is much faster. The music eventually stops for the sounds of seagulls cawing and rolling surf, which leads into the next track. “Chineses Pirate” continues the sounds of gulls and waves and fades into a synth beat. This is soon joined by a guiro and either a bell or vibraphone. Dreamlike and spacy sounds com into play, along with more seagulls. It gets very Hammond organ-like at times before it launches into a funky beat. Said beat is joined by light vocals, a gong, vibraphone, organ and snapping. Finally, seagulls lead us out into rolling surf.

“Oceania” continues the surf sounds and carries us to a strange synth sound I can’t identify (horn?) and percussion. There’s light use of spacey keyboard and a ukulele or steel guitar comes in later. “Laserblast” sounds and mixed with bird calls and sirenesque female vocals until the beat fades out into…you guessed it…surf sounds. It definitely seems faraway and as exotic as the name/locale implies.

“Moon Mist” begins with the ever-present sound of rolling surf, along with animal calls. Echoing vibes, like ripples in water, and bongos come into play soon after while a gong cameos at times. Light female vocals and space warp effects come in later. The vibraphone beats and vocals play off each other to give the song a “nighttime” feel. It’s like a cool, relaxing evening by the shore.

“Zombie” is obviously of great interest to readers of this website. The opening growls, strange calls and soft crickets lead into bongos, chanting and snapping claves. Said snapping sounds like sparks from fire. The organ returns as the percussion use rises, while something howls in distance. Monkey shrieks and a mournful horn join in, then maracas and vibes get added to beat and leave before it all fades out. It’s like ceremony to raise or summon something from the depths of the jungle.

“Build Your House Underground” begins with a strange tune that leads into an echoing bongo beat, guiros and female singing. Space sounds and odd, vaguely electric bagpipe-like sounds take the stage for awhile until the females vocals repeat and crackle, like a stuck record. I wonder if this was intended as a house music reference of some kind?

Rather than starting off with something associated with the desert or mummies, “Pyramid Point” begins with what sounds like crashing waves. Fast, rhythmic guiros and a funky beat soon come into play. It reminds me of a video game at times and it really picks up about two minutes in. Then it turns into dance music or something off a Kinkysweet compilation (which is not a complaint).

“Sakau Bar” pairs bongos and background tone/hum variations. Light space sounds and whispers vocals are also scattered throughout. This would be great background music at a real bar, and the effect of being at one is created by using whispers to simulate snippets of overhead conversations. Eventually, the tone pulses and overwhelms the bongos and the sounds of thunder and rain closes things out.

“Nan Madol” is a very short tune using a horn and either light chimes or vibe strikes. This is followed by “Six Eleven,” which makes excellent use of a Latin-sounding guitar coupled with clicks/snaps and spacey notes. This is followed with intelligible lyrics sung by Trisha Shandor (who provided vocals on the other songs on the album). Another spacey note underscores and replaces the lyrics while a drum machine leads the music out.

“Tiki Sunrise” is bookended with surf sounds, which is appropriate since it’s the album’s final track. The opening sounds lead into female chanting, guiros and new-agey music. Male vocals (which appears to be a clip from something) and a guitar also come into play. I think this definitely feels like an early morning at beach. In fact, one can easily imagine that the album is made up of the dreams someone who dozed off at the beach is having, hence the heavy use of beach sounds and “space” material. Not that I minded those things, mind you. 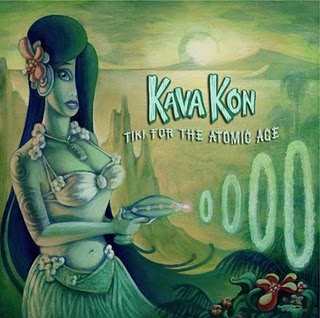 As you might surmise from the title, Tiki for the Atomic Age should be of great interest to sci-fi/horror fans. It also seems to be a reference to the neo-exotica style. At first glance, the cover merely depicts a hula dancer holding a ray gun. However, closer inspection implies that woman might be more unearthly than she appeared at first glance. After all, the flower in her hair seems unlike any blossom on Earth…

Not only does the talented vocalist Trisha Shandor return for this album, but she is joined by:

“The Atomic Clock” starts things off with drums that lead into a mysterious tune and click-clacking, like a countdown. The female vocals give the song a symphonic tone at first, but a heavier synth tone later dominates it. However, the drum machine and returning vocals revive the symphonic sound. An explosion ends everything…everything but the surf and seagulls.

“Chinese Surfer” continues the use of surf and seagull sounds, then shifts into a variety of sounds. Bongos, steel pedal guitar, guiros, chanting and grunts all come into play. It also gets rather “space”-sounding at times. It alternates between these and has a surf/exotica fusion feel to it. It all stops suddenly, only to be followed by rain…

“Cherry Rain” appropriately couples the sound of light rain with a soft tone. The sounds of a ukulele and piano are joined by female vocals (complete with lyrics), drum machine, bongos and the occasional animal call. There’s an interesting piano riff sprinkled through song that’s like falling rain and it plays off the real sound effect well.

“Turkish Honey” has flutes and animal calls lead into guiros and a Middle Eastern beat/feel. A horn joins in, as do a guitar, the Hammond organ sound and more calls. There’s a great percussive beat throughout as well.

“The Exotic Traveler” starts with chirping crickets, wind and crackling, like a dying fire. It’s very eerie, especially the accompanying organ music and vocals. Things get happier due to the space sounds and drum machine beat, although the space stuff goes in and out (as do vocals). After a distant booming, it all goes back to eerie stuff at start. Taken as a whole, it’s very much like a journey.

In “The Killing River (Without the Sun, Moon, or Stars),” a slow surf guitar starts things off and is followed by female vocals. Said vocals remind me of the deadly siren of Greek myth. The song/trip down the river then starts its beat with light, subtle bongos that continue throughout the song and are joined by vaguely Middle Eastern percussion at one point.

The sounds of a vibraphone and drums bring us “Behind The Sun,” with magic-sounding chimes and exotic percussion kicking in next. The ever-present female vocals and further chimes add to the song’s otherworldly feel. After we hear the sound of something being lit is heard, maracas and a guitar appear. Whipping and horses are heard, along with gongs. This all fades out as rumbling of thunder fades in, then guiros and drums take over. Although we get more vocals, they later stop for the rumbling of thunder in distance and rain. The title and mood of the song bring thoughts of parallel worlds populated by strange creatures behind the sun.

“Palace of the Tiger Women” opens with bird calls and chimes. Bongos and guiros plus a harp form the backbone of opening tune, with a gong taking things in a ceremonial direction. Light vibe strikes play out like tiptoes approaching the magical-sounding harp and low female vocals. The echoing end is quite powerful. We’ve clearly entered the lair of the Tiger Women in the midst of a sacred ceremony, but are they Leopard Society-style cultists or half-human creatures?

“Pacifica 66” gives us the classic (and pleasant) opening of waves at a beach. Soft, dreamy vibes are backed by upbeat bongos and birds chirping. Some form of percussion that I can’t recognize appears and it all has an old school exotica feel until the space sounds kick in. Female vocals join Lymanesque vibes and percussion. Then we are taken back to the beach for the ending. Right before the track ends, we hear light guitar work that sounds almost as if it is playing on a radio.

“Polynesia Poppies” is appropriately dreamlike, like Dorothy in the poppy field. In addition to chimes and a gong, the vibraphone and bongos make it very much like the previous song. Those are combined with a smooth blend of maracas (or is it a guiro?), gong, vibes and later a ukulele pops in. Female vocals join in with chimes for the conclusion.

Despite the name “Zero Gravity Lounge,” there are very few space sounds in this song. A guitar and drums, along with faint bird chirps get things rolling. Suddenly, here comes the organ and the chirps become calls. Similarly, the female vocals are soft at first and then everything picks up, including a theremin-like melody followed by the Hammond organ sound. All in all, it has a very lounge feel. Things wrap up with birds and a countdown, followed by a rocket launching.

In contrast with the last track, “Journey Home” is filled with spacey sounds. Bongos, a drum machine beat, keyboards and synth sounds make for a pleasant trip through space. There are even bird calls and Christmas-like bells at one point. The sound of what seems to be wind and slower-paced music, along with background chatter, wrap things up.

The music on both albums is all very soothing for the most part, although there are touches of excitement and creepiness. Based on the unexpected shifts and effects in many of their work, it seems that the folks behind Kava Kon enjoy playing with listeners’ expectations. Although it takes some getting used to at first, you’ll come to appreciate it as you listen. Hardcore Tiki purists might turn up their noses, but they’re seriously missing out on some great stuff.

UPDATE: I just realized the whipping and horse sound effects in “Behind The Sun” are references to the Greek myth of Apollo’s chariot!

Special thanks to Kava Kon and Dionysus Records for the review copies!

Bad Behavior has blocked 861 access attempts in the last 7 days.