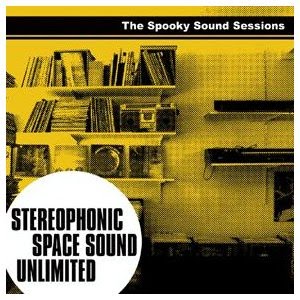 After Kava Kon, we have one more stop in our Freaky Tiki Surf-ari side trip through the world of neo-exotica, which also takes us further into the world of space age pop.

Stereophonic Space Sound Unlimited is something of a mystery to me. They don’t have any official website or social networking pages that I can find and what few tidbits of information about them I managed to find online are very brief. Their Wikipedia entry refers to them as a “Swiss instrumental band” that’s been releasing albums since the late 90’s, along with references to some projects that have used the band’s music on their soundtracks. This calls them a “Swiss instrumental/exotica/space age duo,” which makes the mention of a third musician on the CD’s back cover a bit confusing. Are they a new member or a special guest? I honestly can’t say that I know. All I do know is that these people are credited are:

Reading the CD also resulted in my realizing that the album’s title was due to the music being recorded at the “Spooky Sound Studio.” This initially did have me worried that this wouldn’t be a good fit for Freaky Tiki Surf-ari but as soon as I played the first track, I knew everything was going to be all right…

In “Do The Lurk Around,” a rocking, wailing guitar and organ open things and said things get funky fast. The organ builds up to hand claps, which reappear throughout the song. The organ usually is the main instrument used in the track, but the guitar occasionally fills that role as well.

In “Robotheque,” chimes lead into keyboards and a funky beat. Said chimes reoccur throughout the track. Guitar and cymbals soon join in, along with robot-like, beeping keyboard notes. These “beeps” are often the focus of the song, followed by guitars (both of which are backed by the previously mentioned funky beat).

“The Whistler Returns” starts with eerie bongos and guitar riffs, which gives way to a funky cymbals and organ beat. The beat feels like a lonely, mysterious walk which I suspect is an intentional tribute to the old radio series The Whistler, which opened with the sound of the spooky host’s footsteps. Although it was mostly a mystery show, there were the occasional horror aspects in it and the spin-off film series. More wailing guitar riffs follow the “walk” segment and more percussion appears toward the end.

“Gilera Baby” has a surf guitar opening with a slight Italian feel and congas further add to the beat. The rest of the song alternates between the surf riff and back beat until the reverb-heavy ending.

“Record Shop” starts off with chimes and percussion, along with a clacking sound of some kind over a keyboard beat. A vibraphone occasional cameos throughout the song, as do the chimes and knocking claves. “Contract Killer” offers a funky space beat with occasional, minor chimes. However, it also has serious undertones conveyed through the keyboards. Organ parts occasionally appear as well.

“la fille dans le train” gets things going with wild use of congas, a funky keyboard beat and minor use of some surf guitar (and a touch of mystery). The guitar gets louder and more focused later on, but it’s still only a small part of the song. It’s also coupled with keyboards, but goes back to the original style (and musical companions) soon after until it echoes out. “Re 307” has cymbals, congas and keyboards coupled with space sounds and the occasional use of chimes. A guitar later joins in with a somewhat subdued, but loud, performance. This cycle repeats itself but never bores the listener.

The guitars which start “Action Scope” have a Latin feel to them. Organ music and guiros join them, while the guitar gets more downbeat in tone and light conga use occurs throughout the track. Later, the guitars get a Latin, vaguely Carlos Santana feel to them. The opening of “November Morning,” which is comprised of maracas, chimes and keyboards, feels like a cold early winter morning until the guitar spices things up. Said guitar’s surf riff can be downbeat at times, as can the beat itself (the majority of which is formed with maracas).

The title “Chicken Skin” is slang for goosebumps, and the use of guitars and the accompanying springlike effects remind one of such bumps appearing. The guitar riff is a constant factor, as is the vaguely Middle Eastern at times beat. Congas and keyboards also play roles in this, as do the mysterious theremin-like parts.

The name “La Casa Gialla” means “The Yellow House” and is bound to remind horror fans of giallo films with titles like The_House with Laughing Windows. Organ music and guitars, followed with light congas and chimes, open the song. The interesting organ work is combined with both a loud and slow guitar for great effect. The two guitars make their use the most noticed in this particular track, with one light and in background while other is louder and more focused on by the listener.

A funky conga beat starts “Sad City,” the album’s final track, which sounds like toned-down version of first track at times. An organ and keyboard combo forms beat, chimes sometimes show up and keyboards also play a role. Although the keyboard use is often layered under the other instruments, it does get a chance to shine on own later. Similarly, the guitar riffs get solos of sorts at times. Just as the title implies, the song does have a touch of sadness to it at times.

As one of the Amazon reviewers here wisely noted, the music feels very cinematic and fits a variety of genres (including horror and science fiction). However, words only scratch the surface of this album’s greatness. It’s amazing how its unique, space age pop sound makes very little use of computers and is instead the result of the artists’ talent with “regular” instruments. You simply must listen to it in order to truly understand what I’m trying to get at. Hopefully, this won’t be the last we hear of Stereophonic Space Sound Unlimited.

Bad Behavior has blocked 858 access attempts in the last 7 days.