From Shock Theater to Svengoolie 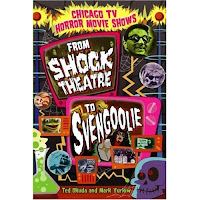 I like Chicago. It’s a nice place that has developed its own style – CHICAGO STYLE – and attitudes. A lot of great music has come out of that city, along with great comedy and in this case, great horror hosts.

‘Chicago TV Horror Movie Shows: From Shock Theater to Svengoolie’ details the line of horror hosts and horror shows that have been on Chicago airways from inception. It details those shows hosted by personalities (Mad Marvin, Svengoolie and Son of Svengoolie) and those that ran the movies by themselves (Chillerama, Creature Feature, etc.)

The book is divided, with the greater half going to the history of Chicago’s horror television. The latter part is a series of appendixes – “100 Horror Movies,” “Collector’s Corner” and others that offer a great start to get further into the world of classic (and not so classic) horror.  It’s really expansive, showing both Ted Okuda and Mark’s Yurkiw’s dedication to the subject and their respective research prowess.

It’s really neat to read about Mad Marvin, played by Terry Bennett. Sadly, at this time, there is no video footage of the Marvin character online, only that of Terry Bennett hosting ‘Jobblewocky Place,’ the children’s television show that he also hosted. As Marvin, Bennett hosted with his wife, Joy, who was known to horror fans as ‘Dear.’ Never showing her face and speaking only in grunts, Dear often was ‘dismembered’ or murdered in odd fashion every week. In addition, Mad Marvin added a group of local jazzmen –“Mad Marvin’s Dead Beats” –to play during an ‘after show’ program called ‘The Shocktail Party.’

The characters of Svengoolie and Son of Svengoolie, both Jerry Bishop and Rich Koz respectively, could fill an entire book. This book offers good deal of bits and comedy, effectively conveying what made both Son of and the original Svengoolie so appealing. With Rich Koz recently celebrating thirty(!) years in broadcasting, perhaps he’ll get a book of his own. Until then, though, ‘Shock Theater to Svengoolie’ is a great entry.

Overall, it’s a great book for those who want to learn about Chicago-based horror and have a valuable guide all in one book.