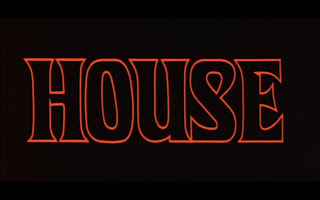 Writing will be the death of you.

Personally, I saw this when I tried to finish the 4th Friday the 13th ‘Strange Trip,’ which remains unfinished on my computer until the day comes when I can pick up where I left off. Something about either that movie or the regiment drained me. I know that I’ll have to finish it, someday but until then, it’s a ghost haunting me and this site.

Similarly, we have 1986’s ‘House,’ a story about dealing with personal demons in the form of horror writer Roger Cobb and his aunt’s haunted house.

It seems that about mid-80’s, the horror genre decided to experiment with slapstick, making a ‘splatterstick’ series of films that combined horror and comedy. ‘Evil Dead 2,’ ‘Monster Squad’ and ‘Night of the Creeps’ are examples that kind of blended things together to not make just a single spooky experience, but one that can make you scared and laugh at the same time. ‘House’ has similar elements as well.

As noted by the wonderfully detailed www.RogerCobbsHouse.com, creator Fred Dekker wanted to make more of a straight-up haunted horror feature. But writer and close friend Ethan Wiley tapped into the zeitgeist of the moment and made a horror-comedy. It makes sense, since the tone of the mid-80’s was somewhat absurd and not really into taking the themes of Dekker’s original story—personal responsibility, war, psychological damage—seriously.  What ended up was House, a movie that scored 20 million dollars at the box office off a three-million dollar budget.

Starring the Great American Hero himself, William Katt, House opens up with your Biff-in-training grocery boy finding Mrs. Hooper in the middle of killing herself. 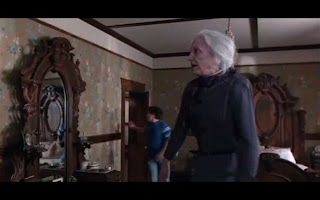 Cue the funeral and her nephew Roger being told by random neighbor that his aunt wasn’t crazy, despite the more-than-convincing behavior in her suicide. As the casket lowers, we cut to a random horror – a book signing. 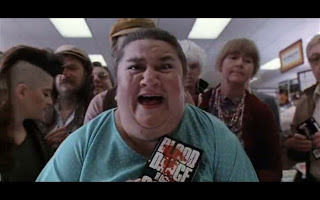 Roger’s a horror writer! How awkward, what with his life being a bit of a nightmare. Divorced, child missing, forced to eat microwavable meals that take 30 minutes to cook due to 1986-level technology. Mindy Sterling, better known as ‘Frau Farbissina’ from Austin Powers, reminds us all that his wife is a gorgeous television star. It’s kind of rude to say that people who enjoy horror books are cretins, mutants and punks but this was twenty-five years ago. Horror fans are dangerously sexy nowadays. 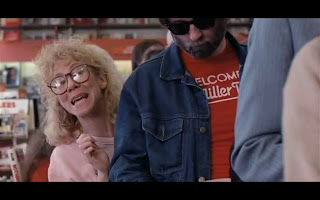 you’re much better as a brunette, Mindy
Cut from there to the lonely apartment where Roger stares into the face of the world’s biggest word processor. It’s amazing to think my cell phone has five times the processing power of that computer but thank god we’ve come that far.
He gets a call from a sparkling set of teeth attached to a woman, who turns out to be Roger’s ex, Sandy. 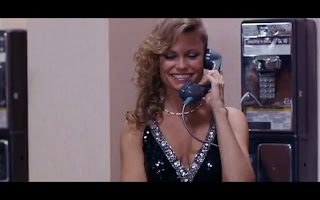 Her smile is a white million miles.
I kid. She does have nice teeth, though. That’s Kay Lenz, known for being ‘American Maid’ in the Tick animated series. Clearly she cares for him since she would call from ‘The Awards.’ You know — the AWARDS. For some reason, they couldn’t say ’emmys’ or they’d get sued by someone with golden wings. Or something.
Seems that sometime ago, Roger’s kid went Natalee Holloway, leaving no trace or Dutch socialite to clue in where what happened. This led to the divorce between Sandy and Roger.
Showing off some scarier teeth is Mrs. Hooper. 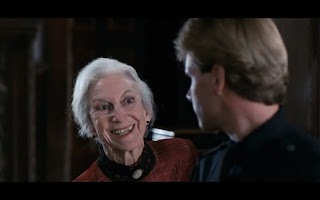 gaaaah!
Mrs. Hooper says the house in haunted and that’s the one who took Roger’s kid. This is a indiscriminate about of time in between when the boy goes a vanishing and here. The flashbacks look like this could have happened yesterday. Outside a change of clothes, there’s no real idea of how long Jimmy has been gone. Probably because I haven’t been paying attention and the scene where they say YOUR SON HAS BEEN GONE FOR FIVE YEARS, SIX MONTHS AND TWO DAYS, ROGER was when I got up to get a beer. Whatever.
Roger decides not to sell the house, probably because the real estate agent tries to kill him once or twice in a five minute period. This has him move in, trying to work out his book about Viet Nam and living next to George Wendt. 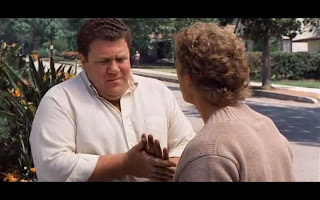 Norm!
Norm (known as ‘Harold’ in this movie) is a big fan – not because he’s fat but because in this world, everyone treats Roger Cobb as Stephen King. This is out in Marin Country, not Maine so go figure. Roger and Norm are bound to be best friends but not just yet. Roger has to be aloof to deal with his demons, which has him remembering serving time in Viet Nam with Bull from ‘Night Court.’ 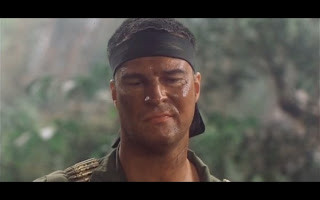 Norm! (again)
Richard Moll, known for being bald and goofy but also voicing Norman in ‘Mighty Max,’ a staple of most syndicated afternoons for you kids of the early nineties. Two actors known for playing Norms in one movie! Hot damn! Here, Richard is ‘Big Ben,’ a cocky Thompson gunner whose character screams ‘going to die soon’ whenever he appears.
Outside of seeing the ghost of his aunt commit suicide, warning him that the House will ‘get [him] too,’ there isn’t any sight of something spooky until thirty minutes in. Roger checks a closet and suddenly, we’re transplanted into ‘Hellraiser’ when some creature that’s a cross between brain cancer and a pine tree comes popping out. 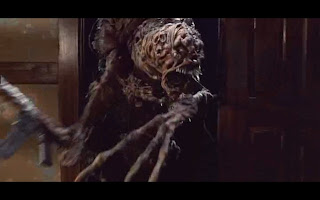 From there, the movie remembers it’s a horror flick, but keeps the tone light. Comedy comes about when the garden tools start to fly. Splatterstick. After ducking a pair of hedgeclippers and locking the levitating Home Depot in the bathroom, Roger gets surprised by his ex who has put on some weight since we last saw her. 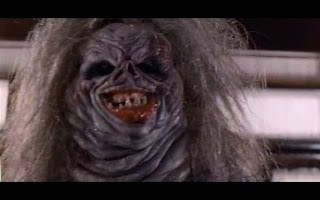 Hollywood is hell on a person’s body.
Sandy-monster dies in a goofy way and Roger disposing of her body intersects with a small subplot of the hot neighbor. A booty-shot in an 80’s swimsuit follows and a misunderstanding dealing with an odd babysitter situation that does not much but chew up a good thirty minutes.
Ultimately, we come to see through flashbacks that Big Ben got shot (what a surprise!) and while he lay dying, Roger went to get help. The Viet Cong take Ben’s still live body away and Roger is troubled by watching his friend dragged off into the jungle. Sure, Ben was a dick but war makes even the taller comedy actors act like monsters.
Norm helps Roger and some horror business goes down, leading Roger to venture into the dark world that this house tends to straddle. In one scene, Roger leads himself down on some rope and this winged terror off of some Iron Maiden album cover (non-Eddie, I must say) appears, steals his shotgun and then proceeds to shoot the rope, after twirling the gun in an impressive fashion. 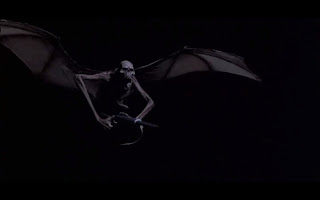 Does this look like a sharpshooter to you?
Granted, this winged monstrosity could have clawed the rope but when you got the skills to pay the bills, got to show off whenever you have an audience.
Roger finds the kid in a bamboo cage, frees him and it all seems like Happily Ever Blahhhhhhhhh until a knock at the door. And the other half of that aforementioned Iron Maiden album cover comes in. 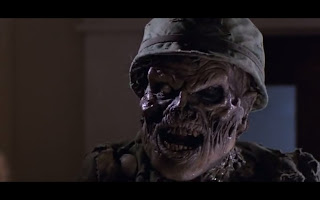 Eddie!
It’s Big Ben! He blames Roger for not killing him, leading the Viet Cong to torture him for weeks. What follows is an intensive therapy session where both men, suffering from PTSD (and one with a serious case of the zombie) resolve their issues, make a break through and reach a point of forgiveness.

Nah, Big Ben just chases Roger around the house for a while. It ends up with Roger defeating his ghosts with the power of SELF CONFIDENCE, overriding fear. I BEAT YOU AND THIS GODDAMN HOUSE he shouts. It’s kind of the whole ‘Friday the 13th’ cheese-level ending but it involves an explosion, a reconciliation and a replay of the horrible pop song from the middle of the movie. 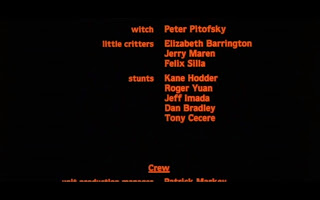 Kane who?
As much as I’ve poked fun at this movie, it’s not bad at all. It’s kind of a good movie to find on some Saturday afternoon, what some local affiliate will play because they have it in some syndicated horror move package. It’s not gory at all, only a little violent and outside of Mary Staven’s swimsuit, no sex. It’s fun, meant to convey a spooky but enjoyable experience.

You have Sean Cunningham producing, Harry Manfredini doing sound and Steve Miner directing. It was successful enough to spawn a sequel. Sort of a good supplement to the 80’s horror experience. For your slashers and thrillers, there were movies like ‘House’ that were trying to reach a broader audience – folks who wanted to be spooked but not grossed out.

Find more over at www.RogerCobbsHouse.com for interviews with the creators. Read from the script or see some of the strange merchandise this movie produced.