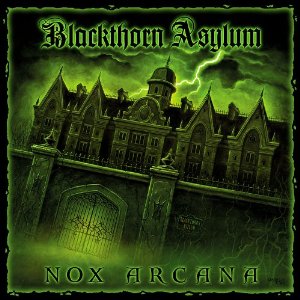 For years, I had thought the Midnight Syndicate was the only group out there doing spooky ambient albums based around a single theme. So as you can imagine, I was pretty blown away with I stumbled across the Wikipedia entry for Nox Arcana. Elated by the idea of even more cool haunt music being out there, I immediately started researching Nox Arcana.

Formed in Cleveland, Ohio by Joseph Vargo, the name “Nox Arcana” is Latin for “mysteries of the night.” Since 2003, the famed horror artist and his bandmate William Piotrowski have been cranking out albums devoted to everything from horror authors to ghost pirates.

Given that Mr. Vargo used to be a part of the Midnight Syndicate, it might be tempting for some to label Nox Arcana as a Midnight Syndicate clone. However, that is just not the case. If you go read my history of the band, you’ll find that Vargo was huge part of the reason the Syndicate adopted that style (so Nox Arcana is merely doing more of the kind of music he’s always been doing). Besides, Nox Arcana includes lots of extra bonuses with their albums, such as opening narration, bonus tracks and lengthy liner notes filled with details to help draw draw listeners further into the world the album’s music has located. They’re often filled with puzzles and injokes, too. How can you not love a group that would name a song after an obscurity like this?

Blackthorn Asylum is not merely a trip through a haunted asylum, as certain tracks and the liner notes (designed to look like a journal) reveal that an experiment that should be familiar to readers of this story by H.P. Lovecraft. Medical diagrams and coded messages can also be found in the liner notes. I won’t spoil anything by telling you what I’ve found, but let’s just say the answers will surely delight any horror fan.

“Legacy of Darkness” starts things off with rolling thunder followed by a combination of synth work, piano, pipe organ and a variety of sound effects. After the laughing, moans and screams, a crackling recording (voiced by Joesph Vargo) discusses the nature of insanity and hints at the secrets of the asylum. The title track “Blackthorn Asylum” is very scary and good for just about any scare scene or haunt. This thanks to its moody piano, chanting vocals, and synth work that alternates between medium and heavy in terms of volume and feel. The vocals, piano and synth work of “Sanitarium Gates” are relatively softer than they were on the previous track, but are still just as effective. The tolling bells are a great touch.

“Abandoned” uses soft piano notes and foreboding synthesizer work to evoke the feeling of loneliness. The wordless female vocals (by guest vocalist Christine Filipak) go well with the violins and chanting male vocals (the Gregorian Shadow Choir) and add to the sense of unease (with a touch of danger). “Threshold of Madness” has a wonderfully pounding, 80’s horror movie feel to it. Soft speedy piano work is soon dominated by pounding drums, male chanting, organ work and bells. Eerie use of a harpsichord in “Tapestry of Decay” gives the track a suitably ancient feel, with female vocals, light bells and synth notes coming in at times. Male vocals later join in for a spell and add to the sense of dread. “Hidden Horrors” effectively uses heavy synth work, an evil laugh and male chanting, followed by female vocals. The very chilling bursts of chanting and organ work in this are strengthened by low whispering and more laughter. It’s perfect to use in a part of your haunt where you want to keep visitors guessing about then something will come after them. “When Darkness Falls” couples light piano work, female vocals and soft (but somehow heavy) synth work. The plunking of keys seems like shadows growing, and the later use of bells and a violin add to the mood.

“Shock Treatment” is a soundscape that runs less than a minute in length. Thankfully, its use of pulsing, electrical shocks and screams are great for continuous looping without sounding odd. This is ideal for use with scenes based around electric chairs or shock treatment. “Fractured Memories” uses light piano work with some heavy touches, aided by synth notes, bells and vocals. “Phantasmagoria” gets the heart racing with pounding percussion, the sound of thunder and loud chanting in a language I can’t make out (presumably Latin). Thunder and rain signal the coming of the “Creeper,” whose evil laugh is often heard throughout the track. Low violins and bells make up most of the track, with moaning male chants enhanced by lone female vocals. A light, slow piano gets “Sanity Slipping” going and are later joined by more chanting, bells and the occasional use of a music box-like effect.

“Dementia 13,” named after the horror movie of the same title uses pounding notes and soft wails to get things going. Great piano work is eventually joined by bells, chanting and wild violins that add a sense of madness to the menace. The combination of piano and violins give “Solitary Confinement” a mournful feel, aided by bells and light male chanting in background. “Frenzy” lives up to its name thanks to its fast, heavy piano and bells. Vocals of both sexes also add to the effect. “The Condemned” uses pounding, heavy drums and chanting, along with a “Toccata and Fugue in D Minor”-style organ work. I love the musical “slamming” effect in this. “Spiders in the Attic” uses eerie synth (or is it violins?) and a new type of wordless female wails along with piano, bells and the sort of chanting we’re used to. Its spooky sound and long length make it great for any haunted attic or basement.

“From Beyond” is another short soundscape, where pulsing and buzzing summon up something that growls, laughs evilly and speaks backwards. “Essence of Evil” uses bells and heavy synth work, along with a piano and male chanting in Latin to live up to its name. The drums and female chants that join in later are extremely effective. “Fade to Black” opens with a Halloween-style piano open with bells and heavy synth, along with chanting and a gong near the end. Or is it? A period of silence reveals moody synth work and breathing, followed by a crackling recording about the dangerous mutated inmates in the basement. Sinister laughter takes us to another brief silence, followed by the resonator sound effects, moaning, and the backwards-talking demon.

Despite the name, the music of Blackthorn Asylum can work with haunted attractions or yard setups of many other themes besides asylums (minus most of the soundscapes, of course). The majority of the tracks are well suited for looping and for playing while distributing candy come Halloween. I’m not the only one to notice the greatness of William Piotrowski and Joseph Vargo’s music. Big-name theme parks have used their work, as have the Travel Channel and a special showing of Nosferatu. As of this writing, Nox Arcana have recently released Theater of Illusion and have contributed to another project I’ll be discussing tomorrow…