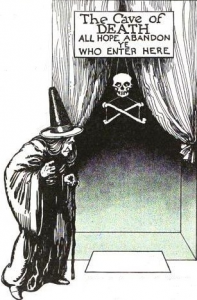 For the last two years that I’ve do this, I always think I’ve found the most dangerous and foolhardy Halloween how-to and will never find anything that will top it…only to then find something that does so. This year was no exception.

When I first read the “Mechanical Halloween Pranks” article from an October 1918 issue of Popular Science, I thought I wouldn’t have a good “Vintage Halloween Insanity” this year. The homemade lanterns were only somewhat unsafe, although use of a flashlight, LED or glow stick would make modern usage of the plans safe, while the window posters were fine. But just when I thought I had mined vintage Halloween stuff for all it was worth, then came the instructions for a witch’s cauldron scene. Although wisely telling the reader to only use real fire (and flame powder that produces colored bursts of light) outdoors, the “safe” indoor alternative of a light bulb covered by wads of tissue paper is anything but.

However, the star of this entry did not appear until I chanced upon an article called “A Halloween Chamber of Horrors” from the November 1916 issue of Popular Science. Not only is it worthy of note due to its dangerous ideas, but it’s also the earliest example of a haunted attraction that I know of, homemade or otherwise! The fact that such things existed in the early 1900’s must be a huge shock to home haunters and Halloween enthusiasts. Amazingly, this haunt was not simply a “blindfold someone and have them touch bowls full of icky-feeling items”-type deal. No, this was an honest-to-goodness walk-through attraction with several electrical effects!

The first page of the article details what one would see and experience if they had been at the haunt. Numerous “moderately severe shock[s]” are administered to visitors, with visible electrical sparks that even the writer noted would be dangerous to touch appearing at one point. Oh, and did I mention that visitors also have to kiss a baby’s skull? Don’t worry, it’s just a small fake. They weren’t THAT crazy back then. Still, I’m impressed that they came up with something that sick. Speaking of “sick,” I wonder how many diseases were contracted due to all those people kissing the same skull in the exact same spot?

The next page is filled with behind-the-scenes secrets, such as how patrons were hit in the face with raw meat and football bladders! The final page reveals more secrets, such as the use of a Crookes’ Tube (which give off cancer causing x-rays) for lighting and the use of live snakes. Said snakes (and bare skin) were covered in homemade glow-in-the-dark paint made from crushed match heads! Do I even have to explain why that’s a terrible, terrible idea? If the previous installments are any indication of the future, then I’m going to find one hell of an unsafe tutorial for the 2011 countdown…

Bad Behavior has blocked 1239 access attempts in the last 7 days.