Music to Haunt By: An Introduction

It was a pretty good first contest, here at Gravediggers Local 16. Before we go any further, we want to extend our gratitude to all of those who entered. A contest without entries is the saddest pumpkin on the block. You took time out of your day to craft together some effort – could have taken an hour or a minute – it was still time that you gave to this little website. Thank You.

We have received word back from our celebrity judges, the Freakshow Family – Bernie, Loretta and daughter, Poinsettia. We’ve tallied up the scores and are ready to present the winners of the 2010 Halloween Contest here at Gravediggers Local 16.

We received a wide range of limericks, offering our judges the chance to puzzle at the clever wordplay offered by you, our readers. It came down to Mike‘s entry that won the Grand Prize – a copy of Halloween Hootenanny on CD, a Bath O’Lantern organic vegan soap from BubbleGenius, a membership to ZombiePumpkins.com and, in addition, he will receive a pumpkin themed metal Luminary that Weird Jon has donated from his wild traverses across this haunted globe.

Mike
The Halloween party was rocking,

The zombies in top hats were shocking,
The trouble all came,
When a man with no brain,
Got caught sniffing somebody’s stocking.
The runner up prize goes to Ellen Hudson, who vividly captured one of Weird Jon’s best kept secrets – his lifelike animal calls. How she knew, we’ll have to leave to private eyes and mystic mediums. But her clairvoyance and witty writing will earn her a copy of Halloween Hootenanny on CD.
Ellen Hudson
The Gravedigger’s Local was in for a scare.
Weird Jon would arrive dressed as a bear.
He’d let out a roar,
Making guests run for the door.
Leaving the gravediggers alone in their lair.
Congratulations to the winners of the Limerick Contest! Not for nothing, everyone who submitted demonstrated a clever grip on rhyme, and we would like to share all the entries with you!
Ronni Burke
At Gdl16 his favourite time is Halloween,
With Spooks & Ghouls & Vampires too,
And the odd witch wtih witches brew,
So at Gdls Party on Halloween Nite,
Jump out of the shadows and give Gdl16 and his Followers a fright!!!!!!!
There was a young fella called Bela,
Who was a scarey young fella,
With capes and bats and blood you see
Only vampyres like him,
Scare the crap outa me!!!!!
There was a man called Vlad,
Whose life was very,very sad,
With heads on spikes,
Twas nothing he liked,
Biting necks he declared, I might like that.
(Roni actually sent in four limericks, but since the contest stated three (3) limericks maximum, we only counted the first three in the contest. Not to diminish his limerick ability, here is the fourth, which is a humdinger if ever there was one!)
Two gents called Burke and Hare.

Robbin graves was a job theyd share,
Into the graveyard theyd creep,
And dig down deep,
A fresh corpse theyd bring to the air.

It’s Hallowe’en and our party’s been drinking
So much that now we’re all stinking
We’ve crashed Gravedigger’s Local
where the owners are vocal
About wanting to know what we’re thinking.

Talking to Weird Jon for a minute
About the contest and how I will win it
But I have a strong hunch
After tasting the punch
That someone’s slipped arsenic in it!

Mike
The once was a creature from hades,
Who had quite a thing for the ladies,
At the Halloween do,
He picked one or two,
To give birth to his hell spawny babies

The party was ever so booming,
But the shadow of death it was looming,
It came in through the door,
Threw up on the floor,
And all of the guests went a zooming.

Jason Darrick
Weird Jon had a coffin full of cash.
To buy music to make sure the party was a smash.
He cleaned out the store
Bought spooky records galore
But the hit of the night was the Monster Mash.

Strange Jason had a wonderful affinity
That had party goers howling with glee
His costume was tied
His makeup was applied
And he walked the local’s halls handing out candy.

Marina Monstro
All dark and spooky on Halloween night
The party raged on with fiendish delight
As the moon rose high, there came a knock on the door
Zombies looking for brains, could this party supply anymore?
Every ran and hide from these undead creatures

The zombies moaned and reached for their heads
Spooky Jason threw what he could, zombie heads spilling out red
The nerve of those zombies, trying the ruin the party
We’ll have to use their guts and make something arty!

Jim Phillips
Pale faces looked on with distain,
at the lad looking smug & quite vain.
Though he thought “I’m the highlight,
A buff vampire from Twilight!”
He was looked on as something to drain.

Ellen Hudson
On Halloween night someone spiked the punch.
Atomic Mystery Monster lost his lunch.
No one had a clue,
Just what to do.
Drink up the punch, was my first hunch.

Surely the party would be great,
Even Strange Jason got a date.
Dressed as a cat,
She looked like a rat,
But Jason was sure he found his mate.

It was a close contest here. With a narrower field of entrants, it came down to a hair – one of Bernie’s – in deciding who would walk away with the grand prize.

But it was Ellen Hudson, whose uncanny ability to capture the Atomic Mystery Monster in art form – something photographers have failed to do for decades – won her the Grand Prize of Scarecrow brand custom fitting vampire fangs, the high end Blood Gel to go with the new fangs, Perfect Creature on DVD and Heart On anatomical heart-shaped vegan soap from Bubble Genius. 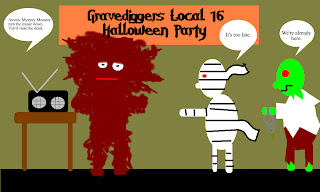 As for the Runner Up in the Art Contest, when we said it was close, it was. In fact, all three other entrants, Cheryl Dmetruk, Mike Roberts and Miss Wendy Thirteen will all receive a copy of Perfect Creature on DVD because the contest was that close. Bernie, Loretta and Poinsettia all had their favorites in the other pictures and instead of causing a family feud that might render our favorite freakshow family asunder, it just made sense to reward all entrants on their great submissions!
Cheryl Dmetruk!

And with that, the Gravediggers Local 16 2010 Halloween Contest comes to a close. With one week left until the big night, we hope that all of you have a blast getting ready for a great holiday. Thank you again to each and everyone of you who entered. Thanks to the Freakshow family for helping out with judging this year’s contest. And thanks to you, dear readers, patrons and union members. We wouldn’t be here without you.

Bad Behavior has blocked 2410 access attempts in the last 7 days.