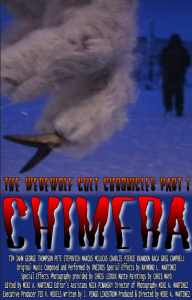 It’s been a long time since the Front Office showed how to get a free download of the movie Pig. Too long, in fact. That’s why I’m stepping up to the plate with another free movie download. This time around, it’s an interconnected series of short films called The Werewolf Cult Chronicles.

Although filmed in Sweden during the early 2000’s, the series itself is in English and spans a variety of time periods and countries, from 1916 England to Canada in the year 2019. Although the idea for the series came to creator J. Pingo Lindstrom in 2000, it was not until 2003 that the first installment was released. Said installment, Chimera, pits unsuspecting soldiers against a werewolf during an attempted rescue mission. While its low budget gives the series a rough start, director Mike A. Martinez still manages to deliver some effective and creepy scenes. The opening sequence alone is a must-see and does somewhat balance out the fact that only one of the werewolf’s hands (or is that paws?) is seen for the bulk of the creature’s rampage. However, later installments of the series do show more of their lupine stars.

According to the official website, where you can also find the downloads, The Werewolf Cult Chronicles is allegedly responsible for the creation of both the first Swedish werewolf movie and the first Swedish Vietnam war movie! And to think, they’re kind enough to let you download it for free. As it has a Creative Commons license, it might be worthwhile for budding horror hosts to ask the filmmakers for permission to use the films on their program rather than use the same old (and sometimes legally dicey) “public domain” films that everyone seems to be using these days. Said host shouldn’t let the recentness of the films bother them, as the older hosts they seek to emulate used films that were relatively recent. After all, 1950’s horror hostess Vampira showed movies from the 1930’s, the equivalent of a modern host showing films from the 1980’s. In fact, the legendary Svengoolie played 1999’s Ragdoll in 2004!

Special thanks to Penguin Films for use of the image!