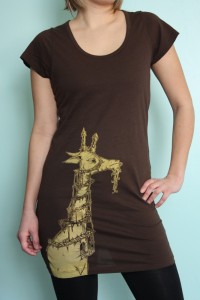 We here at the Front Office are accustomed to odd occurrences. We’re not so much in horror business, but the odds and ends of existence come with our job. We manage – since our main job description is to manage. Others, however, aren’t so well equipped. Both Strange Jason and Weird Jon seem to be wandering about Union Hall, looking worse for wear. The term “Death Warmed Over” is close, we suppose. Too many sleepless nights can do that to a worker and while the business has picked up lately, we suspect that there’s something more. Perhaps they’ve each seen something that has made sleep unlikely? Or that all that they’ve witnessed has finally caught up with them?

We don’t want to imply that the works of Spaghetti Kiss is something that would banish sleep from your mind, causing you to slowly descend into a realm of unrelenting waking madness. But if you wished to impose such conditions on yourself or all who dare witness you, Spaghetti Kiss is an excellent place to start. 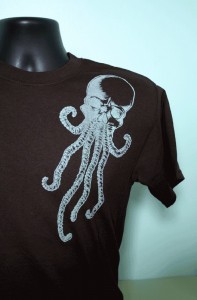 The sea is a place of frights and endless terrors in many shapes that defy the mind of man, adhering to the cruelty of time and location-evolution. Is there a land version of the octopus? No. And you know why? Because man would have the sense to hunt such an monstrosity into extinction. It’s the one thing that we have developed above the beasts – the ability to kill and kill well.

This Skullopus shirt might feature an animal that doesn’t exist in THIS reality, but it represents that multiple arms underwater EQUALS DEATH. 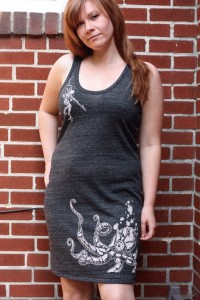 Of course, man messes with science and nature as if they were genres of fiction and what do we come up with? Roboctupus. Such a great idea – take a multiple-armed horror of the depths and make it a robot. Give it unnatural strength and remove the need for sleep. Thanks, science. Thanks a lot. 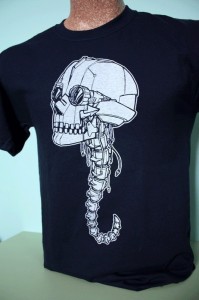 Spaghetti Kiss features the artwork of Michael Bracco, the Baltimore based artist who developed the series ADAM WRECK and NOVO. Baltimore’s proximity to the water might explain some of the nautical inspirations for the many exquisite terrors you see here and over at the Spaghetti Kiss Etsy store. Baltimore is also the famed home for Edgar Allan Poe, which might have had some influence on the man. We can’t really imagine if Poe would imagine a mechanical Skull Bot, but perhaps if he did, it would look eerily similar to the above design. 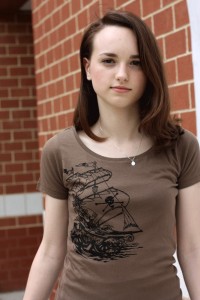 Speaking of nautical designs, this appears to be a fairly straightforward pirate ship design until closer inspection reveals that it’s a ghost ship, that most of the crew has been slaughtered and left for the seagulls and rats, only to be resurrected to float forever across the rolling waves of the dead. Attractive linework on the design, though. Ghost pirates are always a treat. 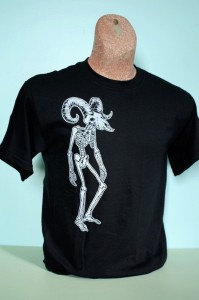 How bizarre is this? If given the choice out of all the creatures featured here, we’d take the animated skeletal remains of a beastly man creature. Perhaps it’s the humanoid features that allow us to empathize or project a certain personality to these bones? Or is it that we know many individuals who closely resemble what this fellow might look like clad in its flesh? Perhaps one day, this creature will walk through the doors of Union Hall and we’ll find out its story; along with it, we’ll likely discover some deep truths that, hopefully, we’re prepared for.

You better be prepared – to head over to Spaghetti Kiss’s Etsy Store, its main site and its presence on Facebook.  And be prepared to return here next week for another Tuesday uEtsy.