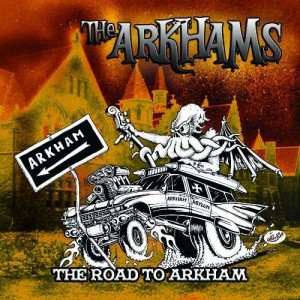 The Arkhams
Road to Arkham

As if having the name The Arkhams wouldn’t draw in the psychobilly fiends and spooky kids, the Ed Rothized picture of C’thulu on the front of Road To Arkham will definitely make your horror punker friend pick the disc up. Then, the real horror begins.

The Arkhams are one of those bands that are psycho in spirit and not in song. On Road To Arkham, there are no songs about zombies, vampires, psychotic murderers, undead love or even any of the eldritch nightmares conceived by the inventor of the band’s namesake, H.P. Lovecraft.

You know what? That is perfectly a-oh-kay. Why? Because there are roughly five-THOUSAND-other psychobilly bands with records chock full of all those songs about every horror aspect imaginable. So it’s forgiven if a band decides not to.

Does this make the band a psychobilly band, though? If I were to start up “Strange Jason the Axe Murdering Blood Bather and His Cavalcade of Carnivorous Circus Cats” and do nothing but covers of Debbie Gibson and the Chantels, would I classify as a pyschobilly band because of the upright bass player’s black pompadour? Yes, only if I do those covers with attitude.

As with small/ne niche music genres (and subsequent scenes) there is the rise of the dreaded purity test, right? Punk and Rap have well documented issues with bands that were not real enough for some crowds. Having not been involved deeply within any community to witness such trials, I come to the argument as an outsider. So, it’s plausible that there have never been a moment when an audience has looked onto an act and deemed them publically “posers” in the psychobilly scene.  It would be idyllic to have some kind of musical genre that was welcoming of all.

However, I’m a cynic and will assume the worst. Perhaps people wouldn’t take to SJtAMBB&HCoCCC even if the attitude was there. Perhaps people have talked shit about the Arkhams. If the latter is true, that’s a shame. Road To Arkham is a good album with some pure (poetic justice!) rock and roll.

Perhaps the band foresaw the possible criticism and included “I Want a Woman (Generic Rockabilly Song #8675309)” as both a dismissal of the criticism, an appeasement to their fans and a tribute to Tommy Two-Tone. Generic it might be but rockin’ it still is, along with the songs “She’s Got The Power,” “She’s Lost Control” and “Drivin’ Me Insane” – a trio of songs detailing the complicated process of having relations with someone. What makes the band a psychobilly band is that there’s a subtle implication of madness behind every song.

While it’s there in the title of “Drivin’ Me Insane,” the lyrics of “She’s Got The Power” and “She’s Lost Control” imply that there’s something more than an earthly force at work. They don’t come out and say it because, as said above, there are plenty of other bands that do that. I think, whether a conscious decision or not, The Arkhams have gone a different route to be distinctive and different.

The album is full of full body guitar riffs, stompin’ bass strummin’ and music that veers from surf explosion to roots rock. If you’re into rock and roll, rockabilly, pyschobilly, or just the kind of music that made your grandfather a punk, you’ll find that the Arkhams cover all the bases and are a welcome expansion to your library. Pick them up and expand.

Robert Frost said the worst word in the English language was “exclusive.” Let’s not be such monsters.
Comments are welcome down below about any kind of scene-snobbery you’ve experienced, or if there are some exemplar of the Psychobilly scene might shed light on this where I can only provide darkness.