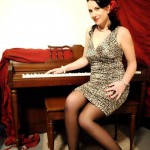 We will let the subject of this week’s A Handful of Dirt introduce herself to you, since no other words might lend her as much potency:

My name is Michelle, and I host a radio show called GO KAT GO! spinning rockabilly, honky tonk, western swing, psychobilly, surf and the like each and every Tuesday night from 8-10pm on WNHU 88.7FM! You can listen LIVE online from anywhere at www.WNHU.net!

I’ve been on the air since May 2001, but have been involved in the local music scene for nearly 20 years. My day to day life revolves around music…whether it’s at my regular day job at a commercial station, working on GO KAT GO!, organizing shows and events, promoting bands…my life encompasses the music and culture. If I’m not doing any of those things, then I’m going to see a band play live!

Help celebrate a decade of bringing good music to the airwaves by going to the official GO KAT GO! Radio site and joining the Facebook page. For those of you in the New England/North East, you’ll want to book mark the GO KAT GO! Concert Calendar, the most comprehensive of listing of music events.

What main motivating factor do you attribute as the main source of drive in your career (ed: in this case, we can say the career is the ten years of Go Kat Go Radio!.)

I’ve always had such a passion for music and the genre. It’s really just a way of life for me. But I’d say, quite simply, being able to spin and promote the bands that I love. Bands that aren’t getting exposure on mainstream radio or really anywhere else for that matter. And turning people onto a style or genre that maybe they never knew existed.

What is your music guilty-pleasure? (artist, song or album)

Oh boy! There are so many! Hahahaha! OK…here goes…Weezer (specifically The Blue Album), Creedence Clearwater Revival, Journey and 80s metal!

What meal/drink/foodstuff do you/would you make at home when you’re trying to impress people?

I am great at baking, and love to make fancy looking desserts. They take a lot of time and effort, but I really enjoy doing it, and I think it shows in the end result. Most recently I’ve made dark chocolate mousse in white chocolate shells and coffee meringues dipped in chocolate. MMMMM!

Someone decided it would be funny to transport you into a Igmar Bergman’ THE SEVENTH SEAL. When facing Death, what board game do you challenge him to play in order for your freedom?

If you could make a book required reading for all grade/high schoolers, which one would it be?

Sunday, May 15th – Be prepared to be blown away by the heavy hitting, instru-rock-surf sounds of Alabama’s DAIKAIJU along with The Headcutters at Elm Bar, 372 Elm Street, New Haven, CT

Tuesday, July 12th – The vivacious, titan-haired Los Angeles based singer/songwriter, Kim Lenz And The Jaguars PLUS The Colonel’s Original Recipe at Café Nine, 250 State Street, New Haven, CT. Rolling Stone raved, “If Elvis had been a woman, he probably would have sounded just like Kim Lenz.”

MORE GREAT SHOWS ARE ALWAYS IN THE WORKS!!! 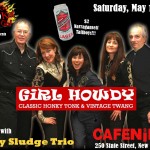 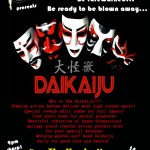 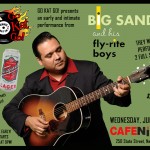 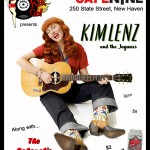 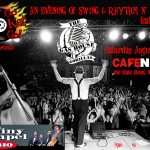 Bad Behavior has blocked 1821 access attempts in the last 7 days.