A Handful of Dirt: Tom Bagley 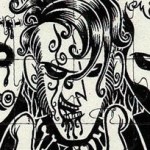 The multi-talented Tom Bagley (aka Jackson Phibes) has been involved in the world of spooky, strange and horror for over twenty years. As the frontman of Forbidden Dimension, he has produced a plethora of incredible music with that eerie bent and rockin’ beat.  As an artist, Tom’s pen-style is fantastic at capturing both the playful and the macabre. It’s highly recommended that you check out his Flickr account. You may see some work you recognize.

What’s the biggest influence on your most recent creative work?

Apart from the white lightning bolt on my dog’s forehead, I’m still into all the same type of stuff I’ve been into all my life, to a degree. I still draw power and influence from those quite often mundane stimuli.

I think a slight downside of life nowadays is all that stuff is so readily available to everybody due to the Internet, so I’m less inclined to physically go through my stacks of old horror and rock music mags and records languishing in my somewhat chilly dungeon. I can just sit at my kitchen table and look at the same images on my laptop, just like everybody else, look at (formerly) insanely rare clips on YouTube, etc. I love all those blogs that have scans of old horror comics uploaded on ’em. Very cool to be able to read all that stuff so handily.

Although now, as a result, a lot of my inspiration seems to come from actually going out and wandering around in the dusk (with my dog), looking at the weird color of the sky, the black silhouettes of the trees and power-lines, seeing skunks and rabbits lurking in the shadows, etc. I get most of my current ideas from inherent weirdness in my actual surroundings, not so much from fiction – which is probably pretty cool! It’s like with movies too, I’m probably more influenced by stuff like “Demon Lover Diary”, “Mule Skinner Blues” and “American Movie” than I am by actual horror movies themselves. I’m way more interested in how people in the middle of nowhere (like me!) get the messed-up inspiration and energy to complete their own projects and get through their often difficult lives.

I also get lots of ideas from joking around with my wife (artist Kipling West) and my spawns, who are also completely weird, creative sorts.

What unusual skill/talent that someone wouldn’t assume you had from looking at you?

Probably that I make part of my living from teaching children some of the arcane secrets of drawing and cartooning, and that the children think I’m a funny, friendly guy. I’ve been told by one the kids that her mom regards me as some kinda degenerate hippy weirdo, which is probably pretty funny, as I’ve most likely done less drugs in my lifetime than she. Ironically, none of those kids would assume that I play in a punk-ass band!

Also, that I can walk around on the knuckles of my feet. It hurts a lot more than it did when I was  8 years old!

Where’s the farthest you’ve been from home?

What is the one movie you can watch anytime, anyday?

“Legend of Boggy Creek”. Love that one. Also, “Bring Me the Head of Alfredo Garcia”. If I’m in the mood for old B&W horror, I can still watch “Night of the Hunter” or the Val Lewton discs any time. I used to be way more into the gore, but since the late 80’s, black and white old stuff is where it’s at for me. A current fave is the original “Not of this Earth”. Been waiting for that one for years!

What candy would you give your worst enemy?

Bad Behavior has blocked 1788 access attempts in the last 7 days.