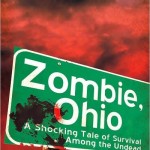 Scott Kenemore
Zombie, Ohio: A Tale of the Undead

Zombie, Ohio starts off slow but like the titular creature, picks up momentum as the story progresses on to make a very enjoyable read.

Scott Kenemore has crafted the pacing of  Zombie, Ohio to follow, step-by-step, the progression/degeneration of the main character, Peter Mellor. After awakening from a car crash with a case of amnesia, Peter finds himself in a nightmare world with “walking cadavers.” What’s even more horrific, thanks to help from his best friend Sam, Peter finds out the type of man he used to be: a professor at Kenton College in Gant, Ohio who slept around, drank and cared not for anyone else.

“I, Peter Mellor, was a disappointment.”

Things don’t get much better after Peter discovers half of his skull is missing. There are very few situations where that would be an improvement, right?

In creating Peter Mellor, Kenemore made a believable character in an unbelievable situation. Zombie, Ohio turns to be a case study of Mellor, told from his perspective. As a Philosophy professor, Mellor is greatly suited to be the narrator of his tale. Beleivably, he doesn’t immediately develop a gung-ho attitude or becomes an instant zombie-survivalist. He fails, has odd successes that come at a price and contemplates the morality of his situation more than following a predetermined set of zombie-survival rules (that everyone and their sister has, nowadays.)

The origin of the zombies is never fully explained but it never becomes necessary for Kenemore to do so. It could be magic, bioterrorism or divine intervention, all hinted throughout the book. But the explanation of why the dead have risen would be only a novelty and thankfully, Kenemore doesn’t spend too much time on that route.

Instead, through the first-person perspective, Kenemore explains how zombies function. It’s interesting to have a firsthand account as to why a zombie is, or should be, a slow moving threat. Some things we as a living organism don’t take notice of become apparent in Mellor’s development. It’s these small details that add an extra bit of charm to the book. The small details are one of Kenemore’s strengths; as he populates the novel’s landscape with small bits of madness that really work well in establishing the atmosphere of despair.

Mellor retains the majority of his mental facilities after he zombifies, which is also never clearly explained but a exchange between him and Sam theorizes his ability to an odd mutation.  Kenemore’s use of language made it easy and the character of Peter Mellor was one I found enjoyable so when it came to the half-explained rationale how he can still function with a literal flat-top, I had no trouble going with it.

As one might suspect, bring a thinking-zombie made Mellor a one-eyed king in the land of the blind and hungry. He uses this to his advantage in clever ways, showcasing Scott Kenemore’s dark sense of humor. Humor doesn’t take the forefront in Zombie, Ohio but there are some moments where I found myself smiling along.

The location (the Ohio in Zombie, Ohio) is important. The wide landscape of a rural area allows for a desolate and lonely setting. In an urban location, where corners are tight and shadows are long, it’s easier to amplify the threat of a zombie horde. It’s a bleak situation, what can be easily attained if ever the reader has spent some time in an isolated, rural area. Kenemore’s setting is perfect in expressing the utter despair of the situation and I commend him for capturing it.

Also, by choosing a wide-open space to set the novel, Kenemore draws comparison between a zombie and any other herding animal. By stripping away a bit of the horror that makes a zombie a real monster, Kenemore presents the zombie as something more natural, if it can be thought of that way.

The story is divided among three parts: Peter Mellor first attempts to conceal his zombie nature; after an incident makes him reject humanity, he wholeheartedly accepts who he is; and in the last act, he must make the decision of who he’s going to be, either man or zombie. Along the way, the mysterious nature of his death is brought up and solved.

It’s a good read. It does have a slow start and there are some details in the novel that I personally wouldn’t have done. These things are personal aesthetics. Though the mystery of Peter Mellor’s death is a lure, it’s not as prominent motivator for the story. Some might fault a few off-notes but I wasn’t frustrated. In a display of his skills as an author, Scott Kenemore demonstrated a great mind of a storyteller.

In the end, Zombie, Ohio is definitely a good read. As a debut novel, it shows that Scott Kenemore has a great supply of wit, creative ideas and potential. I look forward to his future works. For those who want an interesting character study or those looking for a nice way to get into zombie literature with a neat character, I would definitely seek this book out.